During the interwar years, mourning and political exploitation were often closely linked in the commemoration of those killed in the First World War. While the development of German war cemeteries in France and Belgium began in the mid-1920s, numerous military cemeteries in Eastern and South Eastern Europe were not inaugurated until the end of the Cold War. At present, German commemoration is marked by the idea of reconciliation and the conviction that the death of millions was futile.

During the War Years↑

Whenever it was possible, soldiers buried their fallen comrades, established cemeteries, and decorated the graves. It was mainly in the sections of the front where there was tough trench warfare that permanent sites were established even before the end of the war. At first a department of the War Ministry was responsible for the graves. With the increasing numbers of casualties the conviction spread amongst the officers that every fallen soldier should obtain his own grave. The officers of the War Ministry repeatedly stressed that a definite decision about the design of the cemeteries should not be made before the end of the hostilities.

Articles 225 and 226 of the Treaty of Versailles obliged the contracting parties to maintain the graves of soldiers buried in their respective territories. During the immediate post-war years the German Ministry of Foreign Affairs tried to repel French and Belgian claims that they had to take over the costs for the German cemeteries. In response – and in contrast to other countries – a private association, the Volksbund deutsche Kriegsgräberfürsorge (German War Graves Commission), took over the task of collecting money, designing cemeteries, advising relatives, and finding graves. The Foreign Office and the Ministry of the interior were active behind the Volksbund – albeit very much in the background.

From 1925, Germany began designing the sites in France and Belgium. In Germany, there are also war cemeteries for the German soldiers killed during the First World War – as well as individual graves in civilian cemeteries. However, their number is much lower at 124,655, as very few fallen soldiers were transported to Germany after 1919. Manfred von Richthofen (1892-1918), whose remains were brought to Berlin in 1925, is one prominent example. Most states refrained from transporting their dead home for financial reasons. France was a notable exception: 40 percent of the fallen soldiers who could be identified were brought home by request of their families.

After the Second World War, the Federal Republic of Germany and its former wartime enemies signed bilateral agreements to arrange the maintenance of war graves from both world wars (for example, in 1954 with Belgium and in 1966 with France). In many theatres of war the soldiers buried their dead in the sites that had been established during the earlier conflict. The Volksbund acted on behalf of the German government – and slowly evolved from an organization with a great number of nationalist members to an association that worked toward reconciliation.

As difficult as it is to count the people who died, went missing or were wounded in the First World War, it is similarly difficult to give the number of German war cemeteries. Their number continues to change to this day – not least because of the reburials that occurred in France and Belgium up through the 1980s and that started in Eastern and South Eastern Europe in the 1990s. Another factor that makes it even more difficult to get an overview is that in several cemeteries fallen soldiers from different nations are buried. Even during the war, the soldiers did not bury their dead strictly according to nationalities. Numerous war graves that were granted protection as permanent resting places (in 1922 in Germany, as early as 1915 in the countries of the Allied Forces) are located in municipal cemeteries.

According to current figures, 768,000 fallen German soldiers are buried in 192 sites in France, 461,000 in single graves and 294,000 in communal graves. The largest cemetery on French territory – with around 44,800 bodies – is Neuville-St.-Vaast. However, there are also cemeteries where German soldiers are buried in Great Britain (2,406 fallen German soldiers), Ireland (six), Turkey (505), Ukraine, Slovenia, and in Sweden, which was neutral at the time. They died in prisoner of war or internment camps, in plane or airship crashes, or on ships or submarines.

Since the 1990s, the Federal Republic of Germany has signed treaties with many Eastern European states that permit the maintenance of war cemeteries. During such work, many graves from the period of the First World War have been rediscovered. So far, there is no comprehensive overview of all German war cemeteries and cemeteries in which German soldiers who died in the First World War are buried. The location and number of war graves by country can be established with the help of the manuals published by the German War Graves Commission. As the work in some East European states has not yet been completed, the number of sites could still increase.

It can be noted, however, that, in the interwar years the conservative and nationalist German War Graves Commission created uniquely designed sites for all war cemeteries in collaboration with authorities in the Foreign Ministry and the Ministry of the Interior and with the help of donations from the public. In many cases, the surrounding landscape and vegetation set the tone for the designs. During the interwar years, some sites (e.g. Langemark) were purposefully exploited in order to idealize the greatness of the victims and their readiness to sacrifice themselves, to prepare a new war, and to deny the military defeat. Nowadays, the German War Graves Commission is committed to cultural diplomacy and peace building. 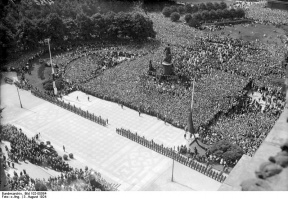