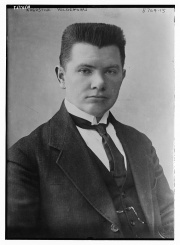 During the First World War, as professor at the University of Perm (Russia), Augustinas Voldemaras actively participated in the activities of Lithuanian exiles in Russia. In 1917 he argued for Lithuanian independence. On 11 November, 1918 he headed the first government of independent Lithuania. Subsequently he played a prominent part in Lithuania’s foreign policy.

Early years and academic career in St. Petersburg and Perm↑

Augustinas Voldemaras (1883-1942) was born into a peasant family in Dysna, in the county of Švenčionys, in the Russian Empire. In 1899 he graduated from the local school. From 1900 he lived in the capital of the Russian empire where he studied at the University of St. Petersburg. In 1910 he graduated from the Faculty of History and Philology with a Master’s degree. In 1914-1915 he briefly studied in Italy and Sweden. After returning to Russia in 1916 he moved to the University of Perm as professor of Roman history and ancient Greek, Latin and English languages. In 1916 he became a member of the Party of National Progress, a party with a nationalist outlook, conservative in social and economic questions.

The beginning of political activities in 1917↑

After the February 1917 revolution Voldemaras became involved in politics. He played an active part in the first conference of Russia’s Lithuanians held in Petrograd (St. Petersburg) between 25 May and 3 June. He helped to pass the resolution demanding Lithuanian independence. The conference elected him as Lithuania’s representative to the conference of Russia’s nationalities in Kiev in September 1917. Voldemaras raised the Lithuanian question during the conference, and made contacts with Ukrainians. Later on he became the Lithuanian liaison officer to the Ukrainian Central Council (Rada). In March 1918 the Ukrainians invited him to take part in the Brest-Litovsk peace talks between Germany and Russia as an adviser to the Ukrainian delegation. He formally participated in the peace talks as a professor of Perm University and an expert in Russian history.

Statesman of the Independent Lithuanian Republic 1918-1920↑

On 16 February 1918 Lithuania formally declared independence, but its territory remained occupied by German troops until the end of the First World War. Voldemaras returned to Lithuania and became involved in the political life of the new Republic. In the summer 1918 he was co-opted onto the State Council of Lithuania in Vilnius. The Presidium of Council asked him to form the first government, which came into being on 11 November 1918. He was elected Prime Minister and Minister of Foreign Affairs. Voldemaras argued for Lithuania’s international neutrality and as Prime Minister hesitated to organise Lithuanian military forces. In December 1918 he headed Lithuania’s delegation at the Paris Peace Conference. In his absence from Lithuania, Bolsheviks rushed into the territory of the Republic. In February 1919 the Lithuanian army fought the Red Army for the first time, and by the autumn all Soviet troops had been expelled from Lithuania. The administration of Lithuania formed several new cabinets with Voldemaras as Minister of Foreign Affairs, but the post of Prime Minister was held by other Lithuanian politicians.

On the margins of Lithuanian politics↑

Until the first democratically elected Constituent Assembly commenced work in June 1920, the government changed hands five times in Lithuania. Voldemaras served as Minister of Foreign Affairs in these Cabinets. During the period of Lithuanian parliamentarianism in 1920-1926 he had to withdraw from official politics. Like other prominent leaders of Lithuanian national revival he adopted a sceptical attitude towards parliamentary systems of government, and had a conservative attitude towards social reforms, especially land reform. He failed to be elected to the first three Lithuanian Diets. Voldemaras subsequently returned to academic and journalistic work. He became a lecturer at the University of Lithuania in Kaunas and then Dean of its Social Sciences faculty. Besides his academic and administrative work in the university, he gave public lectures and wrote in the press on political and social matters. He edited the nationalist newspaper “The Voice of Fatherland” and sharply criticized the government’s domestic and foreign policy. Therefore, in 1923, he was sanctioned and exiled to the provinces for a year.

In 1926, Voldemaras and two other members of National Progress party, which in 1924 was reorganized into Lithuanian Nationalist Union, were elected to the Third Lithuanian Diet. But he and his party colleague, the first President of Lithuania, Antanas Smetona (1874-1944) were passive observers of Lithuanian parliamentary work.

On 17 December 1926 a group of young Lithuanian army officers overthrew the left wing Lithuanian government. The leaders of the Nationalist Union had some credibility amongst the army. Smetona was appointed as the President of Lithuania for a second time and Voldemaras became the Prime Minister and Minister of Foreign affairs. The fourteenth Lithuanian Government headed by Nationalists worked until autumn 1929. Voldemaras was most active in foreign affairs. In 1927 he visited Rome, where he negotiated and signed the Lithuanian Concordat with Vatican. Later he met with Poland’s Marshal Józef Piłsudski (1867-1935) in Geneva to ease Lithuanian-Polish diplomatic tensions, but the meeting was fruitless. In January 1928 he signed an agreement with Germany legitimizing state borders. In 1929 he concluded trade agreement with Italy.

On May 1929 leftist students tried to assassinate Prime Minister Voldemaras. Later in September, 1929 President Smetona used his influence in the army and government and dismissed Voldemaras from the Prime Minister’s post on the grounds that he had ambitions to become the first person in Lithuanian politics. Voldemaras refused to resign and was banished to political exile in Lithuanian province. After his dismissal Voldemaras had no opportunity to return to politics. In 1934 his supporters in the army unsuccessfully tried to organize a state coup in an attempt to restore him to power. After being imprisoned he was offered an amnesty in 1938 but was forced into exile in France.

Voldemaras’ final attempt to return to Lithuania and to power followed the Soviet occupation in June 1940. Soviet officials arrested him at the frontier and deported him to Ordzhonikidze in the Caucasus. In 1942 as German military forces approached the area, Voldemaras was transferred to Butyrka prison in Moscow where he died on 16 December 1942.