Structurally the UdN comprised the Paris executive, a committee in the USA, and a network of subsidiary committees and corresponding delegates throughout Europe. The Paris executive committee was headed by centre-left French politician, Paul Painlevé (1863-1933), with well-known pacifist Emile Arnaud (1864-1921) and left-wing radical Paul Meunier (1871-1922) as its vice-presidents. In addition the committee included nine other members, among them the historian Charles Seignobos (1854-1942) and Madame Pauline Ménard-Dorian (1870–1941). More than fifty prominent figures in different European countries were listed as patrons. Among the U.S. patrons were Theodore Roosevelt (1858-1919), Andrew Carnegie (1835-1919), Woodrow Wilson (1856-1924), and Nicholas Butler (1862-1947), although they had no real connection with the organization. The only operating unit was the Paris committee whose work was organized by general secretary Pélissier and administrator Gabrys, with president and vice-presidents as figureheads. The work of the UdN was financially supported by the Lithuanian community in the USA and probably by the intelligence services of rival belligerents during the First World War.

The purposes of the Union des Nationalités were ambitious: to collect various kinds of material to reveal (as was said) the "soul" of each nationality, its past and future possibilities. Other aims included supporting nationalities in mutual understanding and solidarity, and in seeking to improve their conditions; promoting scientific enterprises, and organising congresses for the study of international questions; creating an international palace or museum in Paris. The committee produced a periodical, Les Annales des Nationalités as well as several studies on the situation of different national groups.

In principle the Union des Nationalités had a global reach. For example, it had contacts with non-European protest movements against British rule in India and Egypt. However, de facto it concentrated on Central and Eastern Europe, especially on the European parts of the Russian empire. Its narrow focus reflected the fact that one of the leading figures, Lithuanian Gabrys, concentrated on national Lithuanian and Ukrainian matters. Both nations were under the rule of Russian empire and their national claims contradicted the national aspirations of the Poles, explaining why Poland was not represented in the UdN.

The Union des Nationalités organized five congresses. In 1912 and 1915 they were held in Paris, and in 1916 in Lausanne. The congresses in 1918 and 1919 were poorly organized and sparsely supported. The difficulties became apparent after the outbreak of the First World War. During the second congress held in Paris on 26-27 June 1915 representatives of Serbs, Bulgarians, Czechs, Lithuanians, Latvians, Romanians, Armenians, and Ukrainians, attended, but participating members articulated geopolitical aims at odds with those pursued by the Union's French leadership whom they regarded as the spokesmen of an oppressive state. Moreover Gabrys changed his position, now arguing that the best hope for Lithuanian independence lay in seeking German help against Russia. Gabrys' pro-German orientation resulted in the Union des Nationalités' move from France to Lausanne in neutral Switzerland where he could make contacts with German representatives. In June 1916 the third congress of the Union was held in Lausanne. The main topic in the congress was the liberation of the non-Russian people of the Russian Empire.

After the Russian revolution in March 1917, Gabrys changed his position once more and took an anti-German stance because of German oppression in occupied Lithuania. He undertook the organization other congresses with the aim of expressing loyalty to France and the Entente, but the work of the organization was by now hopelessly confused and fatally compromised. 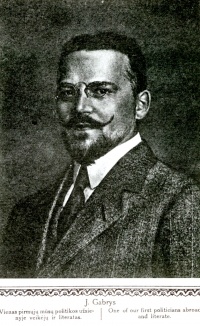 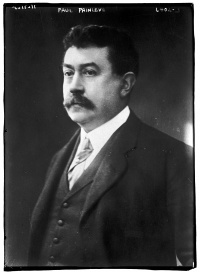