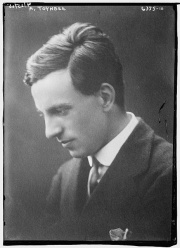 During World War I, Arnold J. Toynbee, as a member of the Political Intelligence Department, was charged with preparing analyses on the Middle East for the Paris Peace Conference. The global war was pivotal for the elaboration of his philosophy of history, considered a significant antecedent of current global history.

Arnold Joseph Toynbee (1889-1975) is best known as a historian and philosopher of history, and is one of the founders of the historiographical trend of global history. Nevertheless, for a great part of his long life he also worked as a specialist on international affairs, work he began during the First World War. A member of the London upper class, Toynbee attended the prestigious Balliol College, Oxford, where, in 1912, he became a tutor in ancient history.

In May 1915, he was recruited by the recently instituted British propaganda agency, known as Wellington House. As the person responsible for propaganda operations aimed at the United States of America, in the autumn of 1915 Toynbee was invited by Lord James Bryce (1838-1922) to address the British Parliamentary Blue Book on the Armenian Genocide.

Toynbee continued to be fully involved in propaganda activity, which, from 1916, was progressively integrated into the Foreign Office and, in 1918, formalized as the Political Intelligence Department (PID). The PID was coordinated by Sir William Tyrrell (1866-1947) and James Headlam-Morley (1863-1929). Although it lasted just two years, the PID was an extremely interesting experiment in recruiting professional historians as political advisers. Besides propaganda aims, the PID indeed engaged in intelligence activity, so the main task of its members was to draw up memoranda related to the political situation of certain countries.

Within the new department, Toynbee acted as the expert for the Ottoman Empire, due to his work on the Armenian Genocide. So, when PID members were charged with preparing memoranda for the British delegates prior to the Paris Peace Conference, Toynbee was assigned to the section devoted to the “Middle East”, comprising Turkey and the Asian provinces of the Ottoman Empire. Therefore, it was his task to draw up analyses and maps for one of the most significant scenes for British (and European) expansionist aims.

Along with the other experts, Toynbee took part in the Paris Peace Conference, which was aimed at shaping post-war geopolitics. In his analyses, stored among the Foreign Office papers in London, he focussed on the aspiration to national self-determination expressed by the Muslim world. The desire for political independence was considered unavoidable both as regards Turkey, whose people were judged ready for a national sovereign state, and for the two areas destined to become British mandates, Mesopotamia (later Iraq) and Palestine. In the latter case, Toynbee argued the pivotal role firstly of the wider movement of Arab nationalism and, later, of the more territorially based national ambitions. The central point of his analyses was the importance of the Muslim “awakening”, represented by the rise of nationalist movements throughout the Muslim world, from Egypt, to the Arab provinces of the Ottoman Empire, to the Indian subcontinent.

Within Toynbee’s historical-philosophical system, this awakening fitted into the wider reaction against the West by the other four living civilizations, namely the Islamic, the Byzantine, the Hindu and the Far Eastern ones. Recognizing the centrality of Islamic society for the world balance (and, especially, for the British Empire), Toynbee recommended avoiding a dangerous “clash of civilizations”. The realization of Muslim political claims was considered the only way to get a “modus vivendi” between West and Islam.

However, at the peace conference political logic prevailed over these specialist analyses, which drew upon substantial research and were inspired by the ideal of a new world order. The British experts’ disappointment at the conference’s decisions resulted in the institution, in July 1920, of the British (later Royal) Institute of International Affairs in London, which was to become an important think tank aimed at the scientific study of international politics. Toynbee, as director of studies at the institute between 1925 and 1955, continued, for many years, to play a central role as a political adviser. This was particularly the case during World War II, when he headed the Foreign Research and Press Service, which was incorporated into the Foreign Office. In the post-war years, at the apex of his fame, his influence on British foreign policy was remarkable.

Working as a political analyst during the First World War was pivotal for the development of Toynbee’s conceptual system. The immediate post-war years (1919-1921) were, as William McNeill (1917-2016) states, those in which the intellectual set up the basic categories of “civilization” and “contacts of civilizations”, which would be the core of his major work, A Study of History, in twelve volumes, the first of which was published in 1934. In his several studies, Teodoro Tagliaferri has demonstrated how the main categories of Toynbee’s philosophy of history were first applied to the analysis of international politics.

Due to the strong nexus between Toynbee’s two intellectual enterprises, the study of international geopolitics provided an empirical root to the elaboration of his conceptual apparatus. Toynbee’s categories are thus less rigid and abstract than the ones employed by contemporaneous theories on the “clash of civilizations”. Toynbee’s civilizations were not closed units, isolated in their culturally and religiously specific identity. On the contrary, identifying the reasons for conflict in political and socio-economic divisions, Toynbee saw intercultural dialogue as a means of sharing values and socio-political patterns, enabling peaceful participation in a “wider society”.

Furthermore, his very idea of history, conceivable as a history of civilizations instead of nation-states, rose from an awareness of the growing centrality of the scales and processes of globalization, which the war significantly accelerated, and, within this global frame, of the interactions and exchanges between different civilizations. In this twofold consciousness lie the elements of Toynbee’s historiography closest to current “global history”.

To be sure, he remained far from recognizing the agency of non-Western societies, as is now emphasized by global historians. His perspective continued to be basically Eurocentric - the common ground imagined for the civilizations’ pacific coexistence was made up of Western values – and Imperial, as his proposals for the Middle East were aimed at supporting the British hegemony in the area. Nevertheless, the First World War provided him with a new awareness of the importance of non-Western civilizations, as it clearly demonstrated that the West was no longer the exclusive protagonist playing on the global scene. He continued to devote great attention to these issues even in his last works, until his death in October 1975.