Tomb of the Unknown Soldier, Warsaw

The first memorial in Poland to honour the Unknown Soldier was unveiled on 2 November 1925. It was integrated into the arcades connecting the south and north wings of the Saxon Palace in Warsaw. The middle arcades comprised the centre of the mausoleum. The unidentified remains of a soldier who had fallen in the Polish-Ukrainian War (1918/1919) were buried with a silver wreath, the foundation charter of the monument, and fourteen vessels, each of which contained soil from one of the battlegrounds where Polish combat units had fought during the wars in the eastern borderlands (1918–1921). The foundation charter declared that the nation and the government, along with the clergy, the army, and institutions of self-government rendered “homage to the thousands of heroes who in the course of 130 years of struggle for freedom had fallen on the Field of Honour for the nation’s cause.”[1] The wrought-iron fences between the three middle arcades bore national and military insignia signifying the military tradition of the nation which had fought for independence. The fence behind the head of the tomb showed the national emblem, the eagle with the crown. To the right and left were displayed the Cross of Valor (Krzyż Walecznych) and the Cross of Virtuti Militari, the highest Polish military award for bravery, both of which honoured the Unknown Soldier. The memorial slab was inscribed: “Here lies a Polish Soldier who fell for the Fatherland”. Four granite plates mounted on the pillars near the grave bore the names of the villages and towns near which Polish combat units had fought on the Eastern and Western fronts (1914–1918) and during the wars in the borderlands (1918–1921).

The memorial was embedded in the national tradition of commemoration for warriors who had fallen while fighting for the country’s independence. During the First World War the Polish nation had not been a belligerent, but it had experienced war, forced migration, an economic crisis and occupation. Additionally, Russia, Germany and Austria-Hungary had forced Poles to serve in their armies. In Poland the war was widely interpreted as the climax of Polish martyrdom. At the end of the war, the nation achieved an independent state and frontiers in the west and east which largely corresponded with the expectations of most political groups. The eastern territories were incorporated into the newly founded Polish state after the military victories over Ukraine and Soviet Russia in 1919-1920. The idea of constructing a memorial to the Polish soldiers who had lost their lives arose following news of the entombment of the Unknown Soldier in Unknown Soldier Tomb in Paris and London on 11 November 1920. In June 1921 a Committee for Honoring the Fallen 1914-1920 was founded in Warsaw. Preparations were accelerated after 2 December 1924 when a then unknown group (the Federation of Polish Associations of the Republic, as it turned out four years later) laid down a memorial slab before the equestrian statue of Józef Poniatowski (1763–1813), dedicating it to the “Unknown Soldier who fell for the Fatherland”.[2] The act was enthusiastically welcomed by the public. The Cabinet Council commissioned the artist Stanisław Ostrowski (1879–1947) who was to create the memorial and decided, according to the wishes of the public, that the memorial would be erected in the Saxon Square. The plan was connected with the reconstruction of the Square, which had previously served as a parade-ground and a site of memory to the Russian rulers. In 1841 the Russian authorities had built an obelisk to commemorate seven Polish officers who during the uprising in 1830 had been killed by insurgents because they had not been willing to join the uprising. In 1894 a Russian-Orthodox church was built on the same site and dedicated to Alexander Nevsky (1220–1263), a prominent Russian national hero. Now in independent Poland the Saxon Square was given a new purpose: triumph and celebration of independence. During the 1920s, the church was pulled down, and in front of the Saxon Square the statue of Józef Poniatowski was erected, commemorating the general who had fallen in battle against Russia after having repeatedly fought against the tsarist armies. During the Second Polish Republic the Polish military held parades at the Saxon Square, and the public also demonstrated there.

The battleground, from which the Unknown Soldier was taken, was chosen by lot. Fifteen sites of battles from the wars against the Ukraine and Soviet Russia (1918–1919 and 1919–1921) were considered, since the territory belonged to the Second Polish Republic, the battles taken place there had been honorable and involved numerous victims. The unidentified body of a soldier was exhumed from the battleground near Lwów (Lviv). He had evidently served as a volunteer and was killed while fighting against the Ukrainian units. The soil in the fourteen vessels was drawn from the remaining sites.

The list with the battles engraved on the commemorative plaques was compiled by the Historical Bureau in the Ministry of Military Affairs. Two plates commemorated significant battles during the wars 1918–1921 in the eastern borderlands, which, in addition to the Silesian Uprisings (1919–1921), were regarded as wars of independence. The Silesian Uprisings were mentioned on one of the other two plates with the battles from 1914–1918.

The Unknown Soldier, being anonymous, was capable of being invested with various meanings. His cult was influenced by the republican culture of commemorating the war dead and honoring all fallen soldiers who had served the nation regardless of rank. In independent Poland, commemoration of the Unknown Soldier focused on soldiers who had died for the nation’s freedom. It glorified soldiers’ sacrifices and legitimized the nation’s independence. The commemorative act was connected with remembrance of the political resistance which had been supported by the civilians. The monument testified to continuity with the uprising tradition and was intended to signify national solidarity and Poland’s self-definition as a warrior nation.

The tomb was largely destroyed in December 1944 when the German demolition squads bombed Warsaw. It was reconstructed after the war. The rebuilt memorial made no mention of the Polish battles against the Bolsheviks, the Red Army, or Ukraine. Six new commemorative plaques were mounted. They commemorated the Polish combat against the German occupying armies in Poland and other countries during World War II and the participation in the Spanish Civil War (1936–1938). Four urns were filled with soil from twenty-four battlegrounds where Polish soldiers had fallen during the Second World War and added to the memorial.

After 1989, the message and meaning of the memorial has been transformed once more. The authorities of the Third Polish Republic had eighteen new commemorative plaques set up. Those from 1925 have been replicated. Thus the present monument commemorates all soldiers who in battles from 972 up to 1945 died for the country’s independence, and those who had been imprisoned or killed because of their national-political activity. To this day it remains Poland’s premier site for national and state celebrations. 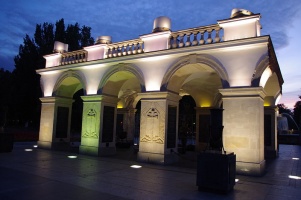