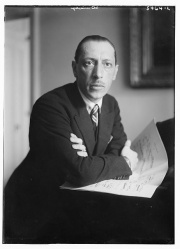 Having gained success throughout Europe with his compositions for the Ballets Russes (centered in Paris), Russian-born Igor Stravinsky took refuge from World War I in Switzerland from 1914 to 1920. Here, adjusting to the constrained circumstances, he began to write scores for reduced instrumentation. The ensuing aesthetics of condensed radicalism culminated in L’Histoire du soldat (1918) – a quite up-to-date fairy-tale play.

Igor Stravinsky (1882-1971), the third son of Fyodor Stravinsky (1843-1902), principal bass at the Mariinsky Theatre in St. Petersburg, was a student of the famous Russian composer and music theorist Nikolai Rimsky-Korsakov (1844-1908). In 1910, Stravinsky left St. Petersburg to work on a project of international importance; the director of the Ballets Russes, Sergei Diaghilev (1872-1929), had commissioned him to compose the ballet L’Oiseau de feu. The Parisian world premiere was successful and was followed by successful premiers of Pétrouchka (staged throughout Europe in 1910-11) and Le Sacre du printemps (1912-13). (Although the latter ballet was planned as “Pictures from Pagan Russia” with historical and ethnological correctness as early as 1910, some authors suggest an aesthetic anticipating the horrors of World War I).

Shuttling between France, Russia, and Switzerland, Stravinsky chose the village of Clarens in Montreux for the family home in 1914, and from 1915 lived in Morges near Lausanne in the francophone part of Switzerland, a safe exile-like haven during the war. He was exempted from Russian service; his brother Gury Stravinsky (1884-1917) died at the front in 1917.

Cut off both from his financial resources in Russia and from all chances to have his grand, elaborate works produced, Stravinsky faced significant financial problems that increased after the Russian Revolution. Still, trips to Paris and travels to Spain and Italy were possible. In 1917 he met Pablo Picasso (1881-1973) in both Rome and Naples. He managed to get his German nanny from St. Petersburg, who had taught him German and whom he loved like a mother, out of war-torn Germany and into Switzerland, where she died in Morges in 1917.

Even before the war, Stravinsky had planned to reduce the hypertrophied aesthetics of pre-war compositions. Moreover, circumstances forced him to score for smaller instrumentation suitable to the available production conditions; Les noces (1914-23) and Renard (1914-15) deserve special mention.

The friendship of the Swiss conductor Ernest Ansermet (1883-1969) is of importance to music history, not least because he brought back a collection of ragtime dances for Stravinsky from the USA. The stylised adaptations from these but also from many other different genres of popular music in this phase were outshone by the technical virtuosity of composition in the Ragtime of L’histoire du soldat (1918), the Ragtime for 11 instruments (1918), and Piano Rag Music (1919). His use of the techniques of Verfremdung (alienation), so influential in the theatre of Bertolt Brecht (1898-1956), culminated in the cooperation with the poet Charles-Ferdinand Ramuz (1878-1947). L’Histoire du soldat puts an orchestra of only seven on stage as part of the scene; the rhythmically enunciating narrator is simultaneously the commentator in this adaptation of the fairy-tale of the soldier, the princess, and the ultimately triumphant devil and has the first percussion solo in music history. The soldier exchanges his violin (i.e. soul) for a book predicting future stock prices (especially in the arms industry); his rise to riches and the triumph of evil are reflections of the times.

Between 1920 and 1939, Stravinsky lived in France, though he left Europe before the outbreak of the Second World War. Having moved to Los Angeles in 1940, he became a citizen of the USA in 1945. Stravinsky died in New York in 1971. He is buried in Venice.