From 1916 to 1918 the “Tirailleurs Somalis” were the only military unit from the Horn of Africa to operate on the Western Front, distinguishing itself at Verdun and in the Chemin des Dames offensive. The allies were concerned that the strong sympathies of the Ethiopian Crown Prince Lïj Iyasu toward the Central Powers could favour an alliance with Muḥammad ‘Abd Allāh Ḥassān.

On the eve of the First World War, the territories populated by the Somalis were nominally controlled by France (Côte Française des Somalis), Great Britain (Somaliland and the Northern Frontier District), Italy (Banaadir and the Sultanate of Hobyo and Majeerteen), and Ethiopia (Ogaden). However, in most cases European control was limited to the coastal strip, a situation that the war exacerbated because of the significant reduction of European civilian and military personnel in the region.

From 1899, Muḥammad ‘Abd Allāh Ḥassān (1856-1920), also known as “the Sayyid” (leader of the Ṣāliḥiyya brotherhood), and his followers, the Daraawiish (Dervishes), put up staunch resistance against the British and Italian presence in the northern area of the country. The complex religious factors that motivated Muḥammad ‘Abd Allāh Ḥassān’s jihad seemed to escape British observers, who depicted him as a religious fanatic, a cruel despot, and a robber. The epithet “Mad Mullah” was extensively used in colonial literature to belittle the Sayyid and his followers.

After almost a decade of harsh anti-colonial struggle, the Sayyid’s activism had created difficult tensions even within Somali society, where his followers targeted members of the Qādiriyya brotherhood and British and Italian protected groups. Furthermore, Muḥammad ‘Abd Allāh Ḥassān’s religious legitimacy suffered a severe blow in 1909 when, from Mecca, the founder of the Ṣāliḥiyya brotherhood, Sayyid Muḥammad Ṣāliḥ (?-1917), disavowed him as his deputy for northern Somalia. Although the Sayyid was still popular within the country, these developments prevented Somali polities from presenting a united and cohesive front against the colonial powers. Just before World War I, the situation in Somalia saw the colonial powers still confined to the coast at the same time as the threat posed by the Sayyid was contained in the northern part of the country.

Labour, Soldiers, and the Prospect of an anti-Entente Alliance↑

In 1915, over 200 Somali workers were sent by France to the Dardanelles Strait, where for three months they assisted the Entente expeditionary force. In the summer of 1916, French authorities in Djibouti assembled a battalion of “Tirailleurs Somalis”, who fought on the Western Front until October 1918 as part of the Régiment d’Infanterie colonial du Maroc (RICM). During the conflict about 2,400 men, largely from British Somaliland, served in this unit. In France, the Somali battalion took part in some of the bloodiest battles of the war: Verdun, where it participated in the reconquest of the fort of Douaumont (October 1916) and, later, on the Chemin des Dames (April 1917). At the end of the war the Tirailleurs Somalis had suffered a total loss of 490 men.[1]

Meanwhile, the situation in the Somali territories remained tense until the end of 1916. As in other parts of Africa, the proclamation of jihad in Somalia on 12 November 1914 also caused much concern and nervousness among the colonial powers, who worried that Muslims in the Horn of Africa would heed this call, putting regional stability at risk. As early as the first months of the conflict, the intensification of Turkish and German propaganda was reported by Entente powers, partly linked to the activity of the Ottoman consul general in Ethiopia, Aḥmad Maẓhar Bey (1870-75?-1920), who tried to foster a rapprochement between Ottomans, Ethiopians, and Muḥammad ‘Abd Allāh Ḥassān. The plan, though complex, could count on seemingly favourable wartime conditions. The Ottoman victories in Gallipoli, Mesopotamia, and Yemen (July 1915), where the British had been defeated at Lahij, and throughout the war, remained cornered in Aden, created the illusion of an imminent Turkish-German victory.

Between late 1915 and early 1916, two Ethiopian imperial missions visited the Sayyid, bringing weapons and ammunition.[2] In June 1916, Ottoman documents were intercepted by Italian intelligence, in which the Somali people were urged to rise up, and the Sayyid was officially recognized as Amīr of the Somali. ‘Alī Sa‘īd pasha, commander of Lahij’s Ottoman troops, sent Muḥammad ‘Alī to the Sayyid as a political and military adviser, while Lïj Iyasu (1897-1935) sent German armourer Emil Kersch (?-1917) to the Sayyid’s camp.

At the beginning of 1916, tensions also seemed to intensify in the southern territories of Somalia. On 2 February 1916, the Aulihan Somali of Great Britain’s East Africa Protectorate sacked the Serenli Fort, killing most of the soldiers and their commander, Lieutenant Francis Elliott (1881-1916): the colonial nightmare of a generalized insurrection from the north to the south of Somalia seemed to take shape. The British were forced to evacuate the region and retreat to the coast. They were only able to reoccupy the position in September 1917.[3]

Contribution to the War Effort↑

To assess the consequences of the First World War on Somali territories, the economic dimension must also be taken into account. The regional situation began to change in June 1916, with the news of the revolt in Mecca led by Sharīf Ḥusayn Ibn῾ Alī (ca. 1853–1931). The onset of the Arab revolt dashed the hopes of any Ottoman military support for the operations in the Horn of Africa. In September 1916, the head of the Ethiopian Orthodox Täwaḥədo Church deposed Lïj Iyasu, depriving the Sayyid of a crucial ally and forcing him to limit his range of action exclusively to eastern Somaliland, where he held out until November 1920.

In 1917, when the danger of a generalized revolt seemed averted, Italian colonies were asked to support the war effort by supplying food and raw materials. In Somalia, attention turned mainly to Banaadir, the region with the greatest agricultural resources. According to official Italian sources, in 1917 from Somalia 10,000 tonnes of dura [sorghum vulgare] were exported to Italy to be used experimentally as fodder seed and horse feed. In 1918, 1,000 tonnes of dura were exported to Eritrea to alleviate the food shortage which then prevailed in the country.[4] A commodity heavily in demand comprised pelts, used in the army for girths, harnesses, and footwear. Somalia exported about 1,600 tonnes of them to Aden, Zanzibar, Italy, and the United States. However, the full implementation of this plan was limited by the lack of transports to Eritrea and Italy.

At the beginning of the war, colonial control over the Somali region was mostly limited to the coastal area. Moreover, starting in 1899, Muḥammad 'Abd Allāh Ḥassān’s resistance further reduced the areas under European influence. During the war years, two phases can clearly be identified: in the first, until September 1916, the risk of Muḥammad 'Abd Allāh Ḥassān allying himself with Lïj Iyasu of Ethiopia aroused the greatest concern among the allies. Nevertheless, the French authorities in the Côte Française des Somalis were able to recruit 200 Somali workers for the Dardanelles and about 2,400 soldiers for the Western Front. The second phase, which began in 1917, was characterized by Somalia’s involvement in Italy’s war effort and the extraction of foodstuffs and raw materials exported to Eritrea and Italy.

A closer look at the impact of the First World War on Somali territories confirms that no areas of the world were spared the direct or indirect effects of the conflict. 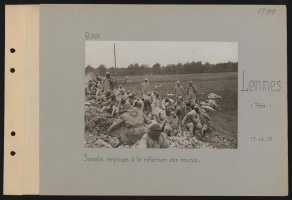 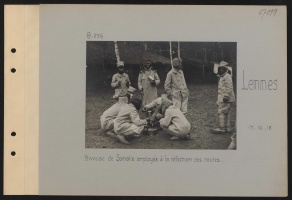 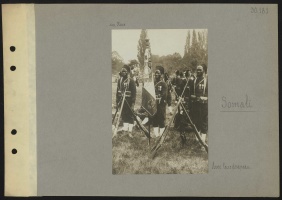 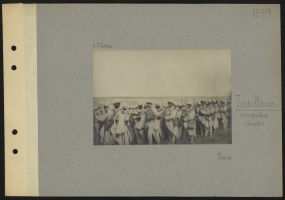