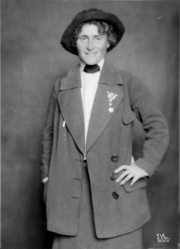 This article deals with the activities of journalist and photographer Alice Schalek as war correspondent during the Great War. Between 1915 and 1917 Schalek reported from the South Tyrolean, Isonzo and Eastern fronts. She published her reports in newspapers, books and lectures. While the tendency to idealize the war in her reports was in no way stronger than in those of her male colleagues, she was fiercely criticized by publicists as well as politicians during the war.

Alice Schalek (1874-1956) was an Austrian journalist, photographer, writer and travelling speaker. She grew up in a middle-class liberal Jewish family in Vienna and attended the Wiener Frauenerwerbsverein’s (Viennese association promoting women’s work) secondary school for girls (Lyzeum). Her first literary works, mostly novelettes and novels, date from 1902. From 1905 on, Schalek travelled extensively. She published travel features, mainly for the newspaper Neue Freie Presse, as well as books. She also held a series of lectures.

Schalek was a committee member of the renowned Verein der Schriftstellerinnen und Künstlerinnen in Wien (Association for Authors and Artists in Vienna) as well as member of other women’s associations before the war.

The outbreak of war in 1914 was a severe restriction to Schalek’s activities as a travel writer. She worked for Schwarz-Gelbes Kreuz, a charitable organization providing meals for hungry children. During this time, Schalek published next to nothing in newspapers. In spring 1915, she worked hard to get accredited as a war correspondent by the Kriegspressequartier (KPQ; War Press Office). Getting this chance at all has to be assessed in the context of solidified fronts and the KPQ’s desire to expand the military discourse in the media.

Being a woman and a civilian, Schalek would provide a broader perspective in her reports and eventually elicit a growing interest on the home front during the war. Her first mission was at the alpine front in South Tyrol. In her war reports, Schalek adhered to the characteristics of her travel feuilletons. In trying to give meaning to war, describing it for instance as a force for modernization, she was hardly different from her male colleagues. Karl Kraus (1874-1936) criticized her in October 1915 for the first time in Fackel; the fact that Schalek was a woman was crucial to his attacks. In March 1916, Schalek travelled to the Isonzo Front. From the photographs taken there she compiled a slide show for an extensive illustrated lecture that she held in over twenty cities. In February 1917, Schalek received a decoration (Goldenes Verdienstkreuz mit der Krone) for her media coverage. The success of her Isonzo lectures called critics into action. By the end of 1916, a group of Christian social parliamentarians requested her dismissal as war correspondent. Since her mentor, KPQ chief Maximilian von Hoen (1867-1940), had left the KPQ in the spring of 1916, Schalek lacked support in the upper ranks of the KPQ. By the end of August 1917, Schalek quit her job as war correspondent.

Schalek continued her activities as a travel writer after the war. In the 1920s, she was among the founders of branches of the women’s clubs Soroptimist and Business and Professional Women.

After the Anschluss (the German annexation of Austria in 1938), Schalek stayed in Austria and was arrested by Gestapo. Thanks to the PEN-Club’s intervention, she was able to leave Vienna in August 1939 and emigrated to the USA, but was not able to gain a foothold professionally. She died on 6 November 1956 in New York City.