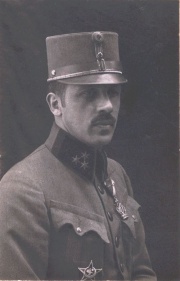 Camillo Ruggera was an officer of the General Staff in the Austro-Hungarian army. Assigned to the Supreme Command, on 29 October 1918 he was commissioned to make contact with the leaders of the Italian army to begin armistice negotiations. In the following days he was involved in preparing the Armistice of Villa Giusti, signed on 3 November 1918.

The life of Camillo Ruggera (1885-1947) is characterized by two legends. According to the first, the officer’s family descended from a tailor whose surname was Roger, a French army deserter who settled in Segonzano, Trento in the late 18th century. The second seems to be of more recent origin and attributes a minor role to Ruggera in the failed assassination attempt on Adolf Hitler (1889-1945) of 20 July 1944. Today, the latter appears to be a clumsy attempt at retrospective rehabilitation, considering Ruggera’s early and steadfast commitment to the Austrian National Socialist German Workers’ Party (NSDAP). In fact, both legends are entirely without foundation: his family’s history in Segonzano goes back to at least the 17th century, while there is no documentary evidence, at the present state of research, of even a late opposition to the Nazi regime. On the contrary, there are elements suggesting a firm adherence to Hitler.

The son of a police guard commander, Camillo Ruggera attended the German school of Trento in 1900 and then enrolled in the infantry cadet school in Innsbruck. Four years later he was discharged with an excellent rating and the rank of Officer-Cadet (Kadettoffiziersstellvertreter). He served in the 3rd Tyrolean Light Infantry Regiment (Tiroler Kaiserjäger), stationed in Trento until he was admitted to the War College (Kriegsschule) in October 1909 to become a member of the General Staff. He successfully completed his studies and became a staff officer in the 94th Infantry Brigade in 1912. On the order of general mobilization he was assigned for short periods to the command of the General Staff of the 94th Infantry Division, the 5th Army Corps (at the time of the Battle of Lublin), the 66th Infantry Brigade and, with the rank of captain, the 94th Infantry Brigade. In September 1915 he was transferred to the 12th Mountain Brigade and rapidly deployed to the Carnia front. He then took part in the spring 1916 offensive on the plateau of Folgaria and Lavarone, as well as in military operations on the plateau of the Seven Municipalities (Sieben Gemeinden). In November of the same year he was transferred to the Command of the XX Army Corps and finally, in April 1917, to the Supreme Command (Armeeoberkommando). As a member of the Supreme Command he took part in the planning of the 12th Battle of the Isonzo and, in particular, the Piave offensive of June 1918. On 29 October 1918, on behalf of the Supreme Command, Ruggera reached the Italian lines on the heights of Serravalle in southern Trentino to deliver a statement for the Command of the Italian XXIX Army Corps signed by General Viktor Weber von Webenau (1861-1932). The statement announced the acceptance of conditions imposed by U.S. President Woodrow Wilson (1856-1924) for a separate peace with Austria-Hungary and the formation of a committee to begin armistice negotiations. He temporarily left the negotiations with the Italian Supreme Command and returned to General Weber and his entourage, which consisted of Colonel Karl Schneller (1878-1942) and Lieutenant Colonel Viktor von Seiller (1880-1969). On 31 October Ruggera joined the commission (by then working at the Villa Giusti on the outskirts of Padua) for the settlement and signing of the armistice. This eventually took place at 6:00 p.m. on 3 November. However, the role of the captain was marginal during the unfolding of the negotiations: together with Colonel Schneller and Lieutenant Commander Johannes von Liechtenstein (1873-1959), he had been commissioned as the officer in contact with the Austro-Hungarian Supreme Command, but beyond this, according to the testimony of Giovanni Battista Trener (1877-1954), an Italian member of the armistice commission, he “never opened his mouth.”

Although his family was from Trentino, at the end of the conflict Camillo Ruggera chose to continue his military career in the Austrian army, serving in the following years as advisor to the Ministry of the Army (Staatsamt für Heerwesen) from 1918-1922 and from 1928-1929 to the Federal Ministry of the Army (Bundesministerium für Heereswesen). He also served as chief of staff of the 1st (1922-1928) and the 3rd Infantry Brigade (1929-1932) and was finally assigned to the war archive from March 1932 to May 1933. During this period he collaborated in the drafting of the work Österreichs-Ungarns letzter Krieg (Austria-Hungary’s Last War) under the direction of Edmund Glaise von Horstenau (1882-1946). It was not the first time that Ruggera had devoted himself to the role of publicist, since at that time he had already contributed articles (mostly of a technical nature but with extensive references to his experiences in the First World War) to the magazine Militärwissenschaftliche und Technische Mitteilungen.

His steadfast commitment to the Austrian NSDAP, which he joined in April 1933, was the cause of his early retirement (“I was dismissed in 1933 for not joining the sinister manoeuvres of the Dollfuss-Schuschigg system”, he wrote some years later)[1] and later took prominent positions in the party militias, which in the meantime had been declared illegal. He also secretly dealt with recruiting officers from the Austrian army for the Sturmabteilungen (SA) of the NSDAP. After the Anschluss he was readmitted into the army with the rank of Major General, initially finding employment in the Federal Ministry of Defence and in the Muff commission. Here he was charged with evaluating applications for the German army submitted by Austrian officers. Later, he was assigned to the Luftwaffe and placed in command of the Luftgau II stationed in Posen in September 1939 (he kept this post until February 1941), where he attained the rank of General of Anti-Aircraft Artillery. He died of a heart attack in 1947. 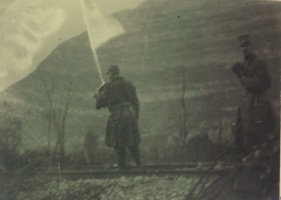