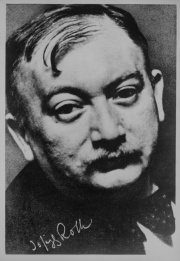 Joseph Roth was a Jewish writer and journalist. His experiences at the Eastern Front in Galicia in 1916–1917 and the demise of the Austro-Hungarian Monarchy after the war had a lasting impact on his fiction and intellectual outlook.

Joseph Roth (1894-1939) was born in Brody, at the easternmost edge of the Austro-Hungarian Empire, in 1894. He grew up fatherless in the house of his mother and grandparents. He attended the German Gymnasium and in 1913 moved to Vienna to study German literature and philosophy. The war interrupted his studies, and in 1916 he enlisted in the army. Most likely Roth never experienced battle, but was stationed at a press encampment in East Galicia. After the war he returned to Vienna, where he worked for Der Neue Tag until it folded. In June 1920 he arrived in Berlin, where he quickly became the star journalist of Die Frankfurter Zeitung. In 1922 he married Friederike Reichler (1900–1940) whose descent into schizophrenia was the great tragedy of his life. After the war he published his first novels in rapid succession; besides thousands of pages of journalism and short stories, Roth wrote sixteen novels in the two short decades of his career. In 1925, sensing the dangers of rising fascism, Roth went to Paris, where his itinerant life began. Living in hotels and reporting from Poland and Russia, Roth finally left Berlin for the last time in January 1933. Lasting fame came with Hiob: Roman eines einfachen Mannes (Job: The Story of a Simple Man, 1930) and Radetzkymarsch (The Radetzky March, 1932). From the mid-1930s onwards his life spiraled down into a stream of financial worries aggravated by alcoholism. He died, age forty-four, from the effects of delirium tremens in a hospital for the poor in Paris in 1939. He is buried at the Cimetière Thiais.

In 1932 Joseph Roth wrote: “My strongest experience was the war and the collapse of my fatherland, the only one I ever had: the Austro-Hungarian Monarchy.”[1] The irony is that Roth’s “homeland” came into existence at the precise moment of its collapse, and this fact had a lasting influence on his fictional portrayal of life in post-war Europe. His early novels – Das Spinnennetz (The Spider’s Web, 1923), Hotel Savoy (Hotel Savoy, 1924), and Die Rebellion (Rebellion, 1924) – form a trilogy that sets the terms for Roth’s emerging dystopian imagination. In these novels, not the war itself but the world that rose from its ashes is mourned. Drenched with nostalgia and post-catastrophic notions of history, these modernist texts are premised on the experience of loss. His characters are caught in a perpetual state of non-belonging; while they long for the past, they acknowledge that the world prior to World War I is forever lost. In the essay Juden auf Wanderschaft (The Wandering Jews, 1927), Roth idealized the traditional Jewish world he encountered at the front as a critique of Jewish assimilation in the West. In The Radetzky March, his portrayal of three generations of the Trotta family analysed the demise of Austro-Hungary from within. While direct engagement with World War I lessened in the years that followed, he returned to it in Die Kapuzinergruft (The Emperor’s Tomb, 1938). Faced with the pending catastrophe of Nazi Germany, Roth championed monarchism as a solution to the interwar crisis, knowing fully, however, that this option belonged to a lost world. 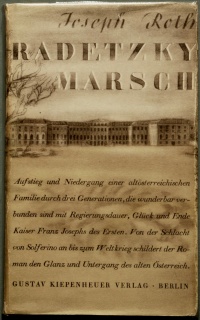