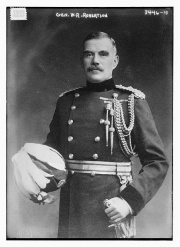 William Robert Robertson was the first British soldier to advance from private to field marshal. During the Great War, he initially served as the British Expeditionary Force’s quartermaster-general before becoming its Chief of staff in January 1915. In December 1915, he became the government’s designated military adviser as chief of the Imperial General Staff, holding that position until February 1918 when he was forced out, primarily because of his unyielding support of Sir Douglas Haig in concentrating British forces in the killing fields of France and Belgium.

Friction between William Robert Robertson (1860-1933) and the civilian leadership arose over the former’s support of Douglas Haig’s (1861-1928) view that British operations in the Mediterranean must be subordinated to defeating the Empire’s most important strategical rival, Germany, on the Western Front. Robertson’s first success as Chief of the Imperial General Staff (CIGS) was to liquidate the Dardanelles venture and persuade the civilian leadership to end Lord Horatio Herbert Kitchener’s (1850-1916) “limited liability” approach on the Western Front with a powerful offensive on the Somme. British casualties on the Western Front numbered 522,206 prior to the Somme and 2,183,930 thereafter. Robertson also played a pivotal role in getting the government to embrace conscription. On the other hand, appalled at British losses (57,470) on the first day of the Somme, Robertson corresponded secretly with Haig’s chief of general staff, making it clear that he favored a more cautious approach than Haig who sought a quick breakthrough and distant advance.

David Lloyd George (1863-1945), who served as the secretary of state for war before becoming prime minister, was frequently at odds with Robertson over higher strategy. Horrified by the enormous British casualties on the Western Front, he favored campaigns elsewhere, in Palestine, Italy or even the Balkans. After delay and much consternation, however, Robertson persuaded the war cabinet that Britain must maintain pressure on the Western Front, especially after the French failed to deliver the promised knock-out blow against the Germans during the so-called Nivelle Offensive on the Aisne in April 1917.

Haig continued his attacks at Passchendaele into November as British casualties mounted and morale plummeted. The German army also suffered heavy casualties and was never the same again, but Robertson’s continued support of Haig (despite his own private concerns) lowered his standing with the British civilian leadership, especially after a successful British campaign in the outer theaters led to the conquest of Jerusalem in December 1917.

Lloyd George sought to undermine Robertson’s position as the war cabinet’s official adviser on strategy by suggesting an extraordinary war council that included Sir Henry Wilson (1864-1922), destined to be Robertson’s successor, and Sir John French (1852-1925), the former commander of the British Expeditionary Force. This meeting never took place, but Wilson and French were asked to submit appreciations and (following the rout of the Italians at Caporetto) it served as the inspiration for the creation of an inter-Allied war council with its own general staff which included Sir Henry Wilson, an obvious attempt to undermine Robertson’s authority as CIGS. After much wrangling over the CIGS’ relationship with the resulting executive war board’s machinery, Lloyd George succeeded in out-maneuvering Robertson who could not count on Haig’s support on this issue. On 18 February 1918, the war cabinet announced that Robertson had accepted the leadership of the eastern command, one of the seven “commands” of the army in Great Britain. The new executive war board, tasked with the control of a general reserve, never truly functioned. Following the armistice Robertson took command of the British army of the Rhine and in 1920 was promoted to field marshal.