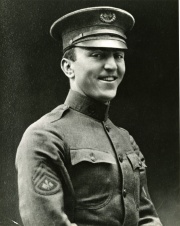 Eddie Rickenbacker’s (1890-1973) parents emigrated from Switzerland. At a young age, Rickenbacker had an interest in mechanical devices. When he was fourteen years old, his father died after sustaining a head injury in a workplace altercation. After this tragedy, Rickenbacker dropped out of school and sought work. After trying several manufacturing jobs, Rickenbacker took a position at a local garage performing minor automobile repairs. He gained additional knowledge of mechanical engineering through a correspondence course and received valuable hands-on experience after Lee Frayer (1874-1938) hired him as a shop assistant for the Oscar Lear Automobile Company. Frayer led the company’s racing team and made Rickenbacker his riding mechanic for the 1906 Vanderbilt race, giving him his first exposure to the thrills of high-speed racing. When Frayer transferred to the Columbus Buggy Company he brought Rickenbacker with him as chief testing engineer, and there Rickenbacker came in contact with representatives of the Firestone Tire & Rubber Company. The two companies co-sponsored a racing team and Rickenbacker quickly became an active member. He split driving duties with Frayer during the 1911 Indy 500 and took over as primary driver the next year. As his performance and mechanical skills improved, he became a popular and successful motorsports star in the years before America entered the war.

On the recommendation of the American Automobile Association, Rickenbacker became a chauffeur to General John J. Pershing (1860-1948) and enlisted as a sergeant in the army. While in Europe he drove for Colonel William Mitchell (1879-1936), a member of Pershing’s aviation staff who would become a strong advocate for an independent air force after the war. Mitchell approved Rickenbacker’s request for pilot training and after its successful completion, Rickenbacker became a chief engineer in the Air Service. He received additional combat training despite a hole in his cornea (a fact that he kept secret) and joined the 94th Pursuit “Hat in the Ring” Squadron as a combat pilot.

Flying a French-made Nieuport 28 biplane, Rickenbacker first saw action along the St. Mihiel salient. On Saturday, 27 April 1918, he scored his first victory when he received dual credit for shooting down a German Pfalz D-III, and he was promoted to flight commander in May. By June, he had officially become an ace with five verified victories. Reoccurring ear pain grounded Rickenbacker for most of July and August. While he convalesced from several medical procedures, casualty reports from the 94th caused him to reflect on recent wartime experiences. He came to view the reckless quest for glory prevalent in most combat pilots as dangerous and foolish, and resolved that in the future he would only engage the enemy when he discerned a reasonable chance of survival. This marked the end of the devil-may-care race car driver and the birth of Rickenbacker as a seasoned combat pilot. Such prudence paid off, and Rickenbacker was promoted to commanding officer of the 94th two weeks after his return to combat duty. Flying French Spad S.XIIIs, Rickenbacker and the rest of the 94th joined over 1,400 aircraft under Mitchell’s command in the St. Mihiel Offensive from 12-16 September. After achieving success in this first independent American operation of the war, the 94th continued to support American troops during the Meuse-Argonne Offensive, which culminated in the armistice of 11 November 1918. By the war’s end, Rickenbacker had received credit for twenty-six total victories, securing his title as America’s “ace of aces.”

After the war, Rickenbacker published Fighting the Flying Circus with the help of a ghostwriter and went on a war bond tour for the government. Business ventures into automobile production and airmail carriage proved unsuccessful. He joined the Fokker Aircraft Company and then American Airways before becoming first vice president and then general manager of Eastern Airlines, a General Motors subsidiary. Rickenbacker received the Congressional Medal of Honor in 1930. As a civilian during World War II, he undertook a whirlwind tour of Army Air Force bases to raise troop morale. While on a mission for the War Department, Rickenbacker’s B-17 ran out of fuel in the Pacific Ocean southwest of Hawaii after it overshot a Pan-America Airways airfield on Canton Island. Rickenbacker and six of the seven crew members survived for twenty-one days on a meager diet of fish and rainwater before being rescued. During the Cold War, he became a fervent opponent of communism. Rickenbacker became chairman of the board and CEO of Eastern Airlines in 1953 and retired in 1963. 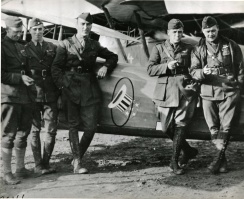