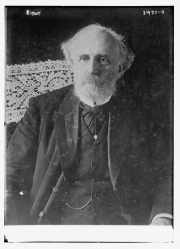 Alexandre Ribot belonged to the French political elite for more than forty years. During the war, he was finance minister from 1914 to 1917 and prime minister (Président du Conseil) from March to September 1917.

As a deputy, senator, minister and prime minister (Président du Conseil) Alexandre Ribot (1842-1923) belonged to France’s parliamentary elite for more than forty years. Ribot, born in Saint-Omer in Northern France and trained as a lawyer, was a firm but conservative republican, attached to order and laissez-faire economics, and equally opposed to republican radicalism and socialism as to monarchism and clericalism. He was elected deputy for the first time in 1878 in the aftermath of the constitutional crisis of 1877 and soon built a reputation as an expert in budgetary and financial questions. His career reached its first climax in the 1890s, when, as foreign minister and later prime minister, he was instrumental in bringing to life the Franco-Russian military alliance. Obsessed by the “German menace”, Ribot was willing to accept the international risks of this alliance in exchange for security and a break-up of France’s diplomatic isolation. When, in 1899, radicals and socialists formed a new parliamentary coalition to end the Dreyfus Affair, Ribot went into opposition; during the years of the “radical republic” following the affair, he stayed away from power, acting more and more as an elder statesman.

When war came in 1914, Ribot became part of the union sacrée governments, first as justice minister, then as finance minister. Until 1917, Ribot belonged to the inner circle of France’s decision-makers and was committed to maintaining some sort of political control over the military. In order to finance the war effort, Ribot relied on national war bonds (bons de la défense nationale) and loans on the international capital market, trying to avoid war taxes, especially the implementation of the progressive income tax favoured by left-wing radicals or socialists. In the short term, this strategy was quite efficient, but in the long term it proved to be a heavy burden for the French economy. When Aristide Briand’s (1862-1932) government fell during the military and political crisis of spring 1917, Ribot was promoted to prime minister, where he continued the work of his predecessors and tried to preserve the union sacrée. During his time in office he had to deal with the consequences of the inglorious “Nivelle Offensive”, the subsequent mutinies in the French army and the political and diplomatic repercussions of the February Revolution in Russia. Ribot was unable to control the tensions inside the coalition between “nationalists” (proponents of war until victory and far-reaching war aims) and “pacifists” (proponents of diplomatic consultations to end the war), and he had to resign when the union sacrée finally split in September 1917. His refusal to allow socialists to attend the Stockholm conference of the Socialist International had made him lose the support of radicals and socialists and paved the way – after the interlude of the short-lived government under Paul Painlevé (1863-1933), in which he served as foreign minister – for Georges Clemenceau’s (1841-1929) rise to power.

After the fall of the Painlevé cabinet, Ribot, now aged 75, retired to private life. Though he kept his senatorial seat, he no longer played an active role in French politics and died in 1923.