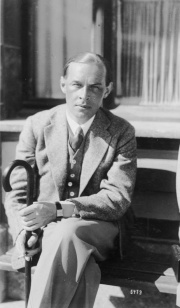 Erich Maria Remarque was a German writer and pacifist who became world-famous for his anti-war novel Im Westen nichts Neues (All Quiet on the Western Front) (1928).

Erich Maria Remarque (1898-1970) was born to a working-class family in Osnabrück, Germany. In November 1916 he was drafted, and after military training at Osnabrück and Celle he was sent to the Western Front in June 1916, where he served in an entrenchment unit at the Somme and in Flanders. On 31 July 1917 Remarque was severely wounded near Houthulst, Flanders, and sent to a military hospital in Duisburg, where he stayed until the armistice. After the war Remarque worked as an elementary school teacher and then after 1921 as a journalist in Hannover and Berlin.

His anti-war novel Im Westen nichts Neues (All Quiet on the Western Front), first published in 1928, became an international success and provoked a controversial discussion on the representation and interpretation of World War I in Germany. The subsequent banning of the movie All Quiet on the Western Front (USA 1930), directed by Lewis Milestone (1895-1980) in December 1930 as a consequence of National Socialist protests forced Remarque to go into exile in Switzerland in 1931.

In May 1933 Remarque’s books were burnt by the National Socialists, and in 1938 he lost his German citizenship. Remarque remained in exile, living in Switzerland, France, and the U.S., where he became a U.S. citizen in 1947. He returned to Europe in 1948, and lived in Switzerland, New York and Italy until his death.

In the novels, short stories, plays, and film scripts he wrote after Im Westen nichts Neues, Remarque focused on the fate of ordinary people in times of war, persecution and inhumanity. His immense international success and reputation was shaped by his strong commitment to pacifism and humanism. 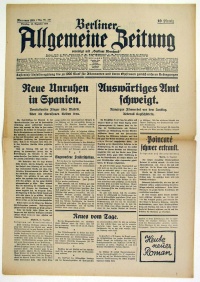