The Great War helped to ease the Church-state tensions that had shaped French politics and society during the preceding generation. However, the very different context of the French colonial empire prevented a similar reconciliation overseas. This article shows how in French Indochina, the onset of war exacerbated the dearth of resources and political insecurity that threatened both the colonial and missionary enterprises and produced new conflicts between the two parties. Their reconciliation after the war would have more to do with Vietnamese Catholic campaigns for an independent Church, which both colonial officials and missionaries opposed, than with the Great War itself.

When the Great War broke out in August 1914 there were about 400 French missionaries active in France’s colony of Indochina. Virtually all of them belonged to the Société des Missions Etrangères de Paris (SMEP), a missionary order active in Asia since the 17th century.[1] During the generation before the outbreak of the Great War, the secular French Third Republic rose out of the ashes of Napoleon III, Emperor of the French’s (1808-1873) Second Empire. It was a regime that placed two principal goals at the heart of its program for French national renewal: the secularization of public life through the formal separation of Church and State and the broad expansion of France’s colonial empire.[2] By 1914, a powerful French colonial bureaucracy in Indochina controlled many aspects of political and economic life in a region of Asia where the SMEP had been active for hundreds of years.

The early years of French colonial rule in Indochina were a time of severe tensions between missionaries and colonial authorities. Missionaries and naval authorities (a notoriously conservative, pro-Catholic part of French society) had worked together quite effectively during the French conquest of Cochinchina during the 1860s and 1870s, a time when missionaries and their institutions played an important role in colonial governance. But beginning in the 1880s, the rise of an explicitly anti-Catholic French administration in Indochina led to a range of official efforts to reduce missionary influence in Indochinese society.[3] Even in the 1910s, French rule in Indochina and missionary conversion efforts were still tenuous enterprises, threatened by the widespread Vietnamese opposition to foreign rule and foreign religion. This had led to a modus vivendi of sorts, in which colonial officials and missionaries – still regularly at odds with one another – nevertheless managed to coexist. How did the outbreak of the Great War affect this hard-fought truce between the sacred and the secular in French colonial Indochina?

Consensus and Tension at the Outbreak of War↑

In the earliest days of the war, it seemed as if the so-called “Sacred Union” – the broad consensus in French politics and society to set aside confessional conflicts in the face of war – might also extend into the French empire. French missionaries were swept up in the enthusiasm of the war’s early days and the publications of missionary societies like the SMEP were filled with testimonials of missionaries willingly leaving their evangelizing efforts to join the front. This enthusiasm continued even as missionaries began to die in the trenches. In many cases, stories of missionary martyrs for the nation served to affirm Catholic patriotism after a generation during which the Church’s place in French society had come under intense scrutiny.[4]

The on-the-ground realities of Indochina, however, belie the claim that Church-state relations during the Great War were fundamentally similar within and outside of metropolitan France. Indeed, many missionaries in Indochina greeted the outbreak of war with more concern than enthusiasm. These concerns were rooted in several factors: to begin with, many of these missionaries had been in Indochina for a long time, in some cases since the 1880s. They were therefore not present to witness, and be affected by, the intense surge of nationalism that had grown during the months leading up to the war. In fact, the last memories of France that many of these missionaries had were of the intense anti-clericalism that had accompanied the rise of the Third Republic in the 1880s, manifested in the Ferry Laws on education and culminating in the separation of Church and state in France in 1905. These men had a very different experience of the coming of war to France and were less likely to be enthusiastic about the conflict.

A more primary concern, however, was that mobilization would devastate the hard-fought and fragile inroads these missionaries had made in achieving conversions and building a mission infrastructure. Catholic missions in Indochina had experienced intense repression from the ruling Nguyễn dynasty during the era of the French conquest. Beginning with anti-Catholic edicts under the Minh Mạng, King of Vietnam (1791-1841) in the late 1830s, missionaries experienced severe limits on their ability to seek conversions or found institutions like schools and seminaries. During the worst moments of tension between Catholics and the Nguyễn dynasty – notably after the French conquest of lower Cochinchina (southern Vietnam) in 1862, an aborted invasion of Tonkin (northern Vietnam) in 1873-1874 and the Sino-French war of 1882-1885 that led to the French protectorate of Vietnam – widespread sectarian violence had resulted in the deaths of dozens of missionaries and as many as 100,000 Vietnamese Catholics.[5] For missionaries, the French conquest brought a degree of freedom that Catholic missionaries in Indochina had not experienced for decades, if ever. Relatively stable political conditions led to a greater flow of money into Indochina, which missionaries used to develop Church institutions, as well as the missions’ agricultural enterprises. But even in this freer field of activity, resistance to mission activity remained fierce. Indeed, a general aversion to Catholicism among many parts of the population, coupled with a reinforced belief in the link between Catholicism and French rule, continued to make conditions for mission expansion difficult. When the Great War broke out, missionaries thus believed that any significant withdrawal of their personnel would threaten the entire Catholic enterprise in Indochina.

The Great War and Church-State Conflict in Indochina↑

Resistance to mobilization was present among missionaries from the very beginning of the war. In August 1914, for example, a group of twelve missionaries headed for France left their ship in Hong Kong to request medical exemptions from the fighting.[6] Few took such active and visible steps, but many preemptively sought deferments that would allow them to remain in Indochina. Many strongly believed that they could best serve France by remaining in Indochina and attempting to extend French influence by conversion. Still, many colonial administrators, who handled missionary requests for deferments, did not see it in this way. French officials in Indochina had, by 1914, been embroiled in a longstanding tug-of war with missionaries over their respective reach in regions of Indochina where the colonial state was attempting to expand. For officials, missionary resistance to mobilization was not only generally unpatriotic; it was a direct form of resistance to the broader expansion of French secular authority in Indochina.[7]

The onset of war not only continued old battles between Church and state in Indochina, it also brought a slate of new challenges to longstanding tensions. For example, the war coincided with a series of terrible floods and epidemics in rural Vietnam. Missionaries witnessed this firsthand and appealed to the colonial state for help; however, the financial strictures imposed by the war effort reduced state support even further than usual. Missionaries resented this bitterly, especially at a time when the colonial state was actively campaigning for, perhaps even coercing, Vietnamese participation in the war effort.[8] Colonial officials reported several cases of missionaries trying to undermine state recruiting efforts in Catholic areas, which for colonial officials only reinforced their beliefs about missionary opposition to the war.[9] Missionary nationality was also a concern. Not all SMEP missionaries were French and colonial officials were so worried about a small number of them who were naturalized German citizens that they interned these missionaries until the end of the war.[10]

Another new and particularly intense source of tension between missionaries and colonial officials were the tens of thousands of Vietnamese recruited to work or fight in France.[11] It is unclear how many Catholics were among the Vietnamese who went to France. However, in light of the fact that a disproportionate number of recruits came from the central and northern regions of Vietnam (Indochina’s Catholic heartlands) and the likelihood that Catholics may have been more apt to volunteer, it is probable that roughly eight to ten thousand Vietnamese Catholics went to France during the course of the war. Many missionaries were at least partly excited that Vietnamese Catholics would have an opportunity to visit a center of world Catholicism and perhaps visit holy sites such as Lourdes.[12] But equal levels of apprehension accompanied their enthusiasm. Many missionaries were simply worried that their parishioners might lose their lives or that their absence would have terrible consequences for families dependent on their labor. Many missionaries also believed that Vietnamese Catholics, if removed from missionary supervision, would stray away from religion and towards temptation. Left-wing political activity, far freer in France than in Indochina, was a particular concern and missionaries especially resented that secular educational associations were given access to Vietnamese Catholic soldiers and workers, while missionaries were at times barred from accessing military sites. This was, to missionaries, especially galling given that French officials facilitated non-Catholic Vietnamese religious activity in these very same places. Indeed, French officials built several pagodas for Vietnamese Buddhists to worship. What colonial officials saw as a simple and obvious act of accommodation to Vietnam’s majority religion, missionaries saw as an active effort to turn Vietnamese Catholics away from the Church.[13]

The history of Church-state relations during the Great War suggests that the dynamic of the so-called “Sacred Union,” as partial and tense as it was at times in metropolitan France, is not a useful category of analysis to understand Church-state relations in the French colonial empire. Unlike in France, Catholicism was a minority religion in all parts of the empire; in some parts of the empire, local populations actively resented it. For missionaries, mobilization represented a threat to the future of the Church in a way largely absent from the thinking of Church authorities in France. For colonial officials, missionary opposition was a direct challenge in a competition for institutional influence between Church and state in Vietnam that, in France, had largely ended with the consolidation of the Third Republic in the late 19th century. However, for all the ways that Church-state tensions in French Indochina persisted during the Great War, the end of the conflict largely brought these tensions to a close. During the interwar years, the rise of a Vatican-led campaign to create independent national Churches throughout Asia and Africa, a process that drove religious nationalism among Catholics who by then strongly resented much about colonial rule, created common ground between French secular and religious authorities now both concerned about preserving European authority at a time when the blows to European prestige brought about by the Great War had brought this authority fatally into question.[14] 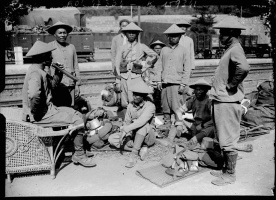 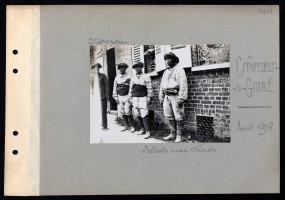