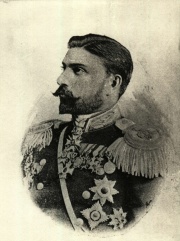 Infantry General Racho Petrov is a controversial figure in Bulgarian history. He served in four wars, was a long-standing chief of staff of the army, and twice prime minister of Bulgaria. During the First World War, he served as the head of the Macedonian Military Inspection Area, a zone under Bulgarian military rule. After the war, he was imprisoned on embezzlement and corruption charges related to this service.

Racho Stoianov Petrov (1861-1942) was born in Shumen, an old Ottoman garrison centre. In 1878, immediately after the emergence of the Bulgarian national state, he attended a military training course organized by the Russian occupation authorities in Plovdiv and enrolled in the newly established military school in Sofia. In 1880, he began his studies at the Russian Nicholas General Staff Academy.

He returned to Bulgaria in the autumn of 1883 and actively participated in the events surrounding the unification of Bulgaria with Eastern Rumelia and the so-called “Bulgarian Crisis”, in which Aleksandǔr I, Prince of Bulgaria (1857-1893) was dethroned under the influence of Russia. Petrov participated in the bloody quarrel with Russophile Bulgarian officers and supported Stefan Stambolov (1854-1895), who would become a powerful statesman in the next decade.

Petrov was considered a protégé and confidant of the monarch Ferdinand I, Tsar of Bulgaria (1861-1948). In the first years of his rule, Ferdinand received unmistakable evidence of the young officer’s loyalty: as head of the general staff, he worked to build up, modernize and strengthen the Bulgarian army; and later, as prime minister, he followed the line suggested to him by the palace.

Petrov was appointed minister of defence in the summer of 1887, and held the position again from 1894 to 1896. At the beginning of the 20th century, he twice served as Bulgarian prime minister, from January to February 1901 and from May 1903 to October 1906. In the period from 1900 to 1906, he was repeatedly appointed minister of the interior and minister of foreign affairs and religions.

Petrov was one of the first officers of the Bulgarian army after the country’s liberation from the Ottomans. During the Serbo-Bulgarian War of 1885, at the age of twenty-four, he became chief of staff of the army and an undeniable contributor to Bulgaria’s victory. After the end of the war, he was chief of the general staff and head of the military officers’ school in Sofia. Consecutively, but quickly, he climbed all the steps of the military hierarchy: In 1913, he was appointed general lieutenant, and in 1936, he acquired the highest Bulgarian military rank, infantry general.

Between 17 November 1915 and January 1917, Petrov was the head of the Macedonian Military Inspection Area, nine districts in Macedonia with an area of 33,500 square kilometres and a population of more than 1.25 million. These districts were under Bulgarian military rule between December 1915 and December 1918.[1] Petrov’s main efforts were aimed at improving the living conditions and the supply of the Bulgarian army. He committed to providing the population with food, issuing decrees for the regulation of the prices of certain food products and goods on his own initiative. He also established good relationships with the Germans and Austro-Hungarians.

Petrov was also associated with financial misappropriation and the illegal requisition of goods for personal use.[2] Evidence of this made its way to the Bulgarian government and to the army headquarters. Additionally, he came into conflict with a number of influential local Bulgarians, which threatened the national policy for the integration of the province into Bulgaria. Nevertheless, he retained his connections to Tsar Ferdinand I.[3] After September 1916, Petrov deliberately distanced himself from active participation in the administration of Macedonia. In January 1917, the Bulgarian military began investigating the actions of the general, and he was suspended from duty. In May 1917, he was relieved from office and left the army.

In 1919, the leader of the Bulgarian Agrarian People’s Union, Aleksandŭr Stamboliyski (1879-1923), proposed a law for prosecuting wartime ministers, and, subsequently, a law for prosecuting and punishing the supporters of Bulgarian involvement in the First World War. Petrov was arrested and charged in relation to his actions as head of the Macedonian Military Inspection Area. In 1920-1921, he was sentenced to seventeen years in prison and dispossessed of his civil and political rights. He had also to pay a large fine in compensation to the state. In 1924, after the military coup and overthrow of Stamboliyski’s government, he was granted amnesty. It was not until 1932 that his civil and political rights were restored.

In the 1930s, Petrov supported charitable work.[4] His biggest donation (half a million lev) was for the girls' high school in his hometown. He died in 1942 at the age of eighty-one.