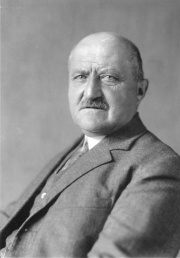 Georg Michaelis is usually portrayed as the politically failed chancellor of 1917. His resignation after fourteen weeks in office was the first overthrow of a Reich chancellor initiated by Reichstag political parties. Before he was appointed chancellor, Michaelis served in important administrative positions in Germany’s war food economy; afterwards he held office as the senior president of Pomerania.

Georg Michaelis (1857-1936) spent his formative years in Frankfurt an der Oder. He studied law in Breslau and Leipzig and also attended classes on national economy, which shaped his belief that the profit-driven market economy should both be limited by government interventions and inspired by Christian public spirit. He was a teacher of German law in Tokyo from 1885-1889, contributing to the modernisation of Japan’s judicial system. A successful administrator in several Prussian provinces he was finally appointed as the deputy finance minister of Prussia in 1909. He became increasingly devoted to Protestant Pietistic beliefs leading to various social welfare works.

Positions in the War Food Economy↑

Michaelis was in charge of assisting the creation of the War Grain Corporation. In November 1914, he became chairman of its supervisory board. He was also made imperial commissioner for bread cereals and flour in February 1915, which provided him with a seat in the powerful Imperial Distribution Centre making him the most influential figure of the bread administration. In July 1915, when the War Grain Corporation and Michaelis’ office as imperial commissioner were merged into the new Imperial Grain Office, he became chairman of its management committee.

In February 1915, Michaelis proposed an “Imperial War Office for the National Food Supply”. His idea was realised when the War Food Office was established in May 1916, but without the comprehensive powers Michaelis had wanted. Agrarian lobbyists also prevented his appointment to a leading position because they feared more government intervention into agriculture. The War Food Office was elevated to the Reich ministry in July 1917. In February 1917, Michaelis was made Prussian state commissioner for the national food supply, giving him extended executive powers.

Magnus Freiherr von Braun (1878-1972), chief press officer of the Reich interior ministry was presumably the first to propose Michaelis for German chancellor. On 12 July 1917 Braun, contacted the Third Supreme Command presenting Michaelis as a suitable successor to Theobald von Bethmann Hollweg (1856-1921). After discussions between leading militaries and high court officials, Wilhelm II, German Emperor (1859-1941) agreed although he did not know the candidate in person. It came as a big surprise when, on 14 July 1917, Michaelis was appointed German chancellor and Prussian minister president.

Michaelis failed to cooperate with Reichstag parties because he lacked trust in the power of parliament. He remained a convinced monarchist, attempting to strike a balance between military leadership, Kaiser and Reichstag parties. Despite Erich Ludendorff (1865-1937) retaining a strong political influence on him, Michaelis was supportive of Foreign Minister Richard von Kühlmann’s (1873-1948) attempts to moderate Germany’s war aims policy, and was also principally in favour of a negotiated peace. His dilatory reaction to the offer of Pope Benedict XV (1854-1922) to mediate peace became a highly controversial issue in the post-war period and was fuelled by ill-led accusations of Michaelis having prevented peace for denominational reasons. Michaelis’ intention to economically develop the Baltic States and to politically connect them to Germany, as well as his domestic economic-social reform plans remained illusory. After another confrontation with Reichstag parties, his final attempt to hold the office of Prussian minister president, while withdrawing from the office of German chancellor, was unsuccessful. On 1 November 1917, Michaelis was dismissed.

In 1918 and 1919, Michaelis served as senior president of Pomerania, initiating economic reforms and social welfare works, and contributing to the relatively smooth transition of power to revolutionary forces. In 1921, he published his apologetic autobiography. He engaged in Pietistic student works initiating small-scale economic and life reform projects in Berlin and in Brandenburg. When Adolf Hitler (1889-1945) came to power, Michaelis joined the National Socialist German Workers’ Party (NSDAP). He died of heart failure in his home near Berlin.