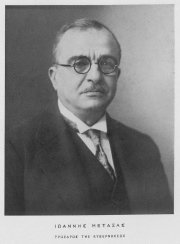 Ioannis Metaxas was a conservative army officer and politician, who influenced decision-making in Greece during World War I by collaborating with King Constantine I. In 1936 he became head of an oppressive dictatorial regime and in 1940 he was responsible for Greece’s entry into the Second World War.

Born on the island of Ithaca, Greece in 1871, Ioannis Metaxas (1871-1941) graduated from the Officers’ School in 1890. Even during the early years of his career he distinguished himself with his firm patriotism, as well as with his powerful personality. In 1897 he participated in the Greco-Turkish War, serving at the time as a member of the staff of Crown Prince Constantine, then heir to the Greek throne. From 1899 to 1903 Metaxas received higher military education in Germany; this experience is thought to have decisively influenced his character and his ideas. In the first decade of the 20th century he served in various key positions in the Greek army. In 1910 he was appointed chief adjutant to his future major political opponent, Eleutherios Venizelos (1864-1936), at the time the new Prime Minister and Minister of Military Affairs of Greece. Metaxas played a significant part in the Balkan Wars (1912-1913), mainly through his participation in negotiations that proved crucial for future events.

1914-17: Close consultant to King Constantine – The organization of "Epistratoi"↑

At the time of the outbreak of World War I, Metaxas was lieutenant colonel, assistant chief of the general staff, and one of the closest and most influential consultants to Constantine I, King of Greece (1868-1923). He supported Greek neutrality in the war, taking into consideration the strength of Germany. His ideas, in contrast to those of Prime Minister Venizelos, provoked rage not only among the supporters of the latter, but also among the diplomatic missions of Entente members in Athens. Tension reigned all over Greece and the country was divided between the Royalists and Venizelists.

Metaxas’ first serious disagreement with Venizelos came in the first months of 1915, when the Entente powers asked Greece to participate in the Dardanelles Campaign, promising territorial reward in Asia Minor. King Constantine initially approved the plan for Greek involvement proposed by Venizelos, but Metaxas, who strongly opposed it, resigned from his duties. He considered, as he later explained, the power of Greece to be insufficient for the dismantling of the Turkish rule in Asia Minor and so he disapproved of Greek military action in that territory. Under the influence of Metaxas the King retracted, thus provoking the resignation of Venizelos on 6 March 1915.

Metaxas also played an essential role in the organization of the groups of “Epistratoi” in Athens and all over Greece. “Epistratoi” were armed paramilitary groups, consisting of soldiers released by the official army in June 1916 as part of the overall demobilization of the Greek armed forces. They were strong supporters of Constantine’s policy. The “Epistratoi” used to terrorize their opponents and act violently, especially after October 1916, when Venizelos moved to Thessaloniki and formed the Provisional Government – a parallel “state” within the Greek state. This stance culminated in persecutions and massacres against Venizelists in the first two days of December 1916; armed conflicts took place between forces of the Entente allies, which had entered the Greek capital, and units of the national army reinforced by the “Epistratoi”. That series of events, known as “Noemvriana”, created an unbridgeable gap between the two sides and provoked, among other measures from the Entente allies, a naval blockade of Athens with terrible consequences for the population.

Dismissal from the army, self-exile and return to Greece↑

After the abdication of Constantine under pressure from the Allies, and the entrance of Greece into the war on the side of the Entente in June 1917, Metaxas was released from the army and sent into exile in Corsica. He was tried in absentia and sentenced to death in January 1920, but he did return to Greece after the defeat of Venizelos’ party in the general elections of November 1920.

Metaxas in politics – A harsh dictator who rejected the Italian ultimatum↑

In the years after the disastrous end of the Asia Minor Campaign in 1922, Metaxas worked as a politician, encountering consecutive electoral failures, but also enjoying some short spells of ministerial duties. On 13 April 1936 Metaxas was appointed Prime Minister by George II, King of Greece (1890-1947). Some months later, on 4 August 1936 he suspended the Parliament and began his rule as dictator. The Metaxas’ regime was particularly harsh against its opponents (mostly against the rising Communist movement). A systematic effort was made to give a clear ideological framework to this style of governance, following (but only to a certain extent) the model of similar totalitarian regimes blossoming at the same time in Europe. However, Metaxas’ rule is credited with the adequate military preparation of Greece in light of World War II. For all his previous controversial involvements, Metaxas is mentioned in Greek history mainly for his final act, the rejection of the ultimatum presented to him by the Italian government on 28 October 1940 and the subsequent entrance of Greece into World War II. He died three months later, on 29 January 1941.