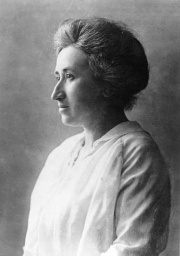 A Socialist and a vocal critic of the German Social Democratic Party’s (SPD) war policies, co-founder of the anti-war Spartacus League in 1916 and the Communist Party of Germany (KPD) in 1918, Rosa Luxemburg supported the German Revolution of 1918. In January 1919, she and her close comrade, Karl Liebknecht, were brutally murdered in Berlin by the Garde-Kavallerie-Schützen-Division under the command of Waldemar Pabst.

Rosa Luxemburg (1871-1919) is one of the most recognisable faces of the German revolution of November 1918. A highly controversial figure at the time of her death, she has since become a figure with widespread appeal, standing for positive values such as freedom, compassion, spontaneity and peace. Luxemburg’s legacy is often riddled with apparent contradictions: she is a major figure on the German left, although she disagreed fundamentally with many of the leading theorists. Feminists embrace her, although she distanced herself from the women’s emancipatory struggle conducted by her close friend Clara Zetkin (1857-1933), and pacifists hold her up as an example, although she rejected utopian dreams of peace and was prepared to accept the use of violence as the price of a socialist society.

Born in Zamość, Poland in March 1871 into a middle-class secular Jewish family, Luxemburg moved to Warsaw with her family at the age of 3. Her Jewishness coupled with her political activism made her an outsider in Poland and in 1889 she moved away to study in Zurich, Switzerland, completing her doctoral thesis on The Industrial Development of Poland in 1898. In Zurich she became part of a radical émigré community and met the Lithuanian activist Leo Jogiches (1867-1919), her partner for the next eight years. In 1893, Luxemburg and Jogiches co-founded the Social Democracy of the Kingdom of Poland (SDKP) as an internationally-oriented party, and Luxemburg edited and wrote for its journal Sprawa Robotnicza (Worker Matters), travelling between Zurich and Paris. In 1899, a marriage of convenience gave her German citizenship, and she arrived in Berlin determined to rise through the ranks of the SPD, then the world’s strongest Socialist party. By 1914, Luxemburg had become highly influential in left-wing SPD circles and from 1907 to 1914 taught in the Party School in Berlin. This was not without difficulty and opposition, and by 1910 Luxemburg’s conviction that revolution had to come from below had placed her in opposition to leading men such as Eduard Bernstein (1850-1932), August Bebel (1840-1913) and Karl Kautsky (1854-1938). Luxemburg’s emphasis was on the development of revolutionary consciousness through mass collective action in the form of strikes: although the Revolutionary Socialist Party could prepare the ground, once revolutionary activity had broken out, it did not have a clear script, nor could it be controlled from above.

A committed internationalist, Luxemburg opposed militarism and campaigned against war, which she saw as inextricably linked with nationalism, capitalist expansion and imperialism and completely against the interests of the working classes. In 1914, on the eve of the First World War, she was sentenced to a year’s imprisonment for exhorting German workers to refuse to fight future capitalist wars.

The outbreak of WWI shocked Luxemburg, and she saw the SPD’s support for the German government’s national war aims as a cowardly betrayal of international socialism. With close comrades, including Karl Liebknecht (1871-1919) and Clara Zetkin, she formed the anti-war International Group, later known as Spartacus, distributing an illicit newsletter (the Spartacus Letters) throughout the war. She also agitated directly, co-organising a huge anti-war rally attended by 10,000 people on 1 May 1916. Luxemburg spent most of the war years in prison, serving a sentence in the women’s prison in Berlin’s Barnimstrasse from February 1915 to February 1916. A much longer sentence following the May Day demonstration kept her incarcerated from July 1916 until 8 November 1918, just one day before the declaration of the Republic, when the revolution was already in full swing across Germany. While in prison in Berlin, Posen and Breslau, she carried on her activism through her writings, which remained implacably critical of SPD support for the government’s war aims rather than for workers’ growing anti-war protests. In 1917, the split within the SPD was made official with the formation of the Independent Social Democratic Party of Germany (USPD), with Spartacus as a left-wing fraction. In 1918, clashes with USPD leaders made a further split inevitable and in December 1918 the KPD was formed.

As editor of the revolutionary Die Rote Fahne (Red Flag), Luxemburg strongly condemned the SPD leaders, now in government, for their collaboration with and capitulation to counterrevolutionary forces. Believing that world revolution was in reach, Luxemburg set out in inflammatory tones an uncompromising programme of continued revolution until the tenets of socialism were finally realised. Luxemburg has been accused of a contradictory position in supporting peace while advocating bloody revolution and civil war: in fact her writings show that she was resigned to violence only because she knew that the powerful would never cede their privilege without a fight. By 1918, Luxemburg had developed a revolutionary theory that placed her in opposition to some leading thinkers, including Lenin himself, as outlined in The Russian Revolution, published posthumously in 1922.

Luxemburg was murdered in January 1919 in the aftermath of an armed insurrection that has remained controversial to this day – often described as the “Spartacist Uprising” although the Spartacist group had little role in directing events – and amidst press and political vilification that positioned Spartacus leaders as a major threat to German national security. On the night of 15-16 January 1919, first Liebknecht, then Luxemburg were taken from their hiding place in a western Berlin flat to the Eden hotel, where they were interrogated and eventually killed by officers of the Garde-Kavallerie-Schützen-Division (Guards Cavalry Division) under the command of Waldemar Pabst (1880-1970). Beaten with rifle butts and shot at close range, Luxemburg’s body was dumped in Berlin’s Landwehr canal, only resurfacing six months later. The murders were never credibly investigated – in fact the military division responsible for the murders also carried out the enquiry - and the SPD government took the view that the Spartacists had brought their fate upon themselves.

The brutality of Luxemburg’s violent death is central to her legacy, especially when considered alongside her personal letters, which when published in 1923 did much to revise public perceptions of her. The contrast between the sympathetic friend and nature-lover revealed by the letters, and her public image as “bloody Rosa” wedded to violence and class hatred are striking even today. Known as a great revolutionary, Luxemburg played no direct role in organising the outbreak of the German Revolution and was only able to participate in it for just over two months before her murder; moreover she did so as leader of a leftist group that enjoyed little popular support. In the German Democratic Republic after 1949, the ruling Socialist Unity Party (SED) appropriated the figure of Luxemburg in support of state socialism. However, her legacy through both her writing and lived example has provided and continues to provide inspiration to revolutionaries across the world in the 100 years since her death and nearly 150 since her birth. 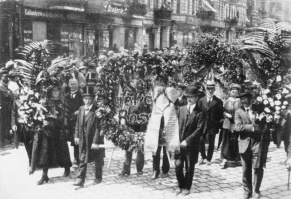 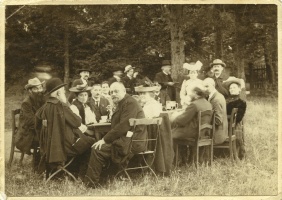