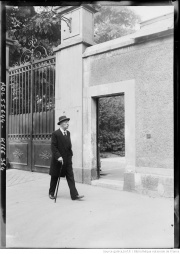 Considered one of the best generals in the French armed forces, Charles Lanzerac commanded the French Fifth Army during the Battle of the Frontiers. However, at the end of August 1914, he was replaced by General Franchet d’Espèrey because of his poor relationship with British Field Marshall John French and his opposition to General Joseph Joffre, who was commander-in-chief.

Charles Louis Marie Lanrezac (1852-1925) was born in Guadeloupe in 1852. He was a Saint-Cyr cadet, but had to leave the academy prematurely (due to the Franco-Prussian war) as a second lieutenant in August 1870. He graduated from the General Staff Course in 1879, and taught military skills and tactics in Saint-Cyr from 1880 to 1884. After a stay in Tunisia between 1886 and 1892, he was posted to the War College, and was a tactical instructor before becoming director of studies, and later of the College.

He was promoted to the rank of general in 1906, and distinguished himself from his peers by his nuanced positions on offensive doctrine. At the dawn of World War I, he was considered one of the most brilliant generals of his generation. Lanrezac was opposed to the principle of excessive offensive operations that tended to become the only maneuver possible among the officer corps.

Lanrezac expressed doubt about Plan XVII[1], pointing out the dangers that Germany’s new move through Belgium represented. The French general staff knew broadly of Germany’s plan (thanks to the informer known as the Avenger), but the French high command still preferred to conduct an offensive operation in eastern France, right in the heart of Germany’s presence. Owning to uncertainties surrounding the United Kingdom’s commitment and Belgium’s attitude, Plan XVII was adopted.

Nevertheless, after the declaration of war, he took command of the Fifth Army, leading combat at Charleroi and Guise. However, his opposition to the General Headquarters and his disagreement with Field Marshall John French (1852-1925) had a definite influence on his career. He was dismissed on 3 September 1914 and left active service in 1917. The reasons for his dismissal were diverse. First of all, he “misconstrued” orders from the Commander-in-chief at Charleroi (23 August) and Guise (29 August). Lanrezac then maintained strained relations with French, even though his army was supposed to liaise with the British Expeditionary Force. Lastly, General Joseph Joffre (1852-1931) decided to withdraw Lanrezac from the command of the Fifth Army because of his independent mind.

After the war, Lanrezac left his retirement and published Le Plan de Campagne Français et le Premier Mois de la Guerre (2 août-3 septembre 1914) in which he is clearly critical of Joffre. Before the war, Lanzerac had criticised the plan because, in his view, it failed to take into account the possibility of a major German assault in Belgium; the book reiterates and develops this thesis, insisting on the commanders’ failure to anticipate a German offensive in August 1914. However, shortly before his death, Lanrezac is said to have acknowledged that had he been in Joffre’s place, he would have acted in the same way. He died in Neuilly-sur-Seine in 1925. His remains were transferred to the Invalides in 1933.