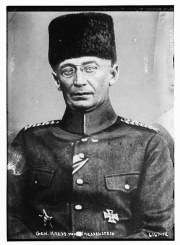 Kreß von Kressenstein was a Bavarian-German officer who, as member of the German military mission in the Ottoman Empire, led the offensives on the Suez Canal and the defense of Gaza. In June 1918, he left for Georgia as the head of the “German delegation in the Caucasus.”

Friedrich Freiherr Kreß von Kressenstein (1870–1948) descended from an old Nuremberg patrician family. His military career began in 1888 when he entered the 4th Bavarian Field Artillery Regiment “König”. After graduating from the war academy, he was deployed on several general staff assignments. In February 1914, he left with the German military mission under General Otto Liman von Sanders (1855-1929) for the Ottoman Empire and first served there as commander of the Ottoman field artillery school.

Upon the Ottoman Empire’s war entry, Kreß von Kressenstein was chief of staff of the VIII Ottoman Army corps in Damascus with the military rank of lieutenant colonel. In this role he organized the First Suez offensive, which aimed to close the Suez Canal and provoke an uprising in British-occupied Egypt. This operation, which took place at the end of January 1915 with the participation of approximately 20-25,000 men, failed due to the inexperienced troops, tactical errors and logistic failures. Thereafter, however, the British had to increasingly concentrate forces on the Suez Canal that, as a result, were unavailable for service in other theatres. After the offensive, Kreß von Kressenstein received the title “Commander of the desert”, which was connected with the authority of a Commanding General. In June 1915, he was recalled from the inhospitable Sinai desert in order to prepare a broader large-scale offensive by expanding infrastructure and strengthening troop drills. Beginning in December 1915, Kreß von Kressenstein was commander of the I Turkish Expeditionary Corps. As such, he advanced with his second offensive against the Suez Canal in mid-July, 1916, with about 16,000 men. After the British victory at Romani on 4 August, 1916, however, Kreß von Kressenstein had to retreat. After this failure, he solicited to be recalled from the Ottoman Empire but ultimately remained in Palestine at Cemal Pasha’s (1872-1922) insistence. In Palestine Kreß von Kressenstein took over the preparations for the anticipated English attack that was fought off in March 1917 in the First Gaza Battle. In April 1917, Kreß von Kressenstein, who had become Brigade General and Commander of the XXII Army Corps in the meantime, was able to beat back a second British attack on Gaza for which he was given the Prussian medal Pour le Mérite. In October 1917, he took over supreme command of the 8th Ottoman Army in Palestine. With far superior numbers of infantry, cavalry and artillery, the British initiated the Third Battle of Gaza on 31 October 1917 with which they ultimately seized control of Gaza on 7 November, and a month later succeeded in capturing Jerusalem. Kreß von Kressenstein was relieved of his command on 14 November 1917 by General Erich von Falkenhayn (1861-1922), Commander-in-Chief of Army Group F (Yildirim). In January 1918, he resigned from his Ottoman services completely.

Kreß von Kressenstein was considered likeable and was a good troop leader with his great intercultural empathy for Turks and Arabs. His adaptability to his given surroundings and his level-headed assessment of his Ottoman allies also led, however, to a conflict with Falkenhayn who lacked Middle East experience and who viewed Kreß von Kressenstein as weak and “vertürkt” (turkishized); this appreciation contributed to the decision to release him from his command after the defeat at the Third Battle of Gaza.

After his assignment on the West Front, Kreß von Kressenstein left for Georgia on 23 June 1918 as head of the “Deutsche Delegation im Kaukasus. His task was to stabilize the newly formed Democratic Republic of Georgia and to make the economic resources of the Caucasus available to Germany. The troops under his command supported the defence of Abkhazia against the invasion of the Red Army. An essential goal of this diplomatically challenging mission was to prevent the Turkish occupation of the Caucasus. The unilateral actions of the Turks and the German’s disapproving stance led to serious tensions among the allies in the summer of 1918, including some minor skirmishes. Kreß von Kressenstein, however, succeeded in averting serious conflict between German and Turkish troops in the Caucasus. Ultimately, the Turks created a fait accompli by capturing Baku, which Kreß von Kressenstein was unable to oppose. Together with Otto von Lossow (1868-1938), he championed the protection of the Armenian population in the Reich government because of the massive Turkish encroachments in the Caucasus. After the armistice, the bulk of German troops pulled out of the Caucasus in December 1918 while Kreß von Kressenstein was interned by the British from February to June 1919 on Prinkipo (Büyükada) Island in the Sea of Marmara.

After his return from internment, Kreß von Kressenstein contributed to the construction of the Ministry of the Reichswehr and led the Ordnance Department there until 1923. In March 1924, as Lieutenant-General he assumed command of the 7th (Bavarian) Division. Ultimately he was made a General of the Artillery and Commander-in-Chief of Gruppenkommando 2 before he retired in November 1929. Kreß von Kressenstein initiated the establishment of the veteran organisation “Bund der Asienkämpfer” in September 1919 and became its first chairman, before becoming honorary chairman in 1924. In 1938 his candidly written war memoirs With the Turks to the Suez Canal were published. Aside from numerous military-historical articles, he composed a memoir in the summer of 1942 about his mission in the Caucasus, which was passed onto the Bavarian War Archive, in which he criticized the contemporary eastern policy of the National Socialists. He died in Munich in 1948. 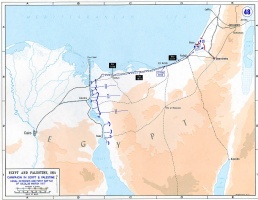 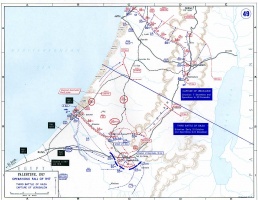