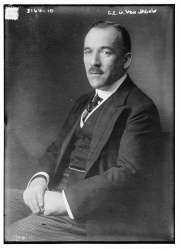 Gottlieb von Jagow was a German diplomat. He served as the German Foreign Secretary from January 1913 to November 1916.

Gottlieb von Jagow (1863-1935) was born into a distinguished noble family. His father, Carl von Jagow, was a feudal estate owner (Rittergutsbesitzer). He studied law at the Universities of Bonn and Berlin. After working some years with the Prussian administration he entered the diplomatic service in 1895 where he advanced swiftly. Due to his frail health Jagow spent most of his career in Italy. In 1907 he was appointed envoy extraordinary to Luxembourg, and ambassador to Rome in 1909.

Foreign Secretary: The July Crisis and the First World War↑

When the German Foreign Secretary Alfred von Kiderlen-Waechter (1852-1912) succumbed to a heart attack, Jagow considered himself inappropriate as successor. He accepted his appointment in January 1913 only reluctantly. He became a loyal follower of Chancellor Theobald von Bethmann Hollweg (1851-1921) who was inexperienced in foreign affairs. In July 1914 Jagow’s attempts to prevent Germany’s “encirclement” failed. In the early days of the “July crisis,” Jagow was away from Berlin on his honeymoon.

Jagow failed to assert his foreign policy agenda against imperial Germany’s many centres of power: the emperor and his entourage, the chancellor, the Supreme Army Command (Oberste Heeresleitung, or OHL), and the Reichstag. The lack of any success disillusioned him by the end of the summer of 1916. Paul Hindenburg (1847-1934) and Erich Ludendorff (1865-1937) perceived him as a wimp – not least because of his opposition to unrestricted submarine warfare. Jagow retired in November 1916 and was succeeded by Arthur Zimmermann (1864-1940).

James W. Gerard (1867-1951), United States ambassador to Germany from 1913 to 1917, described Jagow as a quiet, unassuming, and scholarly man. According to Johannes Hürter he was a representative of the old era who was overburdened with the First World War’s problems.

In 1917, Jagow served as head of a military hospital in Libau. Aside from publishing two books on the outbreak of war, Jagow did not emerge politically after his retirement. He died in 1935 in Potsdam.