During World War I, the idea of Switzerland as a peaceful island was created and propagated by many means, for example postcards. After the end of the war, this metaphor gained the status of a myth, when it was linked to the idea of self-chosen neutrality and military-based independence and placed within the country’s so-called humanitarian tradition. Historians integrated this myth into the dominant narrative about Switzerland in World War I, which obscured the huge commercial and services exchange as well as the overwhelming political dependency on foreign powers during the war.

A Myth of Swiss Historical Culture↑

In 2006, when a textbook entitled “Die Schweiz und die Zeit des Nationalsozialismus im Licht aktueller Fragen” (Switzerland and the National Socialist era in the light of current issues) was published in German-speaking Switzerland, the team of authors prefaced the chapter on the post-World War I years and World War II with the image of the Swiss parliament building standing on a massive rock, supported by retaining walls and surrounded by rough seas (see postcard).[1] This image refers to a powerful Swiss myth: the postcard from 1914 showed the dominant view of Switzerland’s position in the world in the 20th century. This image crystallised in World War I and has since remained present in mythical idealisation and as an object of political controversy.

The concept of a peaceful but armed island standing amidst the confusion of war is inseparably associated with Switzerland in World War I.[2] Over the course of the 19th century, transnational existences and a powerful exchange between the emerging nations across all areas were considered a matter of course; however, World War I altered the official representation of Switzerland. This concept of an island determined and shaped the hegemonic narrative, not only in contemporary historical culture and politics, but it is still used today in attempts to define Switzerland’s position in the world.[3]

In 1914, the Swiss government expected to have to forfeit neutrality if the war endured.[4] The image of a country that stayed detached and that was spared the upheaval of conflict was already widely used during the war and was presented with a variety of connotations. The island was a powerful image for this purpose (see postcard). Already during World War I, but in particular in the early 1930s, there was a deliberate move to boost the myth that neutrality defended by military means had preserved Switzerland from the war (see postcard).

Although the myth of the freely-chosen status of an island, which was guaranteed by military defence (“border occupation”), persisted until the end of the Cold War, the reasons why Switzerland was spared from the conflict were controversial from the outset. In Catholic circles, God was credited, while military defence was not only considered of secondary importance (see image), but, for example at the ex-voto in Flüeli, the efforts of the military were even ridiculed.[5]

The general public was also aware that Swiss neutrality was the result of an arrangement between the European powers in 1815.[6] On the 1914 postcard, only the French caption indicates that the renewal of neutrality was subject to consent. The German caption employs hazy wording that diverges from this fact, thus illustrating the different concepts of the state in the different language regions.[7] Moreover, during the war years, there was a predominant idea that the political and military symbol of the island was flanked by the Swiss economy’s global commercial involvement and activities, and the country's dependence on imports (such as coal, steel, grain). The connection of the idea of Switzerland as an island with self-chosen neutrality and the independence guaranteed by the military is the product of later years. However, this concept was established and legitimated by referring to Switzerland in World War I. Thus, before and during World War II, the island myth served to obscure the nation’s deeply political and economic dependency, and during the Cold War it concealed Switzerland’s economic integration in the Western Bloc. Today, the metaphor of Switzerland as an island is flourishing again within the context of the debate on Switzerland’s position with regard to the European Union (see image).

The Island as a Humanitarian Beacon↑

Already during the war, the myth of an island protected from conflict was charged with the humanitarian tradition that Switzerland laid claim to. Humanitarian aid to the war-ravaged world was also emphasised in part to pre-empt the accusation that Switzerland was deliberately and selfishly standing on the sidelines (see postcard). There has been a strong focus on the achievements of the International Committee of the Red Cross since World War I (see postcard), and also the internment of soldiers during the Franco-Prussian War and subsequently in both world wars. In addition, since the Cold War, Switzerland’s Good Services have been viewed in this light.[8]

The Island as Subject of Academic History↑

Historical research has returned time and time again to the island metaphor. The dominant narrative on Switzerland’s position in World War I, which has endured until recent times, reinforced the island myth. It did so particularly by viewing the state’s political actions and economic activities as separate spheres. Only in the past few years has the focus shifted to a unified perspective, and the idea of Switzerland as an island untouched by the confusion and strife of the world has been called a myth.[9] 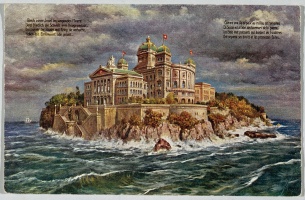 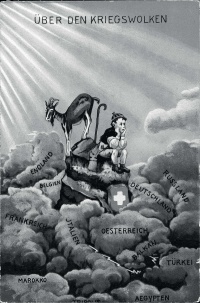 Above the clouds of war, postcard 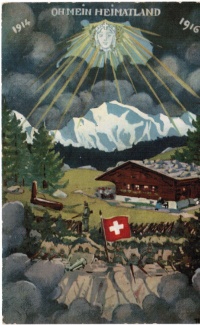 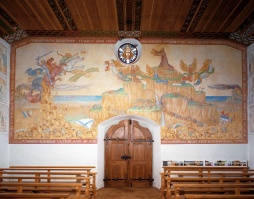 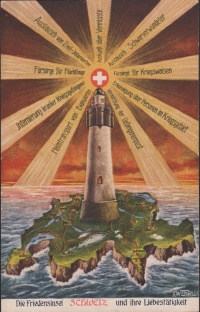 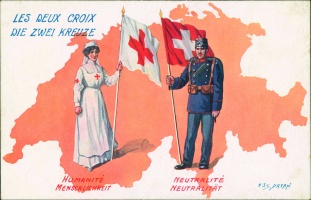