Shortly after the outbreak of the First World War, the Swiss army moved into a staggered defensive position in the northwest of the country, facing the Franco-German front. The southern border was only secured by weak units with a slight strengthening of forces after Italy’s declaration of war in 1915. This positioning remained almost unchanged until the end of the war. In a continuous cycle of replacement services, the army secured the country’s borders and neutrality. Accordingly, the deployment of the Swiss army during the First World War has gone down in popular history as the “border occupation” (Grenzbesetzung).

The Swiss Army and Neutrality in the First World War↑

On 4 August 1914, the Swiss Federal Council formally declared the country’s neutrality. Thereby, the Swiss government asserted its determination to remain neutral in the escalating war. On the same day, the Federal Council issued a directive to the commander-in-chief of the Swiss Armed Forces, General Ulrich Wille (1848-1925). The general was instructed to deploy the army in order to uphold Switzerland’s sovereignty and independence and defend the state’s territory against any kind of military aggression. Minor, mistaken border violations by the belligerents were to be settled directly by the army. In case of a declaration of war by a foreign power or a military assault on Switzerland respectively, all laws with regards to neutrality would no longer apply and Switzerland would adopt “the position and all rights of an independent belligerent power.”[1] The agreements which had been reached by the chief of the Swiss general staff, Theophil Sprecher (1850-1927), with the chiefs of the German and Austro-Hungarian general staffs respectively prior to the war regarding potential alliances in the case of war did not run contrary to these instructions. Accordingly, conversations with the French general staff in the second half of the war regarding a potential alliance (Plan H) were also compliant with neutrality.

Mobilisation and Defence Deployment of the Army↑

At the outbreak of war, the Swiss army did not possess a detailed defence plan. However, the army command had been informed by the German chief of general staff, Helmuth von Moltke (1848-1916), of the imminent German attack in the west through the so-called “ante portas” telegram of 31 July 1914. Following this, the army began its mobilization on 3 August and the units moved to a so-called mobilisation formation, concentrated in the northern part of the country. Following this, until 12 August, the army command moved the 1st army corps as well as the 4th division to the Jura region between Basel and La Chaux-de-Fonds. Behind these forces, the 2nd army corps was concentrated as a reserve in the area of Solothurn-Bern-Murten.[2] On the southern border between Lake Geneva and the Austro-Italian border, no actual defence deployment took place. The mountain brigade mainly occupied the three transversal lines leading through the alps. Over the course of the war, apart from a few minor adaptations, this basic deployment scheme did not change. The term “border occupation” of course does not take into consideration that almost half of the army was not positioned along the border, but in the interior of the country.

In August 1914, the deployment number of the Swiss army reached its climax with about 238,000 men under arms. As the main area of conflict was not near the Swiss border, large parts of the army were already released in the autumn. The goal was to uphold the protection of the border and neutrality with minimum effort while at the same time releasing soldiers for the sake of the country’s economy. Therefore, the Swiss Army entered a new phase in which units were called up according to a continuously adapted rotation schedule. The question of the number of soldiers to be under arms at any one time remained a source of dispute between the army command and the federal government until the end of the war. In the spring of 1915 for example, only about 60,000 men were under arms; in November 1916, the number was only 38,000. In the spring of 1917, deployment numbers were up again with 100,000 men and in November 1918, during the national general strike, the number of men under arms was about 110,000.[3] On average, the battalions of the regular army were under arms for three to four months, those of the Landwehr for about two months, and those of the Landsturm for only about one month per year. Throughout the entire duration of the war, soldiers of the regular army served about 500-600 days each in several so-called replacement services (Ablösungsdienste).

According to the defence dispositive of 12 August 1914, the main part of the army was concentrated in the Jura region and the Bernese midlands. This was done in order to prevent the belligerents from bypassing the Franco-German frontline in the south through Switzerland as well as to counter any direct attack on Swiss territory. The geographical positioning of the defence dispositive shows that at the start of the war the Swiss army command thought a French attack more likely than a German one. According to this dispositive, the 1st army corps, together with the 4th division, had the task of intercepting an attacking enemy near the border and delaying the attack in the north of the Jura. Together with the enemy of an attacker, the 2nd army corps was to stop the invading troops at the fortifications of Murten and Hauenstein and, if possible, repel them.[4] The two fortifications played a key role. The aim of the fortification of Murten was to cut off potential lines of attack from the west in the direction of Bern in the area of Lake Biel-Lake Murten-Saane. The fortification of Hauenstein was to prevent attacks from Basel in a southerly direction through the Jura region as well as to protect the central train junction of Olten. The weak 3rd army corps was to protect the southern borders of the country. Only with Italy’s entry into the war in 1915 were some small units deployed to the Swiss-Austrian-Italian border triangle.

Whereas over the course of the war the danger of an actual military attack on Switzerland decreased, the threat of local border violations, i.e. the violation of Swiss neutrality locally, increased. Accordingly, at the beginning of 1917, the army command issued explicit instructions for the border occupation troops. The troops placed directly at the border were to a) protect the neutrality of Swiss territory through the “guarding of the border,” b) to obtain information on military activity in the border area through “border observation,” and c) to support the police in the border regions and maintain a “border police service.”[5] In the context of this border and neutrality protection service, individual soldiers became casualties of the war which was taking place right where the Swiss borders began (for example at the Stilfserjoch at the southeastern border). The troops however were much more preoccupied with border policing (picking up deserters, smugglers, etc.). This border protection service has left a mark in the collective Swiss memory of the First World War in various ways and gave the deployment of the Swiss Army in the First World War its name with the term Grenzbesetzung.[6] 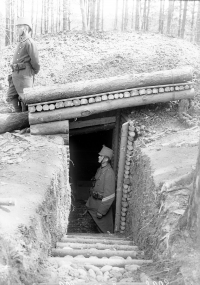 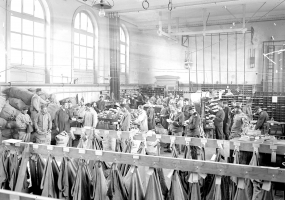 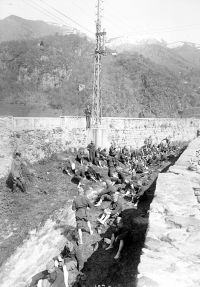 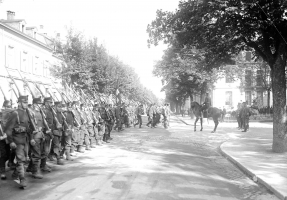