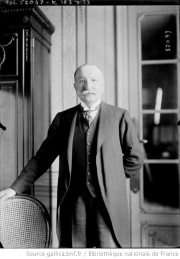 A Romanian politician, Dumitru Ionescu, commonly known as Take Ionescu, was considered by his contemporaries to be one of the most erudite statesmen in Eastern Europe. He was one of the main politicians who manoeuvred Romania’s entrance into the First World War on the Entente’s side.

“I was born a nobody without any fortune.”[1] Dumitru Ionescu’s (1858-1922) words show how hard it was to build a successful political career in the Kingdom of Romania before the outbreak of the Great War. In a period when only those “with a name and fortune” could work in politics, he managed to create a name for himself. He was “an exceptionally clever man; gifted with powers of oratory far above the average”, according to an English woman who worked as a teacher in Romania for a number of decades.[2] A lawyer and publicist, Ionescu is perhaps the most appreciated and the most abhorred Romanian politician of his generation.[3] Many of his contemporaries viewed him as a brilliant yet power-hungry man, willing to switch from one belief to another for political gain. He earned and squandered his money very easily. His house and pockets were open to all, which helps to explain his legendary popularity.

Take Ionescu had a soft spot for politics. Had he inherited a massive fortune, he might not have become a lawyer. He entered into politics soon after he earned his Ph.D. in law in Paris. In 1884, when he was only twenty-six, Take Ionescu was already a deputy registered on the governing Liberal Party’s election lists. He soon left the Liberal Party and joined the Conservatives. In 1891, when he was thirty-three, he became Minister of Education. During the next two decades, Take Ionescu was an indispensable presence in all the Conservative governments of Romania. A populist and very good organizer, Take Ionescu became a serious candidate for the leadership of the Conservative Party. However, his modest origins put him at a disadvantage, as his background was regarded as an insurmountable obstacle by a party that represented the interests of the Romanian aristocracy. In January 1908 he left the Conservative camp and founded the Democratic Conservative Party. Notwithstanding his political adroitness, Carol I, King of Romania (1839-1914) refused to appoint Take Ionescu Prime Minister, as he “was devoured by ambition and bereft of morality”.[4] It was at this time that he piqued an interest in gaining international recognition. Helped by his friend Alfred von Kiderlen-Wächter (1852-1912), the former German minister in Bucharest who was appointed chief of German diplomacy, Ionescu built his image as “a man of European discernment”.[5] He was an active presence during the Balkan Wars, trying to act as a foreign minister, not as an interior minister, which he was. Well informed and communicative, he was much sought-after by foreign journalists and diplomats: “There was hardly anyone of note in Europe whom he had not met”.[6]

When the First World War broke out, Take Ionescu’s party was part of the parliamentary opposition in the Kingdom of Romania. While on holiday traveling around Europe, he was urgently called home to attend the Crown Council on 3 August 1914 in Sinaia. Though he initially favoured Romania’s neutrality, he soon changed his mind. Some of his political opponents interpreted his decision as a means of coming to power by clashing with the premier, Ion I. C. Brătianu (1864-1927). Together with his former political opponent, Nicolae Filipescu (1862-1916), Take Ionescu manoeuvred Romania’s rapid entry into the war on the Entente’s side. A very good agitator, he held rallies throughout the country and coordinated a virulent press campaign. In December 1915 he delivered a fervent speech in the Romanian Chamber of Deputies:

I should have preferred that our entry into the war should coincide with the possibility of playing a European part. I would have wished for little Romania, which, in these circumstances, thanks to its position, thanks to this unique historical moment which will never return, could, small power though she be, have done the work of a Great Power.[7]

The most significant achievements in Ionescu’s political career were fulfilled during the two years of Romanian neutrality. After Romania’s entry into the war on the Entente’s side and the disastrous military campaign in the autumn of 1916, Take Ionescu agreed to join a national union government led by Brătianu. He first acted as a Minister Without Portfolio (December 1916-July 1917) and later as Vice-President of the Council of Ministers (July 1917-February 1918). He did not want to be at the mercy of the German and new Romanian authorities after Romania had capitulated. Unlike Brătianu, who ran the risk of staying in the country, Take Ionescu left Romania. In July 1918 he settled in Paris, where he was involved in diplomatic activity as president of the National Council of Romanian Unity. In the autumn of 1918, the National Council, officially recognized by the Entente governments, represented defeated Romania.

The End of his Career↑

Through his activities and connections, Take Ionescu, along with Premier I.C. Brătianu, would have best represented Romania’s interests at the Paris Peace Conference. Unfortunately, as Liberal minister Ion G. Duca (1879-1933) noticed, “intransigent pride” prevented the two Romanian politicians from working together while they both lived in Paris for a few months.[8] Some diplomats who attended the Paris Peace Conference felt that Ionescu’s diplomatic and conciliatory spirit would have served Romania’s interests better than Brătianu’s irritating intransigence.[9] Both Romanian politicians made a grievous mistake by not working together. After the 1919 parliamentary elections, Take Ionescu’s party lost its political influence. He became foreign minister (June 1920-December 1921) in the cabinet led by the former General Alexandru Averescu (1859-1938). His main achievement was the creation of the Little Entente, a mutual defence agreement between Romania, Czechoslovakia and Yugoslavia, whereby the countries agreed to respect the status quo established during the Paris Peace Conference. In December 1921 Ionescu was finally appointed Prime Minister of Romania. His term lasted only three weeks, as he fell prey to the political intrigues hatched by Brătianu and Averescu. Disappointed, he set out on a journey across Europe. He died unexpectedly in Rome in 1922 before having had a chance to edit his memoirs about the origins of the First World War. 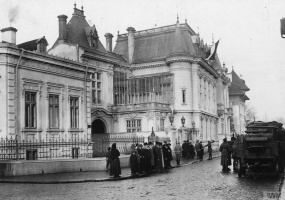