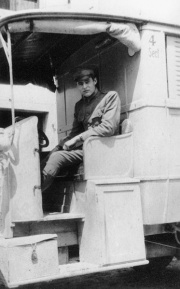 Ernest Hemingway was an American who served as a Red Cross ambulance lieutenant in Italy in 1918. He was severely wounded after spending only a few weeks at the front. He later became one of the most renowned American writers, winning the Nobel Prize for literature in 1954.

Ernest Hemingway (1899-1961) is widely regarded as one of the most significant and influential writers of the 20th century. Generations of readers have appreciated the accessibility and accomplishment of his prose – he is both a readers’ writer and a writers’ writer. Moreover, his style’s sharp realism, at once intimate and distancing, taciturn and revealing, sure and uncertain, burst onto the scene in the wake of the Great War. It seemed to befit the moment.

Hemingway’s war experience was, however, atypical for American and British soldiery. He arrived in northern Italy in early June 1918 as a Red Cross ambulance corps volunteer with an honorary lieutenancy. A month later, on 8 July, he received a severe wounding mostly to his legs from an Austrian mortar round at a post on the Piave River. Although another Red Cross volunteer had been killed nearby a few weeks earlier, Hemingway was the first American wounded in Italy. By the following January he was home in Oak Park, Illinois, not yet twenty years old.

Though healed enough to permit an active life of skiing, hunting, fishing, and other sports, the injury bothered him for the rest of his life. Some of the 200 odd bits of shrapnel never came out. Literary scholars have created a substantial body of analysis about the effects of this traumatic experience on his psyche and his writing. Additionally, even though he did not experience the trenches of the Western Front, the “typical” experience many historians concentrate on, his work deeply engages the era’s challenges to modernity, nationalism, and gender.

We can chart the war’s consistent appearance throughout Hemingway’s writing career. Three of his books of fiction from the 1920s feature veteran protagonists: In Our Time’s Nick Adams (1925), The Sun Also Rises’ Jake Barnes (1926), and A Farewell to Arms’ Frederic Henry (1929). Nick Adams became something of a lifelong avatar, his age and circumstances in each new short story roughly matching Hemingway’s at the time of composition. Jake Barnes hardly discusses or reflects on his time flying in Italy during the war, but he hangs around in France and Spain with other American and British war survivors of the “lost generation.” We learn no details of his war days beyond the fact of his wound, so that his narrative acquires something of the spirit of the Nick Adams postwar story “The Big Two-Hearted River” from In Our Time, which Hemingway was to later famously characterize as a war story that does not actually mention the war. Indeed none of the book’s main stories directly include Nick Adams’ wartime experiences.

Frederic Henry’s duties as a volunteer lieutenant in the Italian ambulance service most closely resemble Hemingway’s, but the writer carefully distinguishes the biographies in order to distinguish the persons and attitudes. Henry was in the war for years, not weeks, and he received his admittedly similar wound and witnessed the Caporetto retreat before Hemingway even stepped foot in Italy. Hemingway may have fallen in love with one of his nurses, but the novel’s romance and consequence is all invention. Readers should be very wary of conflating Frederic Henry’s response to the war with Hemingway’s.

In the 1930s the war continued to insert itself into Hemingway’s writing, sometimes in unexpected places, such as his nonfiction bullfighting primer Death in the Afternoon (1932). He indirectly reprised his ambulance work when he became chair of an organization that raised funds to supply ambulance and medical personnel and equipment to the Republican side during the Spanish Civil War; more than once in his war correspondence from Spain he referenced the Great War.

After learning from a doctor in Venice of his impending death, the protagonist of his World War II novel Across the River and Into the Trees (1950) makes a point of visiting the site of his wounding in the Great War – beside the Piave River. The character’s return echoes Hemingway’s disappointing one of 1922, as conveyed in his article “A Veteran Visits the Old Front,” although separated by decades rather than years. The male writer in the posthumous The Garden of Eden (1986) is also a Great War veteran, another pilot, this one on his honeymoon. In one scene we see navy vessels undergoing training exercises; we also briefly meet an old war comrade, a colonel with an uncanny (even authorial) insight and wisdom into the main characters’ lives.

There is hardly an American veteran-turned-literary-artist who could deny, who would even want to deny, Hemingway’s presence in their imagination, from Norman Mailer (1923-2007) and James Jones (1921-1977) to Tim O’Brien, Tobias Wolff, and Anthony Swofford.