Germany’s offer of unconditional support to its Austro-Hungarian ally in July 1914 remains one of the most controversial decisions in modern history. Historians have interpreted the blank cheque in several, often contradictory, ways – either as a German attempt to escalate a regional crisis into a wider European war or as a move to localise war in the Balkans. Most historians agree that the blank cheque marked a victory for the war party in Vienna.

In issuing the blank cheque, German leaders made a number of faulty assumptions. They believed that Austria-Hungary was ready to initiate war against Serbia immediately and that a rapid strike would present Europe with a fait accompli. They reckoned that the Tsarist regime was not militarily ready to risk a general European war. Moreover, they thought that monarchical solidarity would trump pan-Slav sentiment, that the Tsar would not support a state that had allegedly harboured the assassins of the heir to the Habsburg throne. In other words, the "blank cheque" was designed first and foremost to secure a triumph, either political or military, for the Central Powers in the Balkans. The "blank cheque" was vital in bolstering Austro-Hungarian leaders in their decision to embark on war against Serbia.

Bethmann Hollweg had also built into his calculations the risk of a general European war and in supporting Austria-Hungary he believed that were a European war to happen, better that it happen in 1914 than several years later. This scenario, however, was not considered a probability on 5 July. When that prospect became a probability in late July, Bethmann Hollweg and Wilhelm II sought, but failed, to amend the cheque. 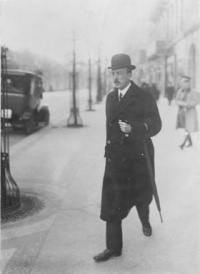 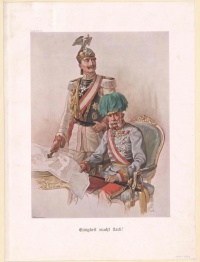 Franz Joseph I and Wilhelm II