The Große Hauptquartier (Great Headquarters or GHQ) was the strategic command centre of the German armed forces for the duration of the war. It comprised representatives of all political and military decision-making bodies.

The constitution of 1871 made the German emperor the nominal commander-in-chief of all land and naval forces in case of war. With mobilisation in August 1914, Wilhelm II, German Emperor (1859–1941) commissioned the chief of the General Staff with the de facto command of the army, while the chief of admiralty would have command of the navy. At the same time, the Große Hauptquartier was established.

All top-level political and military decision-making bodies dispatched their ministers or echelons to the GHQ: the Kaiser and his cabinets, including members of the court; the chancellor; the Prussian ministry of war; the Naval Office; the Foreign Office; the military plenipotentiaries of the German states; and foreign attachés. But the GHQ’s real core was the General Staff, now converted into the Oberste Heeresleitung (Supreme Army Command or OHL). Because the war lasted so long, the ministers eventually returned to Berlin and left representatives.

Apart from Albert I, King of the Belgians (1875–1934), Wilhelm II was the only head of state who spent most of his time in the GHQ. This decision was motivated by his self-perception as a roi connétable ("constable king"). The realities of supreme command over industrialized mass warfare led to the Kaiser’s exclusion from the operational decision-making process within weeks; nevertheless, he remained a factor in strategic issues and personnel policy.

In order to up keep communications with troops in the field, the GHQ had to relocate according to operational hotspots. The GHQ was established on 16 August 1914 in Coblenz, but moved to occupied Luxembourg at the end of the same month. Following the frontier battles in August and September, GHQ moved again, this time to the French town of Charleville-Mézières. Between April 1915 and February 1916, the GHQ was located in Pless castle in Silesia in order to ensure effective coordination with the Austro-Hungarian allies. Charleville and Pless followed again in 1916. Between April 1917 and February 1918, the GHQ occupied the German spa town of Bad Kreuznach. The town became the centre for the preparation of the 1918 spring offensive. A flood in January 1918 forced the GHQ to move to the Belgian town of Spa. With the start of the spring offensive on 21 March 1918, a forward echelon of the OHL moved to Avesnes, France. On 9 November 1918, Wilhelm left Spa for his exile in the Netherlands, and the GHQ retreated to Cassel, Germany.

The Große Hauptquartier resembled an organisational and political-military compromise between the principles of monarchic rule and the demands of modern military command and control systems. The surprising longevity of the institution may have been because of the static character of the war, which allowed the establishment of permanent command centres. 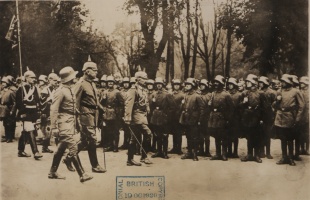