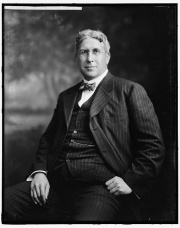 Lindley Garrison was a prominent lawyer and politician from New Jersey who rose to the rank of vice chancellor of the state in the early 1910s. Because of his prominence, Woodrow Wilson selected him to be his first secretary of war. However, the two clashed on how best to prepare the nation for war, and Garrison resigned in 1916. He returned to the private practice of law.

Lindley Garrison (1864-1932) was born 28 November 1864 in Camden, New Jersey. His father, Joseph F. Garrison (1823-1892), was a former doctor who abandoned that field to become an Episcopalian priest and law professor. The younger Garrison attended public schools in New Jersey and finished his academic career at the Protestant Episcopal Academy in Philadelphia; then a year at Phillips Exeter Academy; Harvard University; before receiving a Bachelor of Laws from the University of Pennsylvania in 1885. In 1888, he had already become partner at the firm of Redding, Jones & Carson. In 1900, he founded his own firm, Garrison, McManus, & Enright, and five years later he was appointed vice chancellor of the state.

In 1913, the newly inaugurated President Woodrow Wilson (1856-1924) nominated Garrison to be the secretary of war because of his organizational skills, knowledge of the law and prominence in Democratic politics. Garrison quickly gained the support and respect of the Army General Staff who saw him as a great administrator. Garrison immediately clashed with Wilson over the timetable for granting independence to the Philippines. Garrison disagreed with the president’s plan to set a definite timeline for independence.

However, the greatest differences between Wilson and Garrison were over the size and organization of the army. Garrison advocated the Continental Army Reserve Plan that called for a regular army of 140,000; a National Guard of 130,000; and a reserve Continental Army of 400,000 to 500,000 that enlisted men for six years to be trained two months a year for the first three years. Isolationist members of the Democratic Party feared this plan would create too large a military and make it easier for the president to use armed forces in a foreign war. While Wilson at first supported the Continental Army Reserve Plan, he quickly abandoned it for the Hay Plan that called for federalization of the National Guard (state-controlled units) to be the reserve for the federal US army. Because of these differences, Garrison resigned as secretary and Newton D. Baker (1871-1937) replaced him.

After stepping down, Garrison returned to the law as a member of the firm of Hornblower, Miller & Garrison. The firm served as the receiver of the Brooklyn Rapid Transit Company, when it was reorganized in 1918, and Garrison was appointed to head the project. In 1930, Garrison joined the law firm Miller, Otis & Farr. He died on 18 October 1932 at his home in Sea Bright, New Jersey. 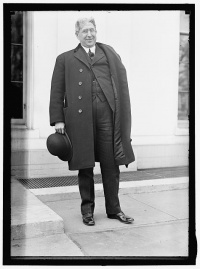