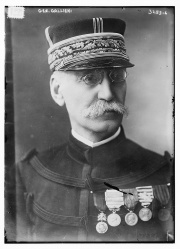 General Joseph-Simon Gallieni was a colonial officer who became the Governor of Paris in 1914 and Minister of War in 1915.

Before World War I↑

As a young officer, Joseph-Simon Gallieni (1849-1916) left the French military school of Saint-Cyr at the beginning of the Franco-Prussian War in 1870, during which he was captured. Following the war, Gallieni pursued his entire career in the French colonies, including French Sudan, where he fought the great African leaders Mamadou Lamine Dramé (1840-1887) and Samori Ture (c.1830-1900). Promoted to colonel, he was sent to Tonkin (French Indochina) for four years between 1892 and 1896, where he had Hubert Lyautey (1854-1934) under his command. Together with Lyautey, Gallieni annihilated piracy and began to develop his colonial method. Known as the “oil spot,” this method was formalized in Madagascar between 1896 and 1905. The policy was not to proceed using penetrating columns, which was considered unnecessarily destructive, but rather to extend colonial expansion gradually after complete pacification. By practicing an indigenous policy he called the “politics of race,” the policy sought to ensure the cooperation of traditional leaders.

After 1905, he became a corps commander in France and held numerous honorary positions before retiring in April 1914. Recalled in August 1914, he became Governor of Paris and organized the defence of the capital. He said that he had “received the mandate to defend Paris against the invader. This mandate, I will fill it to the end.”[1] He transformed the capital to defend it but increasingly faced confrontation with Joseph Joffre (1852-1931), his former subordinate to whom he now owed obedience. Appointed Minister of War in October 1915, Gallieni decided to protect the colonial troops - mainly “tirailleurs sénégalais” - from the harsh winter by creating “winter camps” in southern France. Suffering from cancer, he died on 27 May 1916, following a surgery. He received a state funeral and was raised to the dignity of Marshal of France posthumously on 7 May 1921.