Paul Eyschen, prime minister of the Grand Duchy of Luxembourg from 1888 to 1915, insisted on the neutral status of Luxembourg, but practiced a policy of accommodation towards German occupying forces during the war. This policy was disapproved of by the Allies and led to the international isolation of Luxembourg after the war.

Paul Eyschen (1841-1915), a member of parliament in 1866 at the age of twenty-five and minister of justice from 1876, was prime minister of the Grand Duchy of Luxembourg from 1888 to 1915. His twenty-seven years as head of government are still a national record. During this time, the department of foreign affairs and its domain were also under his control. A monarchist, utilitarian liberal favoring an active role of the state, he worked throughout his political career to increase the prosperity of Luxembourg under the unarmed neutrality status imposed by the Treaty of London in 1867. Eyschen, who had studied law in Paris and Bonn, was known for being highly cultivated in matters relating to France, while being at the same time a great admirer of Otto von Bismarck's (1815-1898) Germany, where he had been chargé d'affaires between 1875 and 1888.

Eyschen’s foreign policy was imbued with a realistic approach to the international position of the country. He scrupulously respected the duties of neutrality and pleaded for the rights of neutral states at the Hague peace conferences of 1899 and 1907. His main concern in 1914, at the outbreak of war, was the same as in 1888: to do nothing that could displease Germany. Luxembourg had been part of the Zollverein since 1842 and was, politically and economically, largely dependent on its powerful neighbor.

During the German invasion of 2 August 1914, in contrast to Eyschen’s pre-war statements to the international press, the Luxembourg authorities did not passively resist. Instead, in agreement with the sovereign, Marie Adelheid, Grand Duchess of Luxembourg (1894-1924), princess of the German-descended house Nassau-Weilburg, Eyschen stuck to his traditional foreign policy, avoiding acts that could offend Germany. An accommodation policy towards the occupying German military forces was implemented. Luxembourg institutions carried on and the commander of the occupying troops was ordered not to intervene in the internal affairs of Luxembourg unless the army's interests were threatened. The political attitude of the government and the grand duchess was shared by the parliament and supported by public opinion.

The Eyschen government and the grand duchess protested against the invasion in a very measured tone, and Eyschen assisted in the expulsion of French and Belgian ministers. Additionally, financial compensation was accepted from Germany, as the price for the occupation, and the Kaiser was received at the Grand Ducal Palace. As a result, the Allies in France and Great Britain concluded that the grand duchy had chosen its side, namely that of Germany. Throughout the war, the steel industry continued to work directly or indirectly for the German war effort, showing the limits of the officially proclaimed policy of neutrality.

When the prospect of rapid German victory vanished, Eyschen tried in vain, through visits in Bern and The Hague, to gradually regain the sympathy of the Allies, who held the key to feeding the occupied country. Because of playing the German card in August-September 1914 and sticking to the traditional foreign policy in order to preserve the independence of the country or at least some autonomy in the form of a future "Bundesland Luxemburg", like the grand duchies of Hesse and Baden, Eyschen and Grand Duchess Marie Adelheid found themselves completely isolated in international circles. Paul Eyschen died suddenly on 12 October 1915. He had just returned from a visit to Bern where he tried, once again in vain, to convince the French diplomats to stop Allied bombings against Luxembourg railway stations and steel plants. His unexpected death at a time when he was facing failures in his foreign and internal policy - continuous conflict in his government between the Left Bloc, an alliance between the Social Democratic Party and the Liberal League, and the Catholic grand duchess about the nomination of liberal and social democratic candidates - led to rumors that he had committed suicide.

None of Eyschen's successors were internationally known figures like him. They continued his accommodation policy. In 1918, the announcement of the marriage of Antonia, Princess of Luxembourg (1899-1954), a sister of Marie Adelheid, with Rupprecht, Crown Prince of Bavaria (1869-1955), and the hesitation of the Luxembourg government to denounce the Zollverein irritated the Allies. Eyschen's and his successors' foreign policy weakened the grand duchy's position at the time of the peace settlement. Belgium sought the annexation of Luxembourg. Luxembourg had to play on the Franco-Belgian rivalry to finally survive as an independent country. Maintaining independence in the new Europe still required the abdication of Marie Adelheid and her replacement by her sister Charlotte, Grand Duchess of Luxembourg (1896-1985) in January 1919. After a popular referendum (in September 1919) that confirmed Charlotte and the monarchy with nearly 80 percent, France and Belgium recognized the new grand duchess. 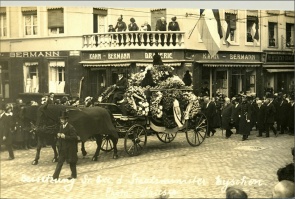