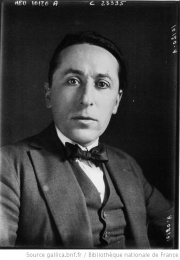 Roland Dorgelès is the author of the pacifist novel Wooden Crosses (1919), a great classic of French war literature. Although based on his personal experience, he was convinced that fiction could be an outlet to express the truth.

Roland Dorgelès (1885-1973) was a figure of the Montmartre bohemian scene who became known before the war as a journalist and columnist. Declared unfit for service in 1907, he enlisted in August 1914, became a machine gunner in the 39th infantry regiment in September and fought in the Laon (Aisne) and Neuville Saint-Vaast (Nord) sectors. He never stopped writing, however, and sent his articles to the daily paper L’Intransigeant. He joined the air force in the autumn of 1915, but suffered a flight accident in July 1916. After becoming an instructor, he delved into his personal notes and wrote Wooden Crosses. He began to write for the Canard enchaîné in 1917 and became friends with Henri Barbusse (1873-1935) and Paul Vaillant-Couturier (1892-1937).

Wooden Crosses was published in 1919 and was a strong contender for the Prix Goncourt that year. Although shortened by the censors, the book was immediately acclaimed by the public, which appreciated its pacifism, humanity, as well as its witty originality. The author used the cut and censored passages to write another book in a similar vein, Le Cabaret de la belle femme (1919). In 1929, after becoming President of the Association des Ecrivains Combattants (Association of Soldier-Writers), he was strongly criticized by Jean Norton Cru (1879-1949) for his literary inventions. Supported by comrades such as journalist Jean Galtier-Boissière (1891-1966) and historian Jules Isaac (1877-1963), Dorgelès stood his ground and maintained that literature is capable of conveying the truth about war. Film director Raymond Bernard (1891-1977) adapted Wooden Crosses for the big screen in 1931.[1] Throughout his writing career, Dorgelès never ceased to express his solidarity with war veterans and proclaim his loyalty to the dead (Bleu horizon, 1949).