“United as we were on the battle front,” the rallying cry popularized by one of the two major French veterans’ associations created just after the First World War sums up the process of reconstruction of the world of human relationships which existed in the trenches on the Western Front and which developed in the years following the war. Yet the assessment that a cohesive comradeship existed across army ranks can be directly challenged by an examination of the differing forms of solidarity expressed by rank and file soldiers and officers.

War comradeship is rarely specifically mentioned in veterans’ testimonies but became the basis for the formation of a universal experience lived by the soldiers of the “fire generation.” The notion of comradeship was originally a prominent in discourse promulgated by the authorities and ultimately played an important part as a unifying theme in the discourse of war veterans’; from there it became a fundamental element of language in France. The particular strength of this notion of comradeship in the French army is based on the definition of republican citizenship, which guarantees all citizens freedom, equal rights and duties. The unity of the nation is reflected in universal male conscription and membership in the army affirmed fraternal equality.

In the post-war context, newly created, powerful war veterans’ associations stressed their cohesion and comradeship to promote their specific demands. Several years after the conflict, historians portray veterans’ war experience by focusing on a kind of consensual history in which “comrades-in-arms” symbolize the positive aspect of their wartime commitment.

How did the concept of comradeship play out on the battlefront? Who were these “brothers-in-arms”? The bonds of shared experience, the sense of equality, sociability, solidarity embodied by the notion of war comrades are rooted in military language and are relevant to soldiers who share the same boardrooms or barrack rooms. Such bonds were particularly strong in the British army, for instance, which relied on the constitution of “pals” groups. But in an army of conscripts such as the French army, comradeship also stems from civilian identity and, in wartime, from the identity of mobilised soldiers as combatants. These three forms of identity and the way in which they are perceived depend both on very concrete elements (the fact of belonging to fighting units, of being close to the front line, being exposed to gunfire, and taking part in the fighting) and very subjective ones, which may vary according to different periods and assignments.

A soldier put on a uniform without losing his social and cultural identity; military assignments were just an extension of the social segregation which existed also in peacetime. If military authorities strove to strengthen the cohesion of the troops, many elements worked against it: diverse military identities, regional specificities, which may have brought people together but also altered relationships, political oppositions as well as the distrust which existed between career officers and those promoted from the ranks. The former mainly came from the higher professions. They shared a system of common social codes different from those of the rank and file, strengthened by taking part in a common military activity and enjoying specific advantages. A careful scrutiny of these differences disproves the theoretical military comradeship stressed by the official discourse.

Military brotherhood is one element of comradeship. It is built upon the fact of belonging to a specific military unit and its esprit de corps. It is forged in the ritual and pageantry of the unit, in particular at the squad scale, sharing moments, even simply at meals, but also through collective practices characteristic of the leisure class such as hunting and fishing (which were not banned from the front) or the practice of collective sports encouraged by military authorities to strengthen the bonds between the men.

There also exists a deeper form of comradeship, a kind of selective friendship particularly noticeable in veterans’ testimonies. This was comprised of a small band of friends (three or four people) for whom the practice of photography became the privileged context for solidarity. Yet these friendships were weakened by turnover, deaths, wounds, changes of assignments. As the war went on, the deaths of close friends became more numerous, especially in 1915. It is then that war comradeship crystallizes. One becomes closer to those with whom one shares exposure to gunfire rather than to “shirkers” or “brass hats.” Even enemies appear in some testimonies as comrades because they too participated in trench warfare.

A sense of inequality of treatment arose between the rank and file and the junior officers, who were themselves conscripts. Such is the context in which there appears a divide between those who vindicate themselves as combatants and the others, either military men or shirkers. Behind that subtle hierarchy, developed according to the higher or smaller proximity of the front line, republican social values and policies in France came into question.

The definition and strength of the notion of war comradeship thus developed as a reaction against that inequality which was felt by rank and file soldiers’ destinies while “The Sacred Union” continues to be praised in the official discourse. Both determined the emergence of what might be called a combatant middle class who would have as heralds its best educated members. It defines itself in opposition to the home front and to those who eventually escaped the violence of the war and builds up in the post-war years the framework of veterans’ values. 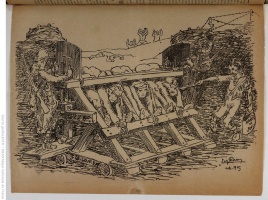 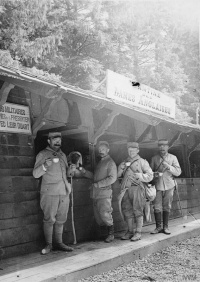 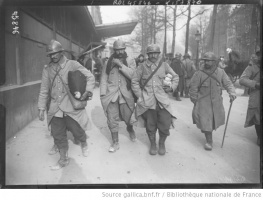 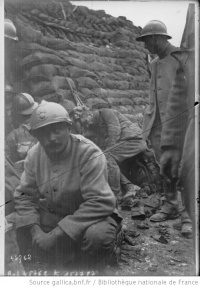 In the trenches of Champagne