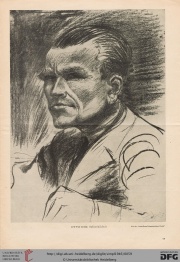 In his oeuvre, the German painter Otto Dix dealt more intensively with wartime experiences than any other artist. Hundreds of drawings and gouaches capture industrialised combat. After the Great War, he created works that are among the most important examples of anti-war art.

Otto Dix draws in the trench↑

Otto Dix (1891-1969) volunteered for war, like many other German artists and writers. Afterwards, he said: "war was a terrible thing but nevertheless something powerful. [...] You have to have seen people in this untamed state to know anything about them."

During his long training period in Dresden and Bautzen from 1914 to 1915, he painted Self-Portrait as Shooting Target and Self-Portrait as a Soldier, which showed him with a shaved head, deformed by fever. In 1915, Self-Portrait as Mars came into being. At this time, Dix was still influenced by expressionism and futurism.

From autumn 1915 to the end of the war, he was based in the western theatre, except for a short mission to the Eastern Front in 1917. In November 1915, Dix was promoted to officer and received the Iron Cross 2nd Class. The abstract, dynamic and expressive compositions by Dix that were published in 1961[1] originated in the trenches. He sought to represent the characteristic dynamics of war in typical moments, which the artist himself experienced as machine gunner at the front.

Veristic-realistic works followed after the end of the war: in 1923, the large-sized painting Trench, lost today; in 1924, fifty etchings as part of his cycle of prints War – primarily depicting the consequences of battle; from 1929 until 1932, War Triptych; and, in 1936, Flanders, his last painting in the context of World War I. Furthermore, Dix approached the theme of the consequences of war by using war cripples as a central subject during the early years of the Weimar Republic. Later on, the Nazis defamed these works as “painted military sabotage.”[2]