Expressionism is a movement that originated in Germany before World War I and extended to the period between the two major European wars. It promoted subjective representation and “expressive” distortions in art.

Expressionism, properly speaking, is a modernist art movement that originated in Germany before World War I. Its main objective was to represent reality from a personal perspective, subjecting it to radical distortions for “expressive” effect in order to evoke emotional states or ideas. Expressionist artists sought to “express” psychological experiences rather than physical facts. It remained popular during the post-war Weimar Republic, extending to architecture, literature, theatre, dance, film and music. Its main representatives were the artists Ernst Ludwig Kirchner (1880-1938), Fritz Bleyl (1880-1966), Erich Heckel (1883-1970) and Karl Schmidt-Rottluff (1884-1976), grouped around Die Brücke; Wassily Kandinsky (1866-1944), Franz Marc (1880-1916), Paul Klee (1879-1940) and August Macke (1887-1914) grouped around Der Blaue Reiter; and Max Beckmann (1884-1950), George Grosz (1893-1959) and Otto Dix (1891-1969), who leaned towards the Neue Sachlichkeit.

There are several hypotheses about the origins of the term “expressionism.” It may have been first used by Paul Cassirer (1871-1926) in 1910 when discussing the work of Max Pechstein (1881–1955). Or, it may first have been referred to by the Czech art historian Antonin Matějček (1889-1950) in 1910, contrasting it with impressionism: “An Expressionist wishes, above all, to express himself...[He rejects] immediate perception and builds on more complex psychic structures...assimilated and condensed into more general forms, into types, which he transcribes through simple short-hand formulae and symbols.”[1] Additional research by Armin Arnold has demonstrated that the word had already been used in 1850 by Tait’s Edinburgh Magazine; and, in fact, the notion of “expressionism” was very much in vogue at Gustave Moreau’s (1826-1898) Ecole des Beaux Arts between 1891 and 1898, where he encouraged individual and spontaneous “self-expression” in his pupils, one of whom was Henri Matisse (1869–1954). Between 1900 and 1901, Matisse would share a work-studio with several young artists with similar expressive tendencies, including André Derain (1880-1954). The next few years culminated in the major “Fauve” exhibition of 1905 in Paris; his circle now expanded to include Georges Braque (1882-1963), Othon Friesz (1879-1949), Kees Van Dongen (1877-1968) and Maurice de Vlaminck (1876-1958). Most of the contributors to the Fauve exhibition eventually came to consider themselves as “expressionists”.[2]

Following the same liberating spirit of the Fauve exhibition, four German painters, Ernst Ludwig Kirchner, Fritz Bleyl, Erich Heckel and Karl Schmidt-Rottluff got together in Dresden to form Die Brücke, arguably the founding base for German Expressionism, though they did not use the term itself. In contrast to their French counterpart, the Brücke members had specific Germanic influences, such as James Ensor (1860-1949) and Edvard Munch (1863–1944), among others. A few years later, in 1911, a like-minded group of young artists formed Der Blaue Reiter in Munich. Among their members were Wassily Kandinsky, Franz Marc, Paul Klee and August Macke. While originally the denomination “expressionists” was used to refer primarily to French painters, this classification eventually came to be generally accepted to encompass both French and German artists with a similar style.

German artists grouped under this rubric demonstrated a clear dissatisfaction with the mere “representation” of reality, coupled with a willingness to break away from traditions. However, when applied to German artists, the term “expressionism” polarized what was already a state of mind. Indeed, it was inseparable from a feeling of crisis. Expressionism was not only an aesthetic style, but a trend closely linked to German history between 1910 and 1925, when the country was suffering from rapid industrialization that had led to a collapse of values, and to fragile human relationships, frenetic city rhythms and forced dependences. Antagonism against the authorities flourished; some artists were attracted to anarchism; others to Nietzschean philosophy. To the Germans, Expressionism seemed to offer the possibility of emotional release from excruciating discontent, feeding a spiritual, if sometimes quasi-pagan, longing for freely externalized feeling. It also involved a primitivizing life-style that sought liberation from the inhibitions imposed by the nation’s nobility and bourgeoisie.

The influence of Die Brücke and Der Blaue Reiter extended over the interim of the two European wars. At the outset of World War I in September 1914, many Expressionists believed the conflict could be the apocalyptic event that would finally overthrow the self-satisfied materialism of the establishment they had fought against. Many artists enlisted for active duty: Kirchner, Macke and Marc, to name just a few. They would soon endure terrible experiences at the war front. Kirchner was discharged soon after enlisting and admitted to a sanatorium after a mental breakdown. Macke died in battle at Champagne in 1914, while Marc was killed instantly by a shell splinter at Verdun in 1916. Other Expressionists avoided the front lines by volunteering for the medical corps, as was the case of Max Beckmann. This did not prevent these artists from experiencing an equally severe disappointment with the war. Beckmann’s style, for instance, would undergo a dramatic transformation immediately following the hostilities. An illustrative example of the demoralizing effects of the war is Kirchner’s painting “Self-Portrait as a Soldier”, which depicts the painter in his studio, dressed in a uniform with an amputated arm. The unresolved conflict between the artist’s outfit and the studio setting underlines a sudden loss of his former idealism. Other surviving artists showed a similar reflection of the war front, violently reacting to its political causes. From their regenerative impulse emerged a positive outcome in art and culture, which would eventually find its central base in Berlin.

The period between the two great wars, from 1919 to 1939, was characterized, especially in Germany, by a crude and satirical type of Expressionism, which aimed to send a sociopolitical message. It was then that a new style called Neue Sachlichkeit appeared. Its regenerative goal was to correct the dramatic circumstances in which the country had been submerged, having just lost the war. During the subsequent Weimar Republic, which extended from 1919 to 1933, artists of this new current reacted with irony and mordacity to the sociopolitical situation of post-war Germany, marked by the catastrophe of World War I, the accompanying economic crisis and the threat of National Socialism. Just as the earlier Die Brücke years had intuited the tragedy of the first major European conflict with its dramatic and snug expressionism, the Neue Sachlichkeit would manifest itself through intelligent and demolishing caricatures intended to indict a country falsely guided by a pretense of strength and power, being driven instead to a second major confrontation. In addition to Max Beckmann, these new Expressionists included George Grosz and Otto Dix. Their work evidenced a clear reaction to the previous Expressionism, brandishing realism and classicism against the former introverted emotionalism. 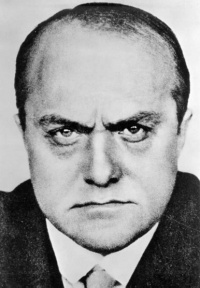