P.W.A. Cort van der Linden was the Dutch prime minister from 1913 to 1918. His cabinet managed to preserve Dutch neutrality throughout the war.

Pieter Wilhelm Adriaan Cort van der Linden’s (1846-1935) political views were shaped by his father, a prominent liberal member of parliament for nearly forty years in the second half of the 19th century. Throughout his long career, Cort van der Linden continued to hold on to the idea that a politician should be independent and work toward the common good. He eschewed ‘modern’ party politics, which he believed favoured the party rather than the people and focused on short-term rather than on long-term solutions. For that reason he never joined a political party. After a career as a professor of economics and law he was Minister of Justice from 1897 to 1901 and member of the Raad van State (Council of State) from 1902 to 1913. In that capacity he became one of Wilhelmina, Queen of the Netherlands’s (1880-1962) closest advisors.

Cort van der Linden was sixty-seven when Queen Wilhelmina asked him in 1913 to form the next government. As none of the parties had won an outright majority in the last elections, Cort van der Linden was the ideal man for the job: he formed an extra-parliamentary government consisting of liberal politicians who had no close links with any of the three (radical, moderate and conservative) liberal parties and had not been elected to parliament. His government’s strategy was to find a parliamentary majority, either with the left or the right, for each individual piece of legislation.

When the war broke out, Cort van der Linden was convinced that the country was best served by remaining neutral, and throughout the war this belief informed all his government’s actions. Holland found itself in an extremely difficult position: it was a small country right in the middle of the war zone, and it feared the loss of its colonial possessions (the Dutch East Indies, now Indonesia). Yet it could not remain aloof: Germany needed Dutch supplies, and for that reason the British included Holland in their economic strangulation of Germany. In the course of the war both belligerents exerted increasing pressure on the Netherlands, and the Dutch felt that their hands were tied: they could not fight back without relinquishing their neutrality. The government’s solution was to involve private enterprise and leave official contacts with the belligerents to them. The best example of this is the Nederlandsche Overzee Trustmaatschappij (Netherlands Overseas Trust, NOT), set up in November 1914.

The Entente rightly suspected Cort van der Linden of German sympathies – he believed that the Dutch and Germans were ‘brother people’ – and this was reflected in his English nickname: ‘Caught unter den Linden’.[1] But he never allowed his personal sympathies to prevail, which was not likely to happen anyway, as the majority of his cabinet were pro-Entente.

Cort van der Linden’s war strategy was the same as he had adopted in national politics: through secret consultations with a belligerent he tried to reach an acceptable compromise in each individual crisis. To shield the government from direct involvement, he allowed the business world to strike bilateral deals with the belligerents, something a neutral government couldn’t possibly be seen to do. His brinkmanship ultimately did achieve his main goal: Holland remained neutral throughout the war, but this neutrality came at a price. Many (Queen Wilhelmina among them) felt that the government too easily and too often caved under foreign pressure; neutrality became synonymous with political weakness and lack of national pride. The Liberal Party was heavily defeated in the 1918 general elections, but after four gruelling years the cabinet was quite relieved to leave office and the voters were happy to see them go.

Nonetheless, Cort van der Linden never wavered in his conviction that he had been right to make the preservation of Dutch neutrality the mainstay of his policies: Holland would have been demolished in the war, as the Belgian example showed only too clearly. It was only after the war that the Dutch general consensus came to share this view. Until his death Cort van der Linden remained a revered elder statesman, the man who kept Holland out of the Great War. 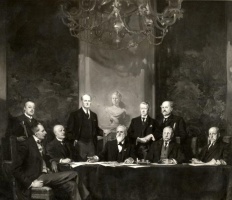