During the First World War, the Netherlands Oversea Trust Company acted as a clearing house for imported contraband goods. Although the Dutch government viewed most of the company’s actions as partisan, it prevented a conflict between the Netherlands and the Allies over vital overseas imports that might have dragged the Netherlands into the war.

Neutrality in times of War↑

Like other neutral countries contiguous to Germany, the Netherlands experienced Allied pressure to stop the transit of important goods to and from Germany. The British government’s official request on 22 August 1914 to provide a government guarantee that all Dutch imports labeled contraband by the British would not end up in German hands was denied; the Dutch government did not consider it compatible with its neutrality.

However, afraid that continuing to defy the Allies might lead to economic ruin or even war, the trade minister, Marie Willem Frederik Treub (1858-1931), and the country’s top banker, Cornelis Johannes Karel van Aalst (1866-1939), proposed that the Dutch business community might potentially give the Allies the assurances the government was unable to provide. This suggestion was picked up by British commercial attaché in The Hague, Sir Francis Oppenheimer (1870-1961), who presented it to his government as a way to smooth Anglo-Dutch difficulties that were threatening Allied relations with other neutrals.

A committee of Dutch businessmen headed by van Aalst gave shape to Treub’s ideas. On 24 November 1914, they founded the Netherlands Oversea Trust Company (NOT, in Dutch: Nederlandsche Overzee Trustmaatschappij), which would serve as a clearing house for overseas imports of contraband goods. Anyone wanting to import overseas goods into the Netherlands had to sign a contract with the NOT, promising not to re-export these goods to Germany or any of her allies, and pay a sizable deposit. As such, the NOT served as an inspiration for both the founding of the Société Suisse de Surveillance Économique (SSS) and, to a lesser degree, the wartime activities of the Danish Industrial Council (Industriråd) and Merchants’ Society (Grosserer Societet). However, the NOT enjoyed greater autonomy vis-à-vis its host country’s government than its sister institutions, since the Pieter Wilhelm Adrianus Cort van der Linden (1846-1935) administration officially wanted nothing to do with an institution it saw as fundamentally un-neutral.

Satisfied with the Trust Company’s controls, the Allies allowed goods imported via the NOT to pass through its North Sea blockade of Germany, mandating only that any ship carrying these goods make a short stop in a British port for inspections. The businessmen who founded and controlled the NOT did demand an Allied favour in return for their cooperation, though: the exemption of several luxury Indies goods from the British contraband lists, which were sold via Holland in Germany at great profit. These exemptions suited the majority of NOT’s founding companies, heavily engaged in the Indies trade, quite well. NOT chairman van Aalst, for example, retained his presidency of the Dutch Trading Company, which was heavily engaged in shipping both coffee and tobacco from the Dutch East Indies.

The NOT directors and the British government enjoyed excellent relations throughout 1915 and 1916, as both had a great interest in the NOT’s continued operation. Meanwhile, the NOT managed to successfully defend its interests against Dutch government interference, where it was felt that the Trust Company’s actions had begun to endanger neutrality. In 1917 and 1918, however, relations between the NOT and the Allies soured as well, when the German submarine campaign made the mandatory stop in a British port nearly impossible. The Trust Company ceased operations after the signing of the Versailles Treaty. 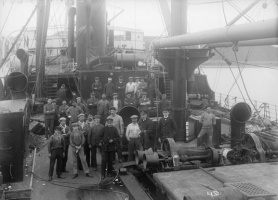