Carol I, King of Romania 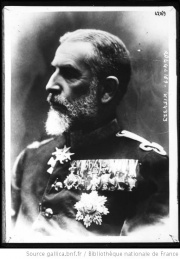 For three decades Romania’s foreign policy depended almost entirely upon King Carol I’s will. The secret alliance with Germany and Austria-Hungary was his sole political project. His death, which occurred shortly after the outbreak of the First World War, was a catastrophe for the Triple Alliance, since Romania changed from an ally into an enemy.

Carol I, King of Romania (1839-1914) aimed to bring a Western outlook into a country still dominated by an Oriental mindset. He managed to impose his will and become an arbiter of Romanian politics because “he possessed those qualities of which Romanians were totally deprived” as Liberal minister Ion G. Duca (1879-1933) wrote. Punctuality and the sense of duty were two of his main qualities.[1] He was an austere, dutiful, strong-willed king who did not indulge in personal pleasures. According to Marie, Queen, consort of Ferdinand I, King of Romania (1875-1938), Carol I was “a man who lived solely to do his work and duty”.[2] Because his principles were too harsh to be applied in a society pervaded by a Balkan spirit, King Carol I earned the respect rather than the sympathy of his subjects. A rigid yet fair man, he wanted to be a role model for Romanian politicians, who considered themselves to be above the law. He kept his subjects at bay throughout his reign. He had a specific manner of greeting his interlocutors; few had the honour of shaking hands firmly with King Carol I, as he only touched his subjects’ hand with one or two fingers.

The well-informed Romanian sovereign concerned himself primarily with politics and always wanted to learn more. Politician Take Ionescu (1858-1922) wrote about his long personal experience with the Romanian sovereign:

He had impeccable tact, a marvellous capacity for seeing both sides of every question, tireless industry, a sound sense which could easily be mistaken for genuine intelligence, a deep sense of duty, cultivation unusual in a monarch, perfect manners, a patience which sometimes seemed, quite wrongly, like indifference, and with all this a great and quite legitimate regard for what history would say of him in the future.[3]

Recommended by Napoleon III, Emperor of the French (1808-1873), Karl von Hohenzollern-Sigmaringen was a Prussian officer when he was invited to take the vacant Romanian throne after Prince Alexandru Ioan Cuza (1820-1873) was forced to abdicate in February 1866. In May 1866, with the discreet consent of the Prussian Prime Minister Otto von Bismarck (1815-1898), the twenty-seven year old accepted the challenge of ascending to the throne of an unknown country that was still a vassal of the Ottoman Empire. The first years of his reign were the most difficult. After he secured recognition from the Great Powers as ruler of Romania, Karl (now Prince Carol) had to reign in a country with a tumultuous political life. During the Franco-Prussian War, Carol’s position in an overwhelmingly pro-French country was so difficult that he considered abdicating. After the Balkan War of 1877-1878, he consolidated his position once Romania was recognized as a full sovereign state by the Berlin Treaty. Prince Carol was crowned King of Romania three years later, in May 1881. Rising above party interests and political pressures, he managed to turn Romania into a modern constitutional monarchy. Due to his constitutional right to appoint the prime minister, King Carol I advocated the transfer of power between the Liberals and the Conservatives, the two most significant parties in Romania. He thought this was the only way to solve the country’s political and economic problems.

King Carol I was well versed in diplomacy. He took an active role in shaping Romania’s foreign policy. His main goal was to create an alliance to protect the country’s territorial integrity against the expansionist tendencies of its powerful neighbours. He had to choose between working closely with either Vienna or St. Petersburg. The Russian threat was omnipresent in Bucharest after Romania had been forced to cede southern Bessarabia to Russia (its ally during the Balkan War of 1877-1878) in exchange for Russia's recognition of its independence. The disputes with Russia paved the way for an alliance between Romania and Austria-Hungary with Germany's vested interests in supporting it. Romania and Austria-Hungary signed a treaty in the autumn of 1883. Germany unconditionally subscribed to it the very same day. Very few Romanian politicians knew about this document. This defensive and secret alliance with the Central Powers was the underlying element of Romania’s foreign and security policy until the outbreak of the First World War.

Having gained acclaim after Romania fought in the Second Balkan War (1913), King Carol I’s reign reached its peak in June 1914. After having reigned for forty-eight years, King Carol was finally courted by the Great Powers. In a state of deteriorating health, the old sovereign hoped to die with his country at peace. His hopes were shattered by Austria-Hungary’s ultimatum to Serbia. “He was a clever diplomat, a conciliatory power, a self mediator, and one who avoided trouble, but not of a nature to risk all and weather the storm”, wrote a foreign diplomat who knew him well.[4] King Carol I was aware that Europe would erupt in war and that Romania would be unable to fulfill its obligations to Germany and Austria-Hungary because of the Romanian public’s Francophile feelings. As long as he was alive, Romania did not attack its allies. A decision had to be taken by a Crown Council, summoned in Sinaia on 3 August 1914. The old king informed the Romanian politicians of all existing possibilities. “At the end of my reign and before I die, my only wish is to build a brilliant future for Romania by putting it on a par with the Great Powers”, he told the participants in the Crown Council.[5] The great majority of political leaders voted for Romania’s neutrality. This decision was a huge disappointment for King Carol I, who was sure that the Central Powers would win the war.

After retiring to his residence in Sinaia, King Carol I lived the last few weeks of his life “deserted, almost forgotten and dead among the living”, according to historian and politician Nicolae Iorga (1871-1940).[6] His soul was tormented, as he was caught between his sovereign duties and his feelings for the country in which he had been born. He had to face attacks by the aggressive press, as well as the interventions of the Central Powers’ diplomats who insisted that Romania fulfil its obligations as an ally. Ottokar von Czernin (1872-1932), the Austrian-Hungarian minister in Bucharest, remembered that the last weeks of King Carol’s life were a torture to him: “Each message that I had to deliver he felt as the lash of a whip”.[7] Carol passed away on the morning of 10 October 1914 and was buried in the Orthodox Church in Curtea de Argeş. The impact of King Carol I’s death on Romanian foreign policy was much greater than the decision taken by the Crown Council on 3 August 1914. Prime Minister Ion I.C. Brătianu (1864-1927) finally decided which side Romania was to fight on in the First World War.