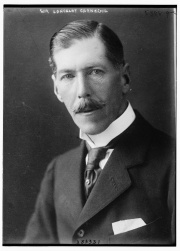 Minister plenipotentiary for England in Lisbon, there was consensus about Lancelot Carnegie as a diplomat in Portuguese public opinion. He was recognized as one of the people responsible for the consolidation of the Anglo-Portuguese Alliance. With the outbreak of World War I, he argued that Portugal should take a neutral position, committed to the Allied forces.

Carnegie attended Eton College (Berkshire) and Oxford University. In 1887, he took on diplomatic functions in the Foreign Office. He passed through the diplomatic offices of Madrid, Petrograd and Beijing while carrying out his function as a diplomatic attaché and secretary of legation. In 1906, he was a counselor in the embassy in Vienna. In 1908, he was transferred to Paris, also as a counselor. There, he ascended to the position of minister plenipotentiary (1911-1913), participating as a British delegate in the International Sanitary Conference (1911-1912) and in the international committee for the resolution of the financial problems of the Balkan War (1913).

In November 1913, he arrived in Lisbon to replace Minister Arthur Hardinge (1859-1933), whose diplomatic activities had been strongly criticized by the Portuguese Republican Party (also known as the Democratic Party). Carnegie introduced himself to the Portuguese president, Manuel Arriaga (1840-1917), with the credentials of envoy extraordinary and minister plenipotentiary of the United Kingdom, issued on 22 October by George V, King of Great Britain (1865-1936). Carnegie tried to restore the Anglo-Portuguese relationship to the desired atmosphere of cordiality, fading out the shadows of distrust, with the new republican regime, that hovered in the Foreign Office. In order to do so, he even praised the actions of the first radical government of Afonso Costa (1871-1937).

When the controversy about the Portuguese belligerence in the Great War started, the English minister in Lisbon expressed his desire to keep Portugal out of the conflict, as he did not see any advantage in its intervention. However, that did not prevent him from regularly asking - alongside with Edward Grey (1862-1933) - for the collaboration of the Portuguese government with the Allied forces in Africa and Europe. This would imply, evidently, the violation of the duty of neutrality of the Portuguese state in that conflict. On 30 December 1915, he delivered a verbal note to Augusto Soares (1873-1954) asking the Portuguese government to requisition the German ships docked in Portuguese ports and charter them to England “as might be considered advisable”.[1] He also pointed out that the Italian government, “by Royal Decree, has reserved the right to requisition all foreign vessels in Italian ports and, without declaring war on Germany, has put this right into force as regards German vessels”.[2] Despite the suggestion of the British government, the Portuguese authorities would eventually participate in the war, something that put an end to the ambiguous international position maintained until then, which was imposed solely by the will of the British Foreign Office. On 10 March 1916, Lancelot Carnegie watched the Congress of the Republic declare war on Germany. When the Portuguese Expeditionary Corps (CEP) was already fighting in Flanders, Carnegie’s action in Lisbon was relevant to allay the apprehensions that the emergence of Sidónio Pais’ (1872-1918) dictatorship raised in the Foreign Office. During this historical period, he was the carrier of the message from George V that announced his intention of raising the diplomatic representation of England in Lisbon to the status of embassy. This project was concluded in 1924. Carnegie was then promoted to the rank of ambassador, a position that he held until 1928. In this year, he left Portugal “because of the established diplomatic practice”[3], as he had reached the age limit.

During his fifteen years in Portugal, there was consensus about Carnegie in national public opinion. He was recognized as one of the people responsible for the consolidation of the Anglo-Portuguese Alliance. Carnegie followed Portuguese political and social life closely and travelled frequently across the national territory, to which he ascribed a large and unexplored touristic potential.