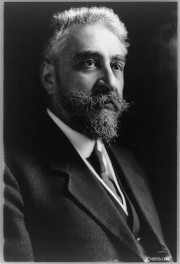 Liberal Prime Minister Ionel Brătianu led the charge to transform Romania's foreign policy, after three decades on the same side with the Triple alliance

If Ferdinand I, King of Romania (1865–1927) "was a symbol, an icon", Ion I.C. Brătianu (1864-1927) "was the real head, the power itself, the one who knew what who knew what he did, the one who pulled strings."[1] Marie, Queen, consort of Ferdinand I, King of Romania (1875–1938) uttered these words about the liberal premier who influenced the political direction of Romania during the First World War. An engineer by trade, a politician by vocation, and a historian by avocation, the powerful Romanian leader did not care about voters; his only aim was to control the existing centers of power. Intelligent, ambitious, and self-contained, Brătianu was accused of loving "power" more than anything else. In public he posed as a reluctant, indolent, and ignorant man, but few people knew him very well. Brătianu was not only well-versed in reading people but also a well-informed politician.

Brătianu’s political career was facilitated by being the eldest son of the former liberal premier, Ion C. Brătianu (1821–1891). Many important moments in Romania’s modern history - including the proclamation of independence and the formation of Greater Romania - are connected with both father and son; this has led some to acknowledge the existence of a political Romanian dynasty. The younger Brătianu became a deputy in the Romanian Parliament at the age of thirty-one. Two years later, in 1897, he was appointed minister of public works, and in December 1908 he was nominated as prime minister and took over the leadership of the National Liberal Party. Ready to continue the work of his father, Ionel Brătianu was highly concerned with how to preside over Romania. Though more conscientious of the pressing needs of Romanian society, he preferred his democratic measures to be implemented without being tabled for political discussion in advance. Therefore Ionel Brătianu performed "the most democratic policy with the help of undemocratic methods."[2] He resigned in December 1910, claiming that his party needed to be reformed. When he came back to power in January 1914, he aimed to implement agrarian and electoral reforms that were postponed for a few years by the outbreak of the First World War.

A pragmatic and cautious politician, Brătianu waited two years before allowing Romania’s entrance into the war. His long-term ambition was to form Greater Romania, more specifically to unite all Romanians in a national state, at least by annexing Transylvania and Bukovina. Brătianu’s position was strengthened when the Crown Council, an advisory body to the king, decided to maintain Romania's neutral status on 3 August 1914. The subsequent death of Carol I, King of Romania (1839–1914) served to further Brătianu’s power. Due to his significant influence on the new Royal Court, Brătianu became the architect of Romania's fate. Even under diplomatic pressure from both the Entente and the Central Powers, resulting in an inflamed state of public opinion, Brătianu "pulled the strings of neutrality in a deft way."[3] He liked to get involved in everything and trusted only himself. In a country known for its indiscreet politicians, Brătianu managed to hide his intensions adroitly so that no one should know whether and when Romania was to enter the war.

Entrance into the War↑

Negotiations between Romania and the Entente began in the autumn of 1914, when a secret convention was signed in St. Petersburg. By this convention, Russia accepted the union of Romania and the Austro-Hungarian territory inhabited by Romanians, in exchange for Romania’s benevolent neutrality. After two years maintaining neutrality, negotiations with the Entente came to an end. On 17 August 1916, in Bucharest, Brătianu and representatives of France, Britain, Russia, and Italy signed political and military conventions specifying conditions for Romania’s entrance into the First World War. This decision was ratified by the Crown Council, summoned on 27 August 1916 at the Cotroceni Palace in Bucharest. On the same night, Romania declared war only against Austro-Hungary, with its troops crossing the border into Transylvania.

The Romanian army, without proper equipment or strong leadership, simply could not fight on both the Transylvania and Dobruja fronts. The situation was complicated by the Entente’s failure to fulfill their obligations: launching an offensive in Salonika and providing a regular supply of ammunition and military equipment. The army withdrew to Moldavia, which was followed by the formation of a Brătianu-led national union government, the rebuilding of the army with the help of the French Military Mission, and the successful resistance to the Central Powers’ military offensive in the summer of 1917.

The Bolshevik Revolution in November brought yet another period of unrest for Romania. Brătianu came to the conclusion that the Romanian military’s role in the war was over; otherwise, the country "would kill itself."[4] A ceasefire with the Central Powers was reached in Focşani on 9 December 1917. "Our allies," declared Brătianu, must understand that it would be unfair to destroy Romania in order "to compensate Russia’s treason."[5] He was able to transfer power to his political opponents in order to negotiate peace. The Treaty of Bucharest signed on 7 May 1918 imposed such humiliating conditions on Romania that the country’s King Ferdinand refused to sign it.

Seen as the person most responsible for Romania’s defeat, Brătianu was eager to re-enter the war on the side of the Allies. The moment the defeat of the Central Powers became inevitable, he prepared to come back to power thanks to a transitional government led by a trustworthy man, General Constantin Coandă (1857–1932). On 10 November 1918, just hours before Germany surrendered, the Romanian army resumed hostilities on the Allies’ side. This was merely a symbolic gesture.

Back in power on 29 November 1918, Brătianu went to the Paris Peace Conference to obtain recognition of the Romanian rights guaranteed by the 1916 treaty. He was a man "accustomed to giving orders and to being obeyed from the moment he made the simplest gesture,"[6] and was thus shocked to see that at the conference the Allied powers treated Romania like an almost defeated country. Brătianu left the Peace Conference eager to resign rather than surrender. Romania needed a new government to sign peace treaties with the defeated countries, thereby solving all its territorial problems.

Brătianu came back to power in 1922 so as to enforce his ambitious reform plan. A new constitution, the enforcement of universal suffrage, agrarian reform, and protectionist legislation meant to strengthen the local capital were landmark achievements of the liberal government between 1922 and 1926. In March 1926, Brătianu decided to hand over power to the leader of another party, who assured him that he would withdraw as prime minister whenever Brătianu desired. In June 1927 Brătianu came back to power for the last time. His unexpected death on 24 November 1927, shortly after the death of King Ferdinand, threw Romania into a profound political crisis. 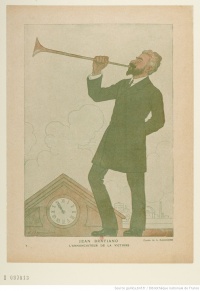