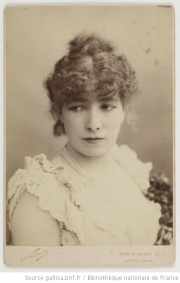 Sarah Bernhardt was a French actress. During the war, she showed great commitment to the patriotic cause through her participation in performances at the front, appearance in propaganda productions and the campaign urging the United States to enter the war.

In 1914, Sarah Bernhardt (1844-1923) was a world-famous actress who had performed in public and private theatres in Paris, managed several of them and toured extensively. Her “golden voice”[1], as Victor Hugo (1802-1885) termed it, still served her but, at the age of seventy, she was in poor health (she eventually died of kidney failure) and gangrene had developed in one of her legs (it was amputated in 1915).

After spending the first part of the war resting at her property in Belle-Isle, she resumed acting. In Mères françaises - directed by Louis Mercanton (1879-1932), released in 1917- she played a mother who lost her son in the trenches. The movie was filmed at the front and endorsed by the Ministry of War. She also premiered two plays with a patriotic content: Les cathédrales (1915) and Du théâtre au champ d’honneur (1916).

As proof of her commitment to the patriotic cause, not only did Bernhardt appear in artistic productions that celebrated French heroism but she performed for soldiers at the front in 1916. Although witnesses attested to the rousing power of her voice, a fundamental disconnect between the actress and her public remained. She once declared after a performance with the Théâtre aux Armées, “I would have wanted to die there, among them, so fraternal, so heroic, so gay, so joyous, so simply French!” but soldiers were dismissive of the moral lessons dispensed by the rear and mocked the vaunted courage of civilian actors.[2]

In the United States↑

Between September 1916 and November 1918, Bernhardt toured the United States. Her motivations for this trip were not just financial: she was campaigning to convince the United States to enter the war.

Bernhardt maintained her activity after the war. Despite her declining popularity and deteriorating health, she continued to perform, gave public lectures and wrote novels. 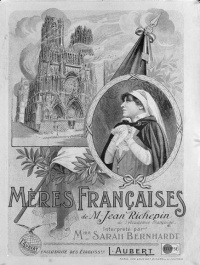 Poster for the film ‘Mères françaises’ 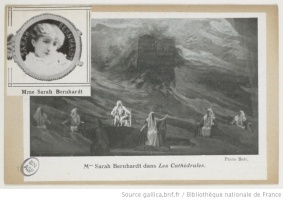 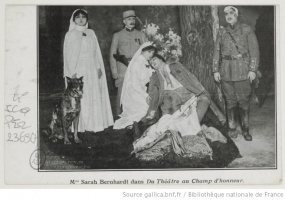