Theater at the Front

Whether on the Western or Eastern Front, by German, French, British, Canadian, American and other armies, shows were regularly organized on the front lines and at base camps during the Great War. They fulfilled an essential mission of recreation which commanders believed contributed to sustaining troop morale.

Entertainment at the Front↑

Although shows were a common fixture on the front lines and at base camps during the Great War, each country had a different approach to their organization because of their different ideas about entertainment and the different positions occupied by civilians. While the British Army invited a concert party to come from England as early as December 1914, the French Army authorized the first theatrical performance given by civilians in February 1916. In addition, while in an army of conscripts most talented performers were drafted and had little spare time, in an army of volunteers, more (civilian) professionals were available but they had limited mobility and often charged for their services.

Differing Approaches to Theater at the Front↑

Armies answered these financial, logistical and artistic challenges in a variety of ways. Until 1917, the French Army did not participate in the organization of dramatic performances. Performances were either given by the Théâtre aux Armées, a civilian organization placed under military supervision, or by soldiers themselves with little support from senior ranks. From 1917 on, the general headquarters took on a more active role. They commissioned the construction of mobile theaters and appointed managers so that, by the end of the war, the Théâtre au Front, as the project was called, had given 5,893 performances in front of 4,030,000 officers and soldiers.

The British Expeditionary Force initially resisted army concert parties as those were thought to be detrimental to the war effort. At best, concert parties distracted from the serious business of war. At worst, they could create an addiction and cause unrest in the event of a shortage. However, when the high command realized that the war would not be short and men needed to be comforted, it promoted the formation of concert parties. Amusements were organized according to a two-tier system: improvised entertainment was the rule at brigade and regimental level, while sophisticated shows prevailed at the divisional level. By 1917, each division (of about 10,000 men) had at least one military theater company. In 1918, the British Army decided to entrust a few professionals and amateurs with full-time theater duties. As a result, the division troupe gave way to a touring unit. Concurrently, there were twenty-five civilian concert parties touring the war zones, most of them performing at base camps.

Canadian and American Armies reflected yet another reality. Originally the responsibility of the British military and British charitable organizations, the entertainment of Canadian troops was eventually assigned to their Canadian counterparts. As professional entertainers were expensive, the Canadian Expeditionary Force encouraged soldiers to form their own entertainment groups. The American Army relied on the Young Men’s Christian Association (YMCA) to bring professional orchestras to the troops stationed on the front. This arrangement ensured the highest quality of performances.

The German Army also arranged for its soldiers to attend dramatic performances. Because the theatrical medium was considered inadequate, however, authorities did not use it to instill a patriotic spirit. Even after September 1917 when that ambition was officially proclaimed, programs remained recreational. In occupied territory, the Germans had access to conventional theatrical venues. Although the intention was to use these venues to display German high-brow culture, programs turned out to have a recreational content.

The repertoire ranged from music hall and light comedy sketches to opera arias and plays by established authors. Enthusiasm and patriotism were generally associated with works performed in official settings, whereas skepticism and criticism characterized soldiers’ informal productions. Most of the time, performers had to do with makeshift instruments and rudimentary props. The size of audiences varied greatly, from a dozen men to several thousands, depending on the existing facilities. As for the reaction of audiences, it was usually determined by their degree of investment in the performance. A moralistic tone combined with a hierarchical seating was more likely to generate the indifference of soldiers than a café-concert program when soldiers surrounded the performer and sang along. The fact that the majority of British concert parties charged a fee for admission to theater performances suggests that soldiers liked them. By contrast, French infantrymen occasionally complained of being forced to attend shows for the sake of their superiors’ amusement.

The organization of shows in the war zone attests to the importance of artistic practices for the well-being of strained individuals. Thanks to shows, soldiers could voice their dissent and enjoy some measure of freedom; soldiers could experience pleasure, which helped them put in perspective the horrors of war. Paradoxically, the key to sustaining troops’ morale and ensuring their continued obedience was to provide soldiers with a venue where they exerted some control over their lives. In this analysis, to give consent was conditioned upon the ability to express dissent, just as obedience was tied to a sense of agency. 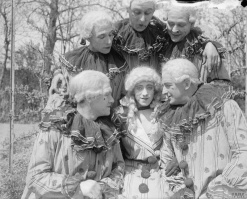 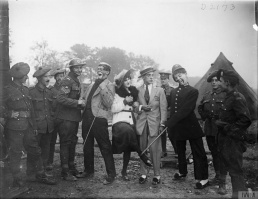 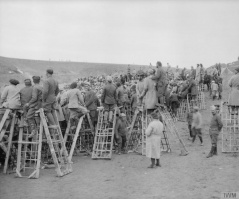 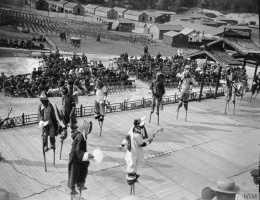 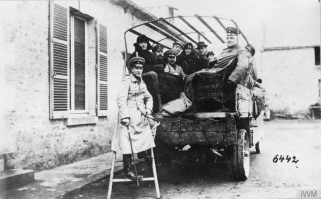 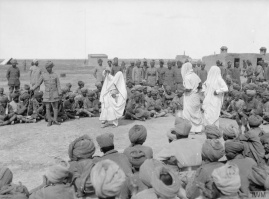 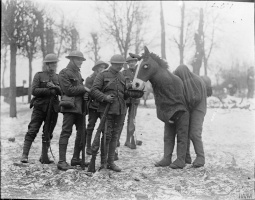 Pantomime rehearsal at the Western Front 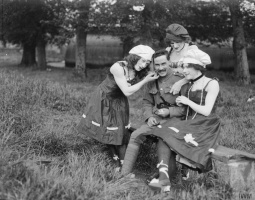 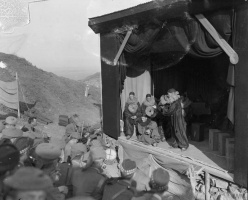 Theatre play at the Salonika front