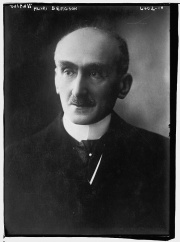 Widely known as a philosopher in France from the publication of his first book in 1889, Bergson became an international celebrity with the publication of Creative Evolution in 1907. With the outbreak of the Great War, Bergson turned his attention and energy to diplomacy and worked with U.S. President Woodrow Wilson toward the development of the League of Nations.

While Henri Bergson (1859-1941) came to national prominence with the publication of his doctoral thesis, Essai sur les données immédiates de la conscience, in 1889, it was with the translation of his work into English that his international reputation and influence grew dramatically. His ideas about the continuity of time, which he called duration (durée), and the epistemological method which he advocated and called intuition excited and shocked both the academic world and the general public. His ideas were so popular that his 1913 lectures at Columbia University generated New York City’s first traffic jam. In the 1910 English edition of Time and Free Will: An Essay on the Immediate Data of Consciousness, translator Frank L. Pogson punctuates Bergson’s growing popularity by noting that “In France the Essai is already in its seventh edition,”[1] and he included a selection of books and articles dealing with Bergson featuring some 132 items. The range of Bergson’s interests is apparent from the titles of his publications and lectures. Among the most active of Bergson’s early British supporters, professor of philosophy at King’s College London, Herbert Wildon Carr (1857-1931) laid out Bergson’s first U.K. lecture schedule in the introduction to his little handbook, Henri Bergson: The Philosophy of Change (1911). This included two lectures at Oxford University on The Perception of Change, and the Huxley Lecture delivered at the University of Birmingham on Life and Consciousness, published in the Hibbert Journal in October 1911. He also delivered four lectures at the University of London on The Nature of the Soul.[2]

In 1913, in anticipation of Bergson’s New York lectures, Columbia University librarians compiled a fuller, if still partial, Contribution to a Bibliography of Henri Bergson, with an “Introduction,” dated 12 December 1912, by the eminent pragmatist and Columbia University professor of philosophy, John Dewey (1859-1952). The book was presented to Bergson as a welcome gift on his arrival in New York City on 2 February 1913.

Just before the outbreak of the Great War, Bergson was invited to deliver the Gifford lectures at several universities in Scotland. One measure of their prestige is the range of contemporary thinkers who delivered this series of lectures, including the American pragmatist and supporter of Bergson’s work, William James (1842-1910), who delivered his Gifford lectures at Aberdeen and Edinburgh in 1901-1902. Bergson delivered the first series of eleven lectures on The Problem of Personality at the University of Edinburgh, but the outbreak of the war not only prevented Bergson’s second lecture series, but also turned his attention from matters metaphysical to the issues surrounding the war. Bergson was still popular among readers, but his interests had shifted to the European conflict. Bergson’s French publisher, Félix Alcan (1841-1925), noted at the end of the war, in 1918, that twenty-one editions of Creative Evolution had been published since 1907 - an astonishing average of two editions a year, for ten years.

From August 1914, however, Bergson’s attention was focused on the war. By 4 November 1914, he had written an article entitled “La force qui s'use et celle qui ne s'use pas” (“The Force which wastes and that which does not waste”) for the magazine of the Poilus (the Doughboys), Le Bulletin des Armées de la République Française. Shortly thereafter, on 12 December, he delivered the presidential address, The Meaning of the War, to the Académie des Sciences Morales et Politiques. It was translated and published almost immediately as The Meaning of the War: Life and Matter in Conflict (1915). In his introduction to the volume, H. Wildon Carr noted that Bergson’s “is a message addressed directly to the heart of our people in the crisis of war,” which derives,

from the depth of his philosophy […]. The full significance of the doctrines he has been teaching, and their whole moral and political bearing, are brought into clear light, focused, as it were, on the actual present struggle. Yet is there no word that breathes hatred to any person or to any race. It is by the triumph of a spiritual principle that philosophy may hope to free humanity from the oppression of a materialist doctrine.[3]

Subsequently, in January of 1917, the French government sent the bi-lingual Bergson to the United States as a special envoy to meet President Woodrow Wilson (1856-1924) to help overcome America’s initial neutrality in the European conflict and to urge the Americans to enter the war, which it did in April of that year. Historian David W. McFadden has called Bergson, “the main French advocate for intervention.”[4] America’s resistance was further weakened by the April torpedoing and sinking of the British ocean liner Lusitania, which had departed from New York, off the coast of Ireland. Of the 1,200 passengers killed in that attack, some 128 were Americans. Bergson was in the United States the following year for a protracted stay, from May to September, and so was in the U.S. when René Viviani’s (1862-1925) French mission arrived to discuss the extent of America’s involvement in the European conflict. Bergson later wrote the preface to Vivani’s book, La mission française en Amérique (1917).

League of Nations and the Nobel Prize↑

At this time, Bergson was also working with the Wilson government on what became the League of Nations, an organization that included representatives of all nations, established to maintain world peace. The League remained in effect until 1946 when it was replaced by the United Nations. By 1922, Bergson was appointed president of the International Commission on Intellectual Cooperation, an agency of the League of Nations. In 1927, Bergson, who suffered from crippling rheumatoid arthritis, was too ill to travel to Stockholm to accept the Nobel Prize in Literature. In 1930, France awarded Bergson the Legion of Honor (Grand-Croix de la Legion d'Honneur), the highest degree of the award. He died in Paris during the Nazi occupation in 1941, unconverted to Catholicism to offer solidarity with the oppression of the Jews, a moral position consistent with his refusal of the exemption, offered by the Nazi occupiers of Paris, from wearing the yellow Star of David required of all those of Jewish heritage. 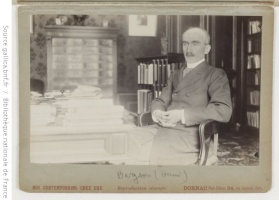 Henri Bergson at his desk