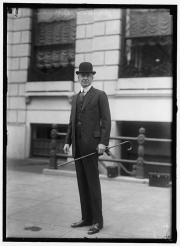 At the beginning of World War I, Bernard Baruch was one of the most famous Wall Street traders in the nation. During World War I, he served as President Wilson’s Advisory Commission to the Council on National Defense. In 1918, he was chair of the War Industries Board. Baruch also accompanied President Wilson to the Paris Peace Conference. He remained involved in national politics after the war, advising every administration until his death in 1965.

Born in South Carolina in 1870, Bernard Baruch (1870-1965) attended the City College of New York and received a classical liberal arts education. Baruch credited much of his future success to Professor George Benton Newcomb (?-1895) who taught political economy, philosophy, logic, ethics and psychology. He briefly thought about applying for entrance to West Point but a baseball injury that damaged his hearing ended that dream.

Baruch made his way into the world of finance through his mother’s efforts to secure him employment. She arranged for him to meet with the broker Arthur Houseman (? -1907), whom Baruch would work for until he had enough money to open his own brokerage house and purchase a seat on the New York Stock Exchange. Baruch then used his influence in the financial world to transition to politics. He began by supporting President Woodrow Wilson (1856-1924) with substantial donations during the election in 1914. This brought him some informal influence but not a formal position in government.

Advisory Commission of the Council of National Defense↑

As part of America’s preparation to enter combat, President Wilson appointed Baruch to chair the Raw Materials, Minerals, and Metals Committee as part of the Advisory Commission of the Council of National Defense in 1916. Prior to taking this position, Baruch divested himself most of stock portfolio to avoid any conflict of interest and invested almost 75 percent of his 10 million dollar fortune in Liberty Bonds. Baruch struggled, however, to find a specific mission for his committee. He also had difficulty financing his organization and had to pay for its offices out of his own pocket.

Although Baruch’s experience was in finance, Wilson did not seek out his advice or leadership in this area of policy. Rather, the President wanted Baruch to work on mobilizing the factories and businesses of the nation to support the war effort. Baruch’s enthusiasm worked to his advantage in overcoming the bureaucratic maze of Washington D.C. Although he had little official support for his group outside of the President, he was eager to make the most of his opportunity to support the war effort. The creation of the War Industries Board (WIB) allowed him to do so.

One of the main purposes of the War Industries Board was to ensure that the prices of the goods produced for the war effort did not lead to war profiteering. The WIB used its authority to set wholesale prices. However, this did not have an impact on retail prices, which surged in 1918 and led to a rise in the cost of living.

Baruch’s efforts on the Raw Materials Committee showed how effective he was at dealing with the bureaucratic restrictions of Washington D.C. Despite serving as chair of the WIB, Baruch struggled with the lack of official power and regulations that would give his board the authority to affect the changes needed in the nation’s supply system to mobilize it completely for war. He could encourage the use of mass production manufacturing, but he could not mandate companies change their production practices. However, he did not shy away from using his own resources to accomplish his mission. He paid for the transportation and lodging of a team of WIB members to travel to an allied government conference in London when the U.S. government did not allocate funds for their travel. He was such an effective leader of the board that President Wilson offered him the position of Secretary of the Treasury; Baruch, however declined to serve in Wilson’s cabinet.

After the war, Baruch travelled to Europe to act as an advisor to President Wilson at the Paris Peace Conference. He served on the Committee on Form of Payments of Reparations and as a member of the American Delegation to the Preliminary Peace Conference, among other positions.

Baruch was worried about worldwide economic consequences if the peace talks failed to establish a workable economic model for international growth. He did not want to put Germany in a fiscally impossible situation. This position put him in opposition to many European delegates to the conference. While in Paris, Baruch once again used his substantial resources to make the most of his position. He entertained in a way that few other delegates were able to. This gave him access to many influential peace talk participants, although this access did not always achieve the desired results.

After the conclusion of the Paris Peace Conference, Baruch tried to help the Senate pass the Treaty of Versailles. He paid $10,000 to John Foster Dulles (1888-1959) to ghostwrite his book The Making of the Reparation and Economic Sections of the Treaty, which offered a positive view of the treaties. He commissioned the work in response to John Maynard Keynes’ (1883-1946) negative portrayal of the peace treaties in The Economic Consequences of the Peace. Baruch’s efforts did not lead to American ratification, but did increase the perception of his intellectual acumen.

Bernard Baruch’s efforts during World War I allowed him to continue his political work after the war. He served as an advisor to every administration until his death in 1965. During the Great Depression, he aided President Franklin Roosevelt (1882-1945) and helped with the formation of the National Recovery Administration. The WIB made it beneficial for companies to work together. It also had the authority to limit their access to raw materials or commandeer their facilities. This authority would be part of what gave the National Recovery Administration its enforcement powers. Through World War II, Baruch continued serving President Roosevelt and advised the President on many issues relating to war production.