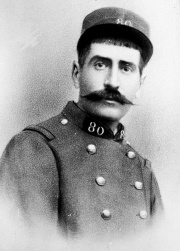 A barrelmaker in a French village and corporal at war in an infantry regiment, Louis Barthas was considered the spokesman of his squad. He wrote a reliable testimony about his experience fighting in the trenches. His book was the first of many published from ordinary people’s diaries and letters.

Louis Barthas (1879-1952) was an excellent pupil but did not advance to secondary education. Even with little education, he had an openmindedness that led him to further his studies on his own. He became a barrelmaker, which led him to become a member of the Socialist Party and a reader of Le Midi socialiste, the daily newspaper edited by his friend Léon Hudelle (1881–1973).

In August 1914, at the age of thirty-five and married with two sons, Barthas was mobilized. He arrived at the front lines in Artois on November 1914; he was evacuated to the rear in April 1918. He spent fifty-four months under the colors, forty-one of which he spent as corporal in an infantry regiment right at the front lines in Artois, Verdun, Champagne, Somme, and Argonne.

The corporal lived amidst the men of his squad, shared their daily life, and knew their most intimate thoughts. Barthas's comrades considered him their spokesman; he wrote against what Barthas called “Bourrage de crâne”, or “stuffing their brains with rubbish.”[1] His written testimony was addressed to posterity, even if that notion was not concretely defined. Barthas's reliability is confirmed by military sources, the accounts of other soldiers, and Captain Hudelle's collection of photographs.

In August 1916, Barthas wrote to the deputy Pierre Brizon (1878-1923), requesting pacifist brochures to distribute and discuss among his frontline comrades.[2] After the war, he returned to his village, his family, his job, and his Socialist Party.

In 1978, François Maspero took the risk of publishing Barthas’s book, Les carnets de guerre de Louis Barthas, tonnelier, 1914-1918, written by an unknown author on a subject unlikely to draw huge crowds. The bet paid off. Now in paperback, 100,000 copies have been printed as of 2014, and translations have been published in Dutch, English, and Spanish. The barrelmaker’s book has motivated his readers to undertake research among veterans, including diaries and letters from the front. As one of the first of its kind to be published, the work by Barthas has led to the discovery that ordinary people, without officers’ stripes on their sleeves, participated in history and knew how to bear witness.