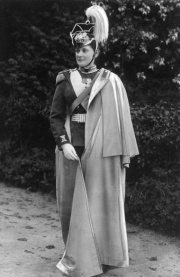 Born Princess of Hesse-Darmstadt, Aleksandra Fedorovna married the future Russian Emperor Nicholas II in 1894 and became empress. She was engaged in charity work and served as a nurse during the First World War. However, she was suspected of treason and was arrested after the February Revolution, eventually being fatally shot by the Bolsheviks.

Princess of Hesse: Upbringing and Education↑

The Princess Viktoria Alix Helena Louise Beatrice of Hesse-Darmstadt (1872-1918) was the fourth daughter of Louis IV, Grand Duke of Hesse-Darmstadt (1837–1892) and Alice, Grand Duchess, consort of Louis IV, Grand Duke of Hesse-Darmstadt (1843–1878), the daughter of Victoria, Queen of Great Britain (1819–1901). She lived in Britain at the court of Queen Victoria for much of her childhood; she was Queen Victoria’s favourite grandchild. From an early age Aleksandra was known for her poor health, introverted character, and religiousness, going on to develop an interest in mysticism and spirituality. She was educated first at home, and then she went on to complete a course in philosophy at Oxford University and receive a doctorate in philosophy from Heidelberg University.

Empress Aleksandra was chief of Her Majesty’s Life-Guards Lancers and a number of other regiments, as well as the Prussian 2nd Guards Dragoons until 1914. She officially patronised several dozen charity organisations and institutions. In 1915 she organised three military medical trains and a number of infirmaries in Tsarskoe Selo (the royal residence outside St. Petersburg) for the treatment of those injured at the front. Empress Aleksandra and her elder daughters Olga and Tatiana were trained as nurses and assisted Princess Vera Ignatievna Gedroits (1870–1932) with surgical operations. The empress was chair of the Supreme Council for the Care of the Families of Conscripts and Fallen Soldiers (1914–1917), the Special Committee to Assist Russian Prisoners-of-War (1915–1917), and an Artisanal Committee to provide subsidiary earnings to wounded and maimed soldiers and those who had suffered during the war (1915–1917).

In 1905 Emperor Nicholas II and Empress Aleksandra became acquainted with Grigorii Efimovich Rasputin (1869–1916). The empress was confident in his ability to help the heir to the throne during his haemophiliac episodes. From 1910 onwards the press actively accused Rasputin of unofficially influencing state policy, though Aleksandra’s position compelled Nicholas II to protect him. The accusations intensified considerably during the First World War.

In 1915, with the onset of military defeats and political crisis, Aleksandra began to take an active part in discussing political issues, above all concerning the appointment and dismissal of members of the government. She advocated the preservation of the strong authority of the monarchy and opposed liberal reforms. It is evident from the correspondence between Aleksandra and her husband that of twenty-eight appointments made between September 1915 and January 1917, she supported seven: the Ministers of Internal Affairs, Aleksey Nikolayevich Khvostov (1872–1918) and Alexander Dmitriyevich Protopopov (1866–1918); the Minister of Agriculture, Aleksandr Nikolaevich Naumov (1868–1950); the Chairman of the Council of Ministers, Boris Vladimirovich Shtiurmer (1848–1917); the Chief Procurator of the Holy Synod, Nikolai Pavlovich Raev (1856-1919); the Minister of Justice, Nikolai Aleksandrovich Dobrovol’skii (1854-1918); and the Minister of War, Mikhail Aleksandrovich Beliaev (1864-1918). She opposed sixteen of these appointments. Seven of her proposed candidates were rejected. There is no reason to suppose that Aleksandra’s opinion was decisive in any appointments that were made.

Starting in autumn 1915, Empress Aleksandra was widely (and unjustifiably) accused in social circles of spying for Germany. On 1 November 1916, Pavel Nikolaevich Miliukov (1859–1943) made a speech in the State Duma that hinted broadly at this. The speech was a huge success, and on the eve of 1917 plans to arrest Aleksandra and imprison her in a monastery were being discussed in social and military circles. The Provisional Government subsequently conducted an investigation but was unable to find any evidence of her having committed treason.

Empress Aleksandra and her daughters were arrested in Tsarskoe Selo during the February Revolution. In August 1917 the royal family was exiled to Tobolsk on the orders of the Provisional Government, and in April 1918 the Soviet government ordered them to be transferred to Ekaterinburg. On the night of 17 July 1918, Empress Aleksandra Fedorovna was shot along with her family and several people in their inner circle: Dr. Evgenii Sergeevich Botkin (1865–1918); their footman, Aleksei Egerovich Trupp (1858–1918); a chambermaid, Anna Stepanovna Demidova (1878–1918); and a cook, Ivan Mikhailovich Kharitonov (1872–1918). 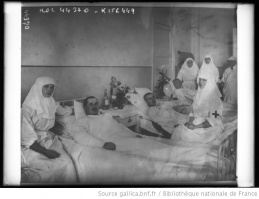 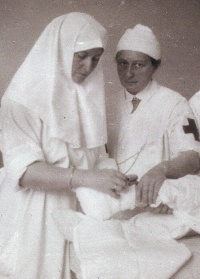