Wolffs Telegraphisches Bureau was a news agency that was the central source for news in Germany during the war. Because of censorship mechanisms, newspapers tended to reprint Wolff’s news verbatim. The quality of Wolff’s news inspired many complaints, but the government’s use of this news source made it indispensable.

Wolffs Telegraphisches Bureau (WTB) lay at the heart of the German government’s information strategy. During World War I, all belligerent countries established regimes of censorship and propaganda. While these took different forms in different countries, news agencies were critical everywhere.

Wolff was founded in 1849 in Berlin and had functioned as the semi-official news agency of the Prussian, and then German government, since the late 1860s. WTB was like a news wholesaler, supplying information to its retail clients — newspapers. It was privately owned by a consortium of four banks, successfully staving off a takeover attempt by Alfred Hugenberg (1865-1951), a nationalist politician and industrialist, during World War I. The firm’s semi-official status meant that it distributed government news and had priority on telegraph and telephone lines over other media companies. In return, Wolff had to check with the German government about the suitability of distributing politically sensitive news items.

When World War I broke out, the German government looked to Wolff to control the dissemination of information. The press law of 1874 decreed that freedom of the press could be withheld during war. The German government swiftly did just that. The Oberste Heeresleitung (OHL), or Supreme Army Command, immediately consolidated Wolff’s control over military news dissemination. The OHL provided news to Wolff first, and then issued an order in August 1914 that allowed the press to print only Wolff’s version of army reports. The press had to name Wolff as their news source. As the government’s censorship rules were fairly complex, newspapers tended to reprint Wolff’s news verbatim.

From April 1915 onwards, Wolff also printed and forwarded the minutes of the German government’s press conferences to provincial newspapers. Wolff generally distributed official reports, short items on specific events, as well as press commentaries from leading German newspapers. It only began to distribute any official commentary on news in the spring of 1918, when the third OHL under Generals Erich Ludendorff (1865-1937) and Paul von Hindenburg (1847-1934), started to mould press commentary to reassure the population and to counteract any potentially damaging effects of army reports from the enemy.

This system caused great discontent. Newspaper editors and publishers complained about Wolff’s apparent monopoly on news dissemination from the German government, as well as about that news’ inaccuracy and poor quality. Later in the war, politicians from the Social Democratic Party (SPD) also accused Wolff of distorting the truth. Other government officials complained that Wolff’s news did not resonate outside Germany and that it did not quell domestic discontent. The Foreign Office in particular tried to use the news agency Transocean to send news abroad over wireless. After the war, right-wing revisionists would accuse Wolff of demoralizing the population at home and contributing to Germany losing “the war of the mind”. Finally, Wolff itself suffered financial losses from disseminating so much news from the government, because the government forbade Wolff from raising the subscription costs for newspapers. By December 1916, Wolff’s costs had more than doubled. The War Ministry provided subsidies to Wolff several times, but these did not cover the news agency’s expenses.

Although Wolff supplied news behind the scenes, the agency was the central source for news for Germans throughout the war. The war transformed Wolff’s from a news agency to an instrument of government policy and a controller of the dissemination of officially sanctioned government information. The agency retained its semi-official relationship with the Weimar government and only ceased to exist in 1933-1934, when the Nazis merged it with a rival right-wing news agency to create the Deutsches Nachrichtenbüro (DNB). 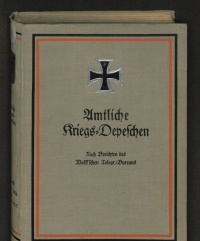