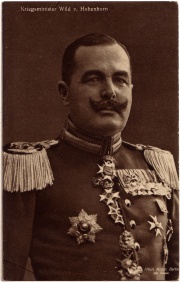 Adolf Wild von Hohenborn served as Prussian war minister from January 1915 to October 1916. He is best known for his role in the Judenzählung (Jewish census), a census of Jewish soldiers in the German army conducted by the war ministry to investigate unsubstantiated allegations of Jewish shirking.

Military Positions Early in the War↑

At the outbreak of the war, Adolf Wild von Hohenborn (1860-1925) was given command of the 30th Infantry Division, participating in the battles at Nancy-Epinal and the Aisne in September and October 1914. He was subsequently transferred to the Eastern Front in November 1914 to become chief of staff of the 8th Army, a post he held for just eight days, before serving a brief stint as deputy to Erich von Falkenhayn (1861-1922) on the general staff. On 21 January 1915, Hohenborn was appointed Prussian war minister. Despite his long-standing friendships with Falkenhayn and Wilhelm II, German Emperor (1859-1941), he was dismissed on 29 October 1916 after the formation of the Third Oberste Heeresleitung (OHL), mainly as a consequence of his personal rivalry with Field Marshall Paul von Hindenburg (1847-1934). Hohenborn had also voiced opposition to the Vaterländischer Hilfsdienst (auxiliary service law), a central tenet of the Hindenburg Program that called for all non-military men between the ages of seventeen and sixty to be conscripted for work in the armaments industry. Following his dismissal from the war ministry, Hohenborn served as commander of the XVI Corps in the Argonne for the remainder of the war.

In his capacity as war minister, Hohenborn launched an official inquiry into the number of Jewish soldiers serving in the front lines on 11 October 1916 – the so-called Judenzählung (Jewish census). The investigation was ordered in response to unfounded allegations that Jews were evading frontline service; it called for a census to determine the number of Jewish soldiers serving at the front in proportion to those stationed behind the lines in non-combat roles. Hohenborn’s anti-Semitic views were undoubtedly a decisive factor in authorizing the census, as his predecessors in the war ministry had largely ignored anti-Semitic denunciations until then in an effort to preserve the spirit of the Burgfrieden. Yet his decision must also be viewed against the backdrop of the Hindenburg Program, which demanded a systematic culling of the home-front and rear-area support units of much needed manpower for the front lines, as well as pressure from anti-Semitic circles in the army and the Reichstag to substantiate claims of Jewish shirking. Although the results of the census refuted the initial charges against the Jewish war record, the fact that they were never disclosed to the public fueled anti-Semitic rumors of Jewish cowardice after the war.