The Vienna Philharmonic, a music institution typical of the high bourgeoisie before the First World War, played patriotic music in many charity concerts during the conflict and was sent to neutral countries, such as Switzerland, on cultural missions. The orchestra inevitably became part of the total mobilization system in the war.

The Vienna Philharmonic as an Orchestra for High Bourgeoisie↑

The Vienna Philharmonic, founded in 1842 and moved to its new home, the newly built Goldener Saal (Golden Hall) in the Musikverein building, in 1870, was a high society orchestra during the Gründerzeit (Founding Days). From the end of the 19th century, Vienna, under the direction of Mayor Karl Lueger (1844-1910), regularly held spectacular musical events, such as the Vienna Music Festival in 1912, thus creating the image of a “Music City,” with the Vienna Philharmonic as its symbol. However, as the capacity of the concert hall (Musikvereinsaal) was rather limited and the orchestra’s subscription concerts were monopolized by the high bourgeoisie, the need for another concert hall arose at the turn of the century. The “Vienna Concert-Verein Orchestra” (founded in 1901) and the “Vienna Tonkünstler Orchestra” (founded in 1907), along with the new gigantic Konzerthaus concert hall (built in 1913) were designed to meet the broad public demand for music. These two newly founded orchestras, united as the Vienna Symphony Orchestra in 1919, catered to mass society in the 20th century, engaging in popular worker and school concerts that served as models for the charity concerts in the First World War (WWI).

During WWI, a great number of charity concerts were held in Austria and Germany. In Vienna, the “Vienna Concert-Verein Orchestra” and the “Vienna Tonkünstler Orchestra” offered such events. The charity concert was characterized by a patriotic program. For example, on 18 October 1914, the “Tonkünstler Orchestra” performed the Austrian and German national anthems (Heil dir im Siegeskranz), Ludwig van Beethoven’s (1770-1827) “Eroica” symphony, Richard Wagner’s (1813-1883) “Imperial March,” and four songs by Hugo Wolf (1860-1903).

In comparison, the Vienna Philharmonic’s program was politically quite neutral. With the exception of the first subscription concert of the 1914/15 season on 8 November 1914, in which Felix Weingartner’s (1863-1942) Overture Aus ernster Zeit (In Serious Times) was performed along with Johann Sebastian Bach’s (1685-1750) Brandenburg Concerto No. 1 and Beethoven’s Symphony No. 5, its program did not fall under the shadow of the war. Thus the orchestra’s fourth concert on 13 December 1914 consisted of Louis Spohr’s (1784-1859) Jessonda Overture, Franz Schubert’s (1797-1828) Unfinished Symphony and Anton Bruckner’s (1824-1896) Symphony No. 5.

However, the Vienna Philharmonic often took part in free charity concerts during the Great War (eleven concerts in 1914/15, four in 1915/16, six in 1916/17 and eight in 1917/1918) and played “popular” programs that were unthinkable for subscription concerts. For example, for the concert held by the Minister for War Welfare on 3 October 1914 in Konzerthaus, the orchestra played the Austrian and Hungarian national anthems, the “Burg am Rhein,”[1] Beethoven’s “Eroica”, and Wagner’s “Imperial March.”

During WWI, ethnic problems were not as acute as they were during the Nazi period, in which eleven Jewish members of the orchestra were dismissed. But one anecdote shows that shortly before WWI the conflict of national identity between the members, who came from various regions in the Habsburg monarchy (Czech, Hungary, Croatia, etc.), had already begun. On 12 July 1914 one Czech member, Karl Jeraj (1874-1951), opposed the orchestra’s participation in German nationalistic events, and was dismissed from the orchestra.

The orchestras’ concert tours, rarities before 1914, were characteristic of Austria and Germany’s cultural politics during the war. The Austrian government invited the Budapest Philharmonic to Vienna in November 1915, the Prague Opera Orchestra in November 1917, the Ottoman Turks’ Imperial Orchestra in January 1918 and the Berlin Philharmonic, conducted by Arthur Nikisch (1855-1922), in March 1918. In July 1917, the Vienna Philharmonic made a tour of Switzerland with Felix Weingartner and performed pieces by Hector Berlioz (1803-1869), Peter Ilich Tchaikovsky (1840-1893) and Beethoven to demonstrate Austria’s cultural neutrality. However, in Lausanne, near the French border, only works by Beethoven were played, and the concert in Geneva was canceled for political reasons.

The Vienna Philharmonic’s concerts were in high demand during the war, and consequently, it began to perform two subscription concerts for each program from December 1917. Many citizens in Vienna believed that it could be their last chance to listen to the Philharmonic. However, the social composition of its audience drastically changed during the war. The high bourgeoisie, which had once monopolized the concerts, had financially declined and many were obliged to abandon their seats, while those who grew wealthy during the conflict crowded the Philharmonic concerts. In this way the traditional musical life of Viennese bourgeoisie gradually declined. After the war, it was impossible for the Philharmonic to continue as an orchestra for the elite. It held a “mammoth concert” along with the Volksoper Orchestra and the Vienna Symphony Orchestra, and added Johann Strauss’ (1825-1899) waltzes, music the group had rarely performed before 1914, to its repertoire to appeal to a wider public. The orchestra toured abroad, for example in South America in 1922 and 1923, to earn foreign currency and began to offer free tickets to leftist music journalists. 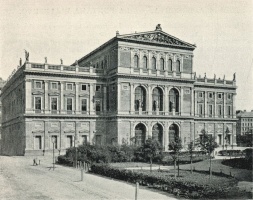