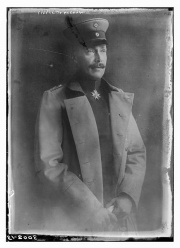 Wilhelm Friedrich Heinrich Prince of Wied, born to a German Protestant noble family, reigned briefly as Prince of Albania from 7 March 1914 until 3 September 1914. In addition to domestic issues and his lack of political experience, the outbreak of the First World War ended Wied’s short reign in Albania. After the war Wied unsuccessfully tried to achieve recognition of his rights to the Albanian throne.

Wilhelm Friedrich Heinrich Prince of Wied (1876-1945) was born on 26 March 1876 in Neuwied on the Rhine as the third son of Wilhelm Adolph Maximilian Karl Prince of Wied (1845-1907) and his wife Marie of Nassau, Princess of the Netherlands (1841-1910). He was a cousin of Wilhelm II, German Emperor (1859-1941) and a nephew of Elisabeth, Queen, consort of Charles I, King of Romania (1843-1916), born Princess of Wied. After graduating from secondary school in Jena in 1896, Wied attended the military school in Engers near Neuwied. He then served in the Guard Regiment of Wilhelm II. In 1907 he was promoted to lieutenant of the cavalry, and from 1911 until his nomination as Prince of Albania he served as a cavalry captain in Potsdam. Wied was married to Princess Sophie of Schönburg-Waldenburg (1885-1936) with whom he had two children.

Wied’s Reign as Prince of Albania↑

In 1913, when the Great Powers were in search of a monarch for the newly independent Principality of Albania, Wied was one of many candidates for the throne. Long and tenacious negotiations followed between the rivals Austria-Hungary and Italy, the two powers most interested in Albania’s future. Due to the lack of suitable candidates and the short time period allotted for choosing a prince, the decision for Wied in the summer 1913 was a compromise. With his German nationality and his Protestant denomination he was the only candidate on whom the Great Powers could agree. At the time of his candidateship, Wied was thirty-seven years old; he had only had a military education, had no political or diplomatic experience, and had essentially no knowledge about Albania. Initially Wied showed considerable reservation, but when his preconditions were largely fulfilled he accepted the offer in November 1913. Wied’s taking office was delayed, due to the incapacity of the Great Powers to agree on particular questions regarding the organisation of the principality, Wied’s hesitant attitude and lack of competence, and the friction among the Albanians. Finally, on 7 March 1914 Wied arrived with his wife and a small royal household in Durrës, the capital of the principality.

From the beginning of his reign, Wied was confronted with difficult tasks and challenges. The so-called Epirotic Question at the still undefined border to Greece, a Muslim uprising in Central Albania, and domestic intrigues limited Wied’s scope of action. Via their representatives in the International Commission of Control, the Great Powers continuously interfered in Wied’s affairs, while Wied tried in vain to operate independently. The outbreak of the First World War finally led to an end of Wied’s reign in Albania. The Great Powers withdrew theirs troops from Albania, the gendarmerie officers that Holland had provided returned home, and the financial support that Wied had been promised ceased. On 3 September 1914 he abandoned Albania without formally abdicating.

There are diverging opinions as to the reason for Wied’s short reign (he ruled for less than seven months). He was accused of ignorance and indecision, while others argued that Wied’s reign was doomed to fail from the start. Even if the circumstances did not allow him to conduct a resolute policy, Wied failed to utilise the relatively strong position the Albanian constitution of 1914 offered him. As a consequence, the conflicts and tensions between the powers of the Dreibund and the Entente as well as between Austria-Hungary and Italy also entered Albanian politics and dominated the meetings of the International Commission of Control. Furthermore, the choice of Wied’s political advisers in his personal civil cabinet proved rather unfavourable. The prominent posts were assigned to an Austro-Hungarian and an Italian councilor who viewed each other as political rivals and thus complicated any successful work. Particularly problematic was Wied’s decision to rely only on foreigners and not to incorporate Albanian advisers, a fact which was heavily critised by the Albanian government. Wied seems to have been easily influenced, scared of making decisions, and generally fearful. He was persuaded by the Austro-Hungarian councilor to dissolve his civil cabinet, but only hesitatingly took the subsequent necessary steps. Additionally, Wied was not involved in the formation of the agreement that granted autonomy to Northern Epirus and that was the result of negotiations between the European Great Powers and Albanian and Greek politicians. His escape from the capital for a few hours during the Muslim upheaval was also detrimental, as was his indulgent attitude toward Essad Pasha Toptani (1863-1920), an influential leader in Central Albania who in the first government of the Albanian principality held both the post of interior minister and defence minister. In contrast to his wife, Wied had little interest in learning Albanian, a fact that created a severe communication problem with the local population. He was quite withdrawn from the Albanian people and government; he did not take part in the meetings of the Albanian government, had no direct contact with the Albanians, and did not visit the different parts of Albania.

Wied never abdicated the Albanian throne. Together with his wife, he expected to eventually return to Albania. While initially Wied seems to have intended to wait out the war in Romania, he instead decided to serve in the German army in Flandern under the nom de guerre of the Count of Kruja. Germany’s defeat in the First World War made it impossible for Wied to return to Albania. In 1917, Wied composed an eighty-two-page Memorandum on Albania with his views and memories of his short reign. The aim to achieve recognition of his rights to the Albanian throne remained illusive. After the war, Wied lived with his wife and two children, Marie Eleonore of Wied (1909-1956) and Karl Viktor, Prince of Wied (1913-1973), in Tyrol and then in Munich. In 1925, he moved with his family to Romania where he died in 1945. Until his death, Wied carried the title of Prince of Albania, which is also written on the gravestone in the Lutheran church in Bucharest where he is buried. 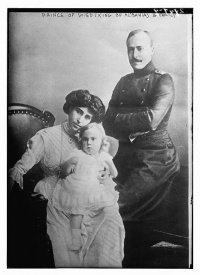 The Prince of Albania and the Royal Family 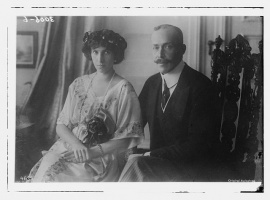